Soleil Royal by Deagostini (version 2.0 I continue to work on the gun ports, while also working on lighting the interior decks 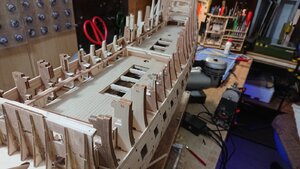 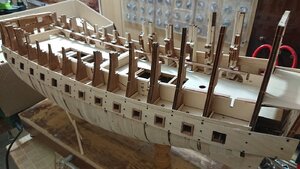 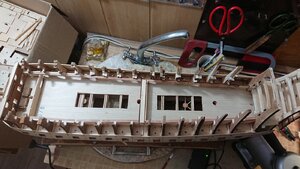 I think that Deagostini have actually improved the shape of the bow in the second version.The bow looks much fatter and more inkeeping with French design of the period.

NMBROOK said:
Great work after all the preparation this model is really starting to come together

I think that Deagostini have actually improved the shape of the bow in the second version.The bow looks much fatter and more inkeeping with French design of the period.

Dear friend, colleague I have a project called Soleil Royal version 2.0 . Because I don't like many things that the magazine Deagostini offers me,especially on the upper decks, about the lower decks, the magazine does not offer them at all. So what I have in my box is all I made myself. Still in the front, there is a good interesting work to do.

dantist sovereign said:
Dear friend, colleague I have a project called Soleil Royal version 2.0 . Because I don't like many things that the magazine Deagostini offers me,especially on the upper decks, about the lower decks, the magazine does not offer them at all. So what I have in my box is all I made myself. Still in the front, there is a good interesting work to do.
Click to expand...

I think you misunderstood me,You model is based on Deagostini's Second version of this ship.They changed the hull framework design and improved the shape of the hull at the same time.I realise most of what you have done is not part of the partwork.

NMBROOK said:
I think you misunderstood me,You model is based on Deagostini's Second version of this ship.They changed the hull framework design and improved the shape of the hull at the same time.I realise most of what you have done is not part of the partwork.

Yes, I understand you .But I have questions about the ship's hull, especially the bow. The time will come and we will return to this issue and talk. .

It is difficult when there are no basic landmarks, in order to correctly place the gun ports. I think the sheer and camber of the decks of the ship was the place to be, so the gun ports must be of the appropriate type. The main (1) landmark is the gon deck art. The deck I have it has a place. The gun port is a structural element: the vertical jambs are the frames, and the horizontal jambs are parallel to the deck. Therefore, in the middle of the hull, they have say square or rectangular, but closer to the bow and especially to the stern in the form of a diamond.
Other landmarks are also important. (2) forward bulkhead (first frame)
(3)Deck biked (4)the waterline. Therefore, the magazine markup does not mean anything to me.

I'm working on the gon-Dec deck a bit .
Purchased a new sander for processing the hull of a model ship. 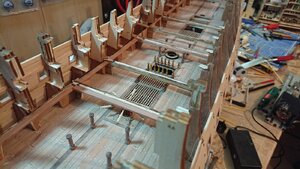 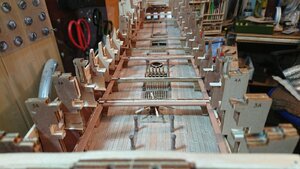 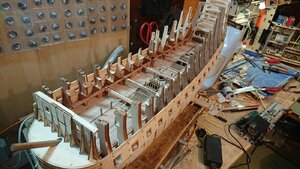 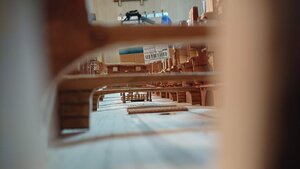 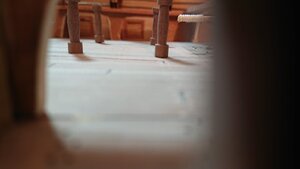 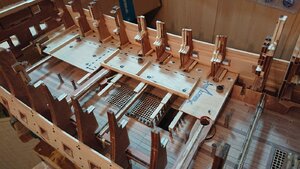 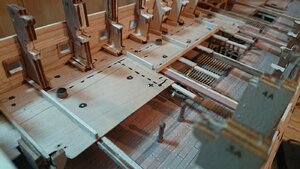 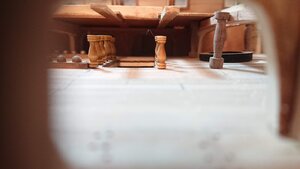 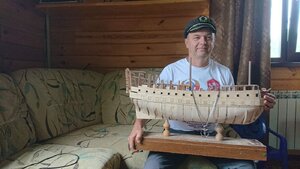 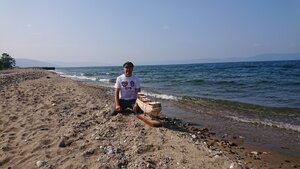 I continue to work on gun ports. Today I started lighting the deck of the gon-Dec. The first thirteen LEDs are connected in front of more than seventy
the LEDs will work. Cat gray actively helps me. 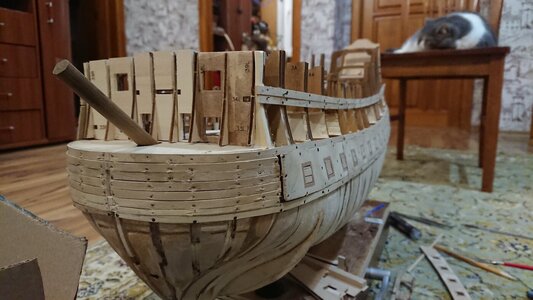 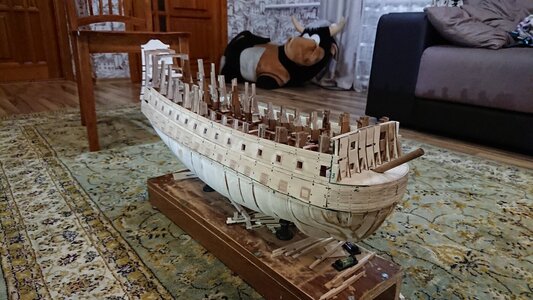 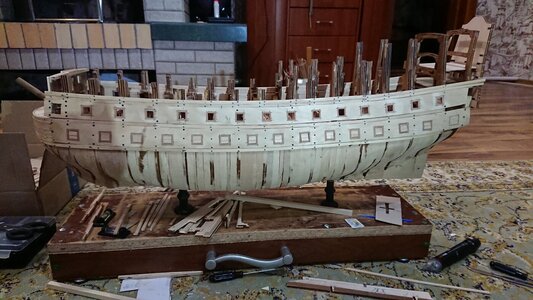 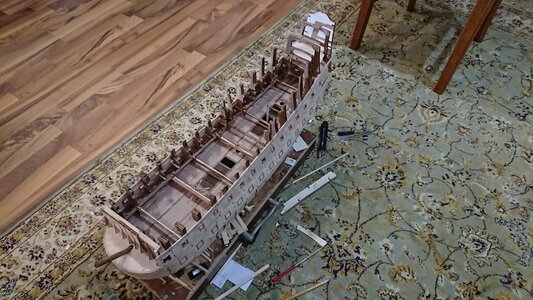 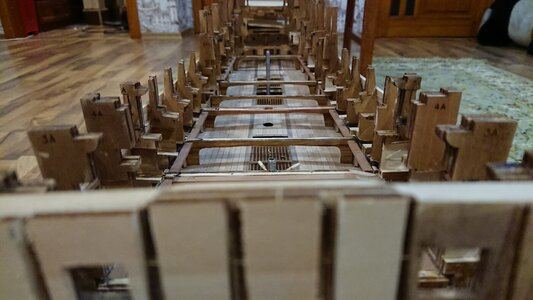 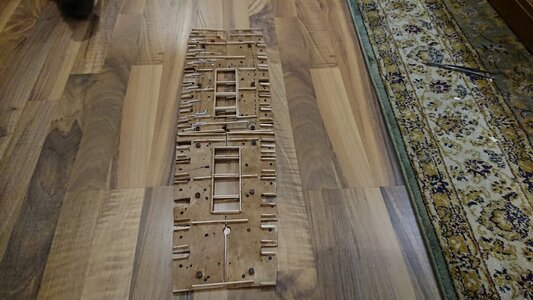 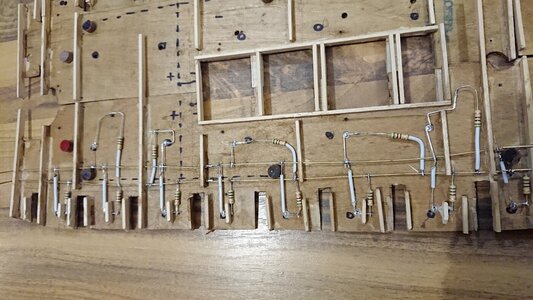 Hum I have to think about it

My imagination and great desire to bring the ship SOLEIL Royal to the state of a decent ship led me to the idea of making the interior lighting of the decks. Even at the stage of building the ship's hull by strengthening the keel frame at two points, I drilled through holes and screwed in furniture nuts in order to screw in steel tubes using the M 6 thread. They will serve the first: rigid attachment of the ship to the keel blocks.
second, wires will run inside the tube to illuminate the interior decks and cabins.
As Deagostini us does not offer such decks as gung-December and mid-December (the first and second artillery deck of the ship), that is completely fake boat turns out, I made the gon-Dec, made a deck of Reiki pear, made konopatku, pins and lusternia lattice. And in order for this to be visible through the gun ports, you need full lighting with imitation of course lanterns. Therefore, the overlap of these two decks was made of plywood with a thickness of 1 mm, where the entire electronic circuit for lighting the decks will be located.
Namely, from the bow to the stern on both sides will pass tires "-" and "+" with a copper wire of 0.8 mm. They will be soldered to a yellow led light source with a lens diameter of 3 mm GNL - 3014UYC. As a result, I use 50 LEDs for the gon-deck deck, 40 LEDs for the mid-deck deck, for a total of 90 PCs. Voltage

I will use 12 V. This is the most optimal and most importantly safe for the operation of LEDs.
Given such a large number of LEDs, I decided to use a parallel connection of all the LEDs. Because with a serial connection 90 LEDs would not have enough voltage of 12 V. When connected in parallel, creating a chain of LEDs is simple and convenient, anode to anode, cathode to cathode, which is why I have a bus running along the entire ship. So I don't have any wires! The main thing in this case is still to observe the polarity and then everything will be fine, and everything will glow. But everything will be in vain if we make just such a chain of LEDs. EVERYTHING WILL BURN INSTANTLY. If you do not observe one point. The differential resistance of an open led is too small, which causes a short circuit. As a result, all the LEDs in the circuit when connected in parallel will flash once and go out forever. To limit the led from a sharp increase in current, you need a resistor. My experiment on the video easily explains this. But if you pass the voltage

of one or two such batteries through this chain of LEDs, nothing will happen to them (LEDs). Even if you do not observe the polarity, it simply will not burn. The fact is that the current in the circuit through the battery is limited by the internal resistance of the battery. Their POWER will not be enough to harm the led.
Again, let's go back to the resistor. If we save a little money and our labor and connect a chain of LEDs in series with one resistor, this circuit will also not work, since each individual led has a different differential (internal) resistance and one resistor only limits the total current of the circuit, which then distributes throughout the chain. Therefore, according to Ohm's law, the Led with the lowest internal resistance will receive the largest portion of current, which will be greater than the nominal value, which will accelerate its destruction of the crystal and failure. And the remaining LEDs in their work distributes the burned current, which will also lead to a sharp loss of brightness. Therefore, the only sure way to buy 90 resistors and connect them in series to each led. This connection will allow you to equalize the currents in each individual led, not allowing them to exceed the operating value.
Again, parallel connection is also not super. Yes, the advantages are that you can use a large number of LEDs, if one burns out, the entire chain will work, which is impossible with serial connection. Well, the disadvantages or

well, you need a lot of resistors ( ), and also

when one led burns, the load increases on the other.
There is another optimal connection method that is combined that is, mixed and serial and parallel methods in the same chain. But this method does not suit me, then I will have to place the LEDs according to a special scheme and then a lot of wires will appear. The overall result is this when creating ship lighting. It is important to be able to correctly assemble the circuit, select the power source, correctly calculate the value of the resistor and, accordingly, the desired number of LEDs. And the most important thing is that the circuit works reliably and for a long time in the ship, the connection of LEDs without a current-limiting resistor is unacceptable!!!
Last edited: Oct 13, 2020

Hi, I’ve just taken a journey through your build log and really enjoyed it. This is a very impressive build that you are doing and you are creating a good and interesting log that is definitely one that I will follow with interest.

So, the lighting of the gon-Dec deck is finished. I will now work on the mid-deck. There is a lot of work to be done.