Stunning work sir, love the different types of wood you used.
I know it's not everyone's cup of tea, but have you considered adding figurines to make the scene come 'alive'?

I just got back from the Wisconsin Maritime Museum in Manitowoc WI after attending the 43nd Annual Midwestern Model Ships & Boats Contest and Display. This is the longest running juried model show in the country. I showed my 17th Century Battle Station and Naval cannon. There was a lot of interest, especially in the battle station. People were fascinated by the fact that the model was actually a kit we designed and produced. I had a dozen people leave business cards and place "orders" for the kit when we start to produce it commercially. Of course, I told them we had no plans to produce the kit, and didn't own the rights to the plans anyway. Nonetheless people were very interested. The NRG Director asked me to consider giving a presentation on how we came up with the idea of the kit and how we executed it at the show next year or at the NRG annual conference. As I said, a lot of interest. Thanks to Don Robinson and Mike Shanks for letting me be part of this, and all their hard work on the project. Oh, and by the way, both the Battle Station and the Naval Cannon took Silver Awards in the intermediate scratch built category!

The Best of Show this year was a magnificent scratch built POF model of the Swan Class "Atalanta" by Toni Levine. It took Toni 5 years to build the model and it is as incredible as anything I've ever seen. An amazing job! It's so great to see women active in this hobby, and achieving at such a high level. 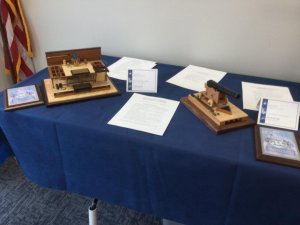 Congratulation for the Silver medal!!

Congrats, Dave! Did you have any chance to take photos of the winner model as we as other contenders models?
D

Thanks, guys! I’ll post some photos today. Lots of models in cases, so they don’t photograph well. “Atalanta” turned out fine, though (no case!).

Fantastic Dave!!! I have always stayed away from contests since my old IPMS days. But, you have done us proud!!! Was glad to be a part of it. Now only if Don and I could finish ours... LOL

I don’t care much about winning or losing...it’s just fun to share models in person. Lots of feedback and good conversation. It was a good experience.

A couple of shots of Toni Levine's "Atalanta". Best in show, voted best model by all of us who entered, and a real work of art! 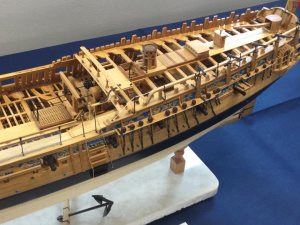 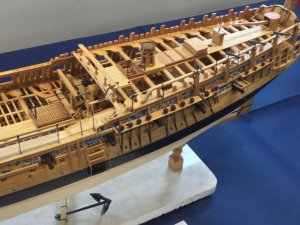 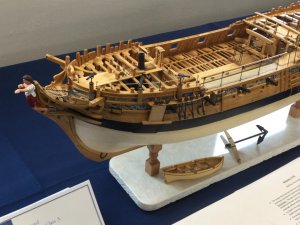 It is really a beautiful model - is the other side open without hull planking?

Uwek said:
It is really a beautiful model - is the other side open without hull planking?
Click to expand...

The starboard side is unplanked, with ribands in place. Check the chain pump housing. Toni left the cover off one side to show the pump mechanism inside. Amazing.

I don’t care much about winning or losing...it’s just fun to share models in person. Lots of feedback and good conversation. It was a good experience.

Dave,
I don't know how I haven't come across this thread before, but I just want to say the battle station looks superb. Beautifully modelled, and I've just turned green.
Surely you must be going to produce this commercially?