Hi everyone. I'm starting my first plank-on frame project. CAF's HMS Enterprise 1:48. Box one consists basically of frames 08 to 46. The instructions are a bit like LEGOS: go by the pictures, and figure it out ! I hope I don't make a lot of mistakes, but I'm sure the group here will let me know !
Since it is the first time I'm doing frames likes this, I thought about it a lot, and read many of the builds here. Thanks to all for all the info. I decided to document the building of the frames in detail..maybe the group can offer some suggestions/modifications to my method. I have finished frame 08, and I am just finishing frame 09. Here is the order: I apologize for the order in the pictures, which is not exactly chronologic, but it is easy to figure out.
1) I cut the plans into manageable sheets and stored them between two panes of heavy glass to iron them out. The frame plan is only an outline of the outboard shape of the middle (non-beveled part) of the frame.
2) I did several experiments on the best way to transfer the plan to glue the futtocks over. What worked the best is to use very thin tracing paper to trace the frame from the plans. I traced the plan over a glass surface so the tracing was completely flat. Then I used a 10x10" foam cardboard (several pieces measured and cut out from a large piece ) to which I attached the tracing paper with the traced plan using UHU stick glue and made it completely flat.
3) First, I labeled each piece with its number (from the instructions) in pencil. Next I cut out the individual futtock pieces from the wood square-Part 01 in the kit for frame 08. The futtocks are laser cut...I discovered that laser char is your friend ! If the back of the piece has no laser char, it means the laser did not go all the way thru, so I had to use an x-acto knife on the backside to free-up the futtocks on several occasions.
4) Once all the pieces for both half frames were cut out, I placed them together for dry-fit. As we all know, It was obvious that the laser cut is not 90 degrees, but at a slight angle. One can see the gaps in the joints between the futtocks. Each individual piece was sanded (very, very lightly) using a Byrnes sander to 90 degrees. After doing this, the pieces fit perfectly.
5) Once each piece was sanded and cleaned up, it was attached to the sheet of tracing paper/board with UHU glue, and each piece glued to each other with wood glue, until the bottom half of the sistered frame (or half frame ?) was completed. (all the Parts were labeled "B")
6) The second frame was a little more complicated because of the bevel lines laser etched on the futtocks for both the inboard, as well as outboard edges. I finally figured out that the inside edge of the second frame should be glued to the bevel (inside) line of the underlying frame. Doing it like this, leaves an uneven surface both inside and outside the frame, but corresponds to the amount of wood that will be sanded out later to form the inside and outside bevels for each frame...I hope i'm right !!!
7) After both half frames were glued together with wood glue, they were sandwiched between two layers of plate glass to keep them completely flat. I will leave the first frame like this for a few hours.
8) Next..I will find out how well the glued frame separates from the tracing paper, etc.... I will update.....
This is a lot of fun !.... I love being retired...
Now, I'm going to have lunch and then ride my bicycle.
Thanks
Alex Rosas 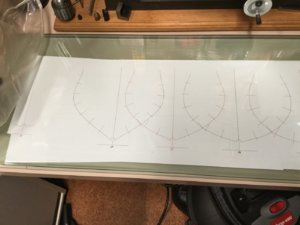 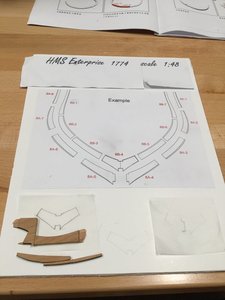 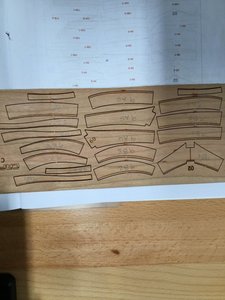 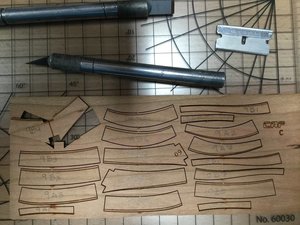 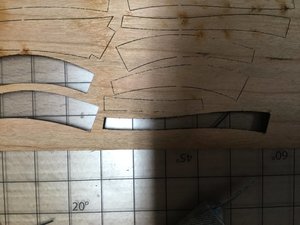 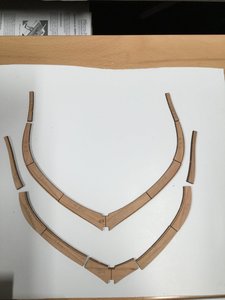 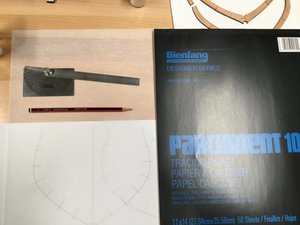 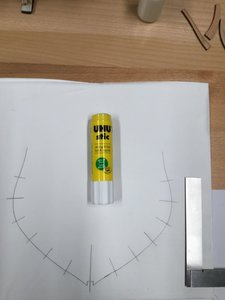 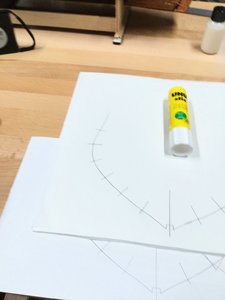 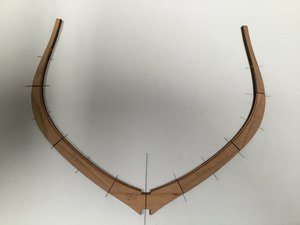 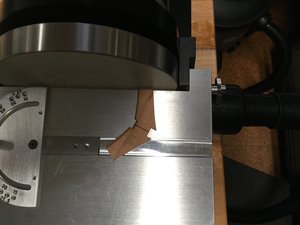 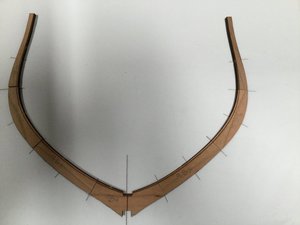 Welcome on board! I hope to see your wonderful ship here. Please keep us updated on the progress.

Am looking forward to your build, will watch with interest as it develops.
Can tell already that it will be careful, well thought out build..

I reckon this kit is the most comprehensive and detailed model available. I will be following with interest.

Hi Brian
Thanks
I saw your build of Enterprise and it inspired me to attempt the same. Your build has already been a tremendous help and guide. Let me know if you see any screw-ups ! For now, I will build 1-2 frames per day. My plan is to build the building berth and start on the keel after I've made about a third of the frames.
Alex R

I'm here to help Alex.
The plans and instructions are mostly Chinese, but anyone with a few builds under their belt can figure things our with the diagrams. 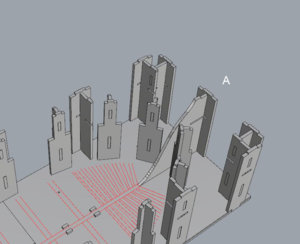 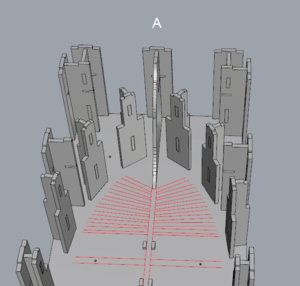 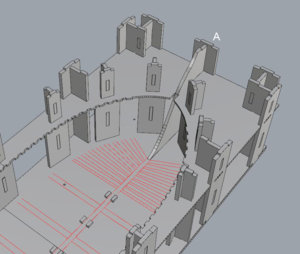 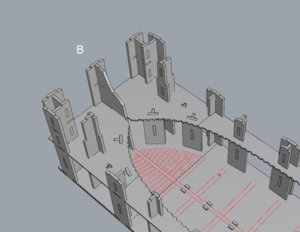 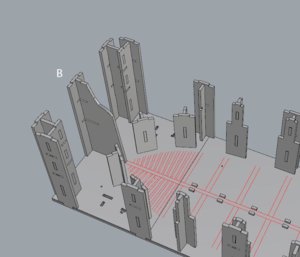 Who makes this kit?

ilanortho said:
Who makes this kit?
Click to expand... 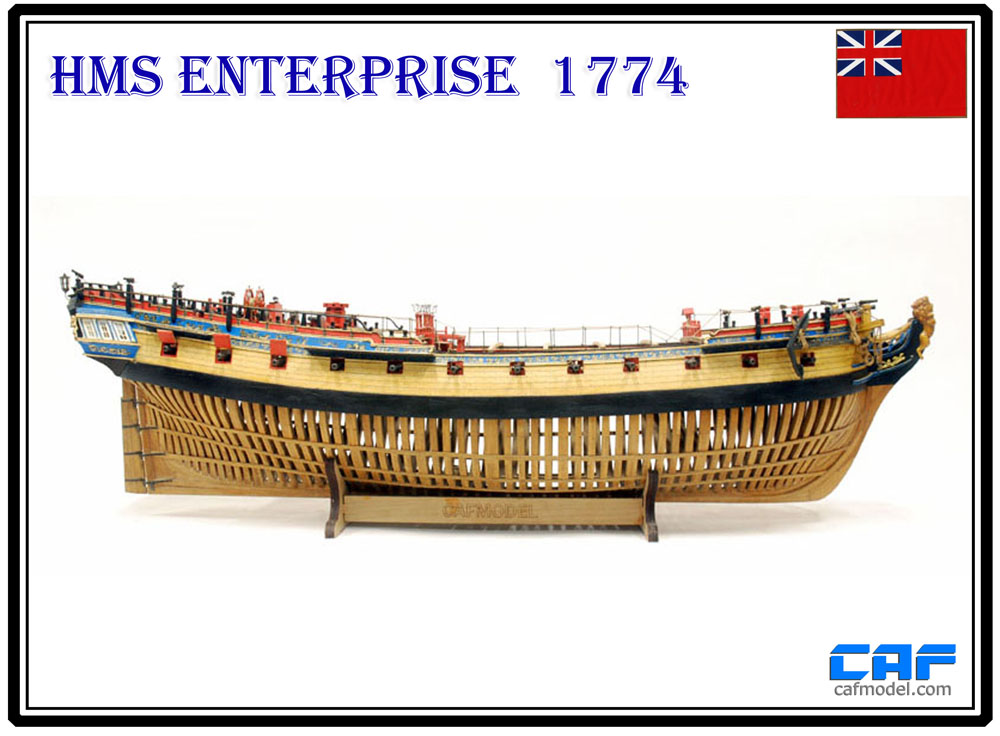 Sorry; just found it! Who is "Max" people refer to for obtaining the best price for these?
Ilan

ilanortho said:
Sorry; just found it! Who is "Max" people refer to for obtaining the best price for these?
Ilan
Click to expand...

Max is from Zhl ,he is a retailer,not sure if he is giving you better price that the manufacturer

I will definitely watch this build. I wish to build the USS Enterprise 1799 someday, but have not had much luck with finding good plans.
Last edited: Dec 18, 2019

SigEp Ziggy said:
I will definitely watch this build. I wish to build the USS Enterprise 1831 someday, but have not had much luck with finding good plans.
Click to expand...

Hi,this is not the Uss Enterprize

zoly99sask said:
Max is from Zhl ,he is a retailer,not sure if he is giving you better price that the manufacturer
Click to expand...

Hallo Alex,
I am very happy that you started the building log of this very interesting kit made by CAF. I will follow with big interest.
Maybe you know already, that Tom from CAF is also a member here in SOS, alias @CAFmodel , so you will get from us all help and assistance we can give and I am pretty sure also from our good friend Tom, who knows every single wooden piece of the kit......
Great start of the log - so post as often you can - you will have a lot of "followers"

Hallo Tom,
very interesting 3D-views of the base-jig - you know already from my Salamandre, that I like your kits and your design works very much

Uwek said:
Hallo Tom,
very interesting 3D-views of the base-jig - you know already from my Salamandre, that I like your kits and your design works very much
Click to expand...

Thank you very much.