The HMS Bellona is no doubt one of the most appealing subjects to modelmakers, the original model once being on display in the NMM in London is frankly breathtaking! So far all we had was the rather aged Corel kit and also the card Shipyard kit in the same 1.96 or 1:100 scale. When I heared of a 1:48th scale kit being released earlier this year I was a keen observer of the developements since then. The Cafmodels Bellona comes in at least five installments, yesterday I received part one. This can be purchased on Ebay for a very modest 112,- Euros. Other sellers have it on offer for 380,- US-Dollars.
Let's have a look at what I got yesterday: The kit came in a very large box in which was another slightly smaller box. There was no brand name nor even mention of what was inside.
However, the sheer amount of pieces and the quality of the material looked very promising. 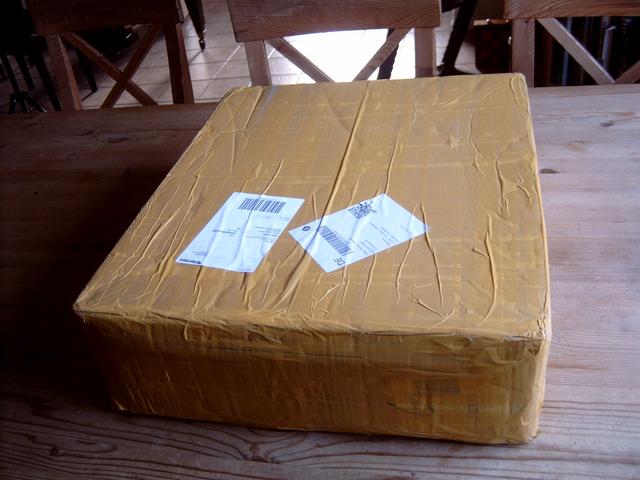 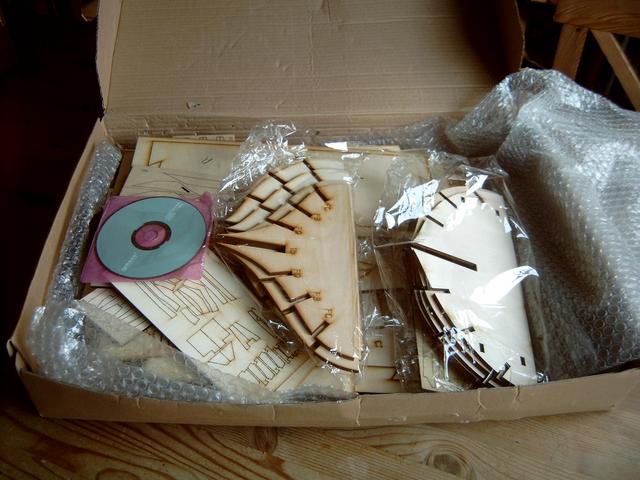 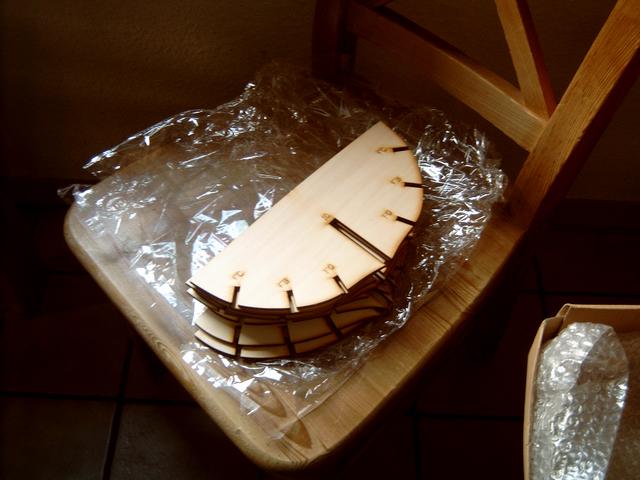 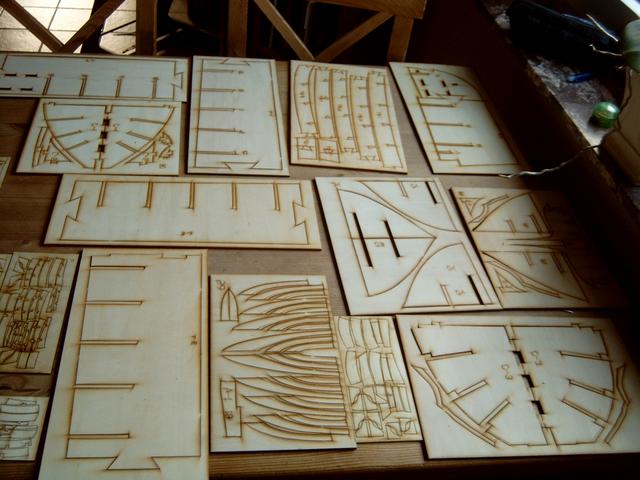 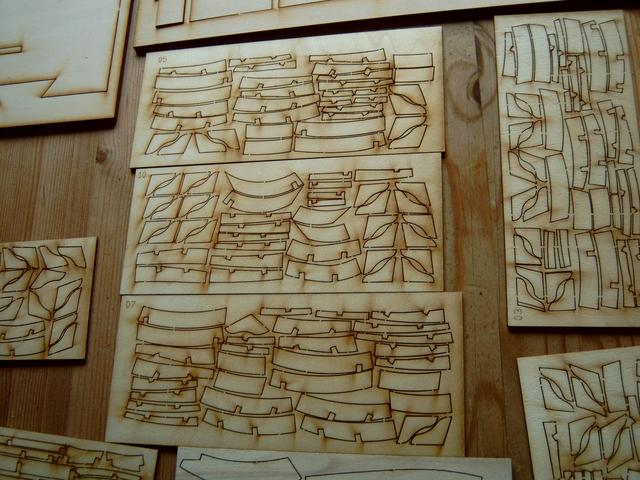 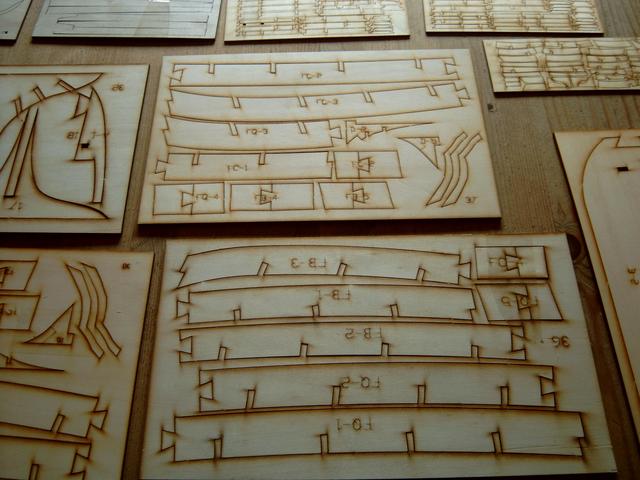 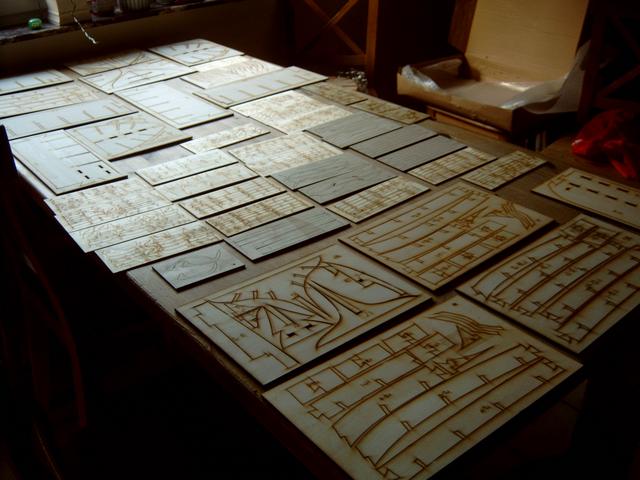 In all 44 plywood Sheets in all shapes and sizes contain hundreds of well lasered pieces. The Quality of the wood is excellent, none of the sheets were warped. Included was also a CD with 25 sheets of instruction in JPEG Format. I was quite thrilled!

This morning, I started to release the keel plate pieces from their backing sheets to check how they fit together. The keel plate consists of two layers of pieces that are supposed to line up once they been assembled. There was a problem - a BIG one! Once assembled the two keelplate-halfs didn't line up - one side was longer than the other and thus, in some places, the slots for the frames didn't line up either. I later figured out the problem was that pieces A4 and B3 were identical. Further checking showed that A4 was correct, however, B3 needed to be corrected. Some slots for frames were closed, others opened and the piece was lengthened by some 12 mm.

Once completed everything was fitted together without glueing and here is the result: 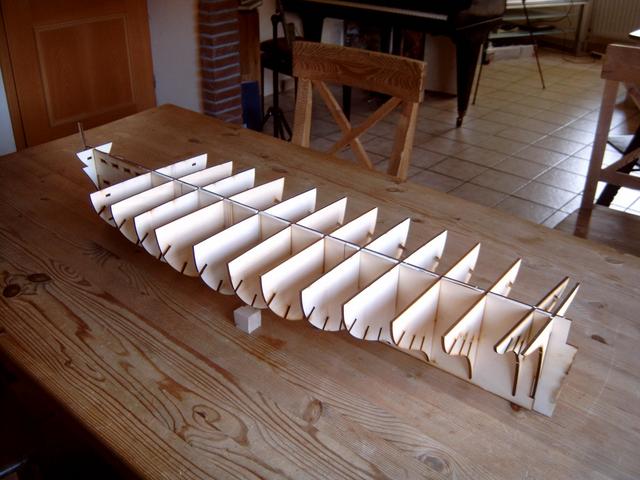 Here you can see where slots were closed and this side of the keel-plate lengthened. 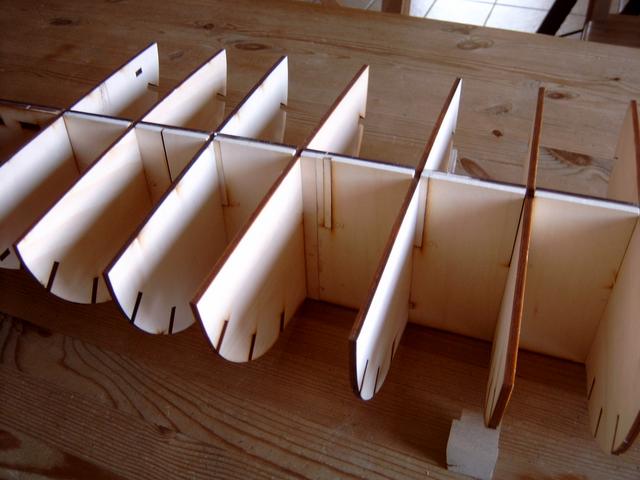 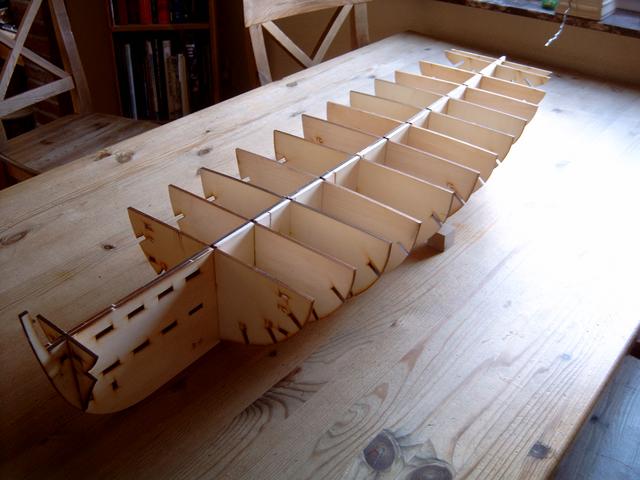 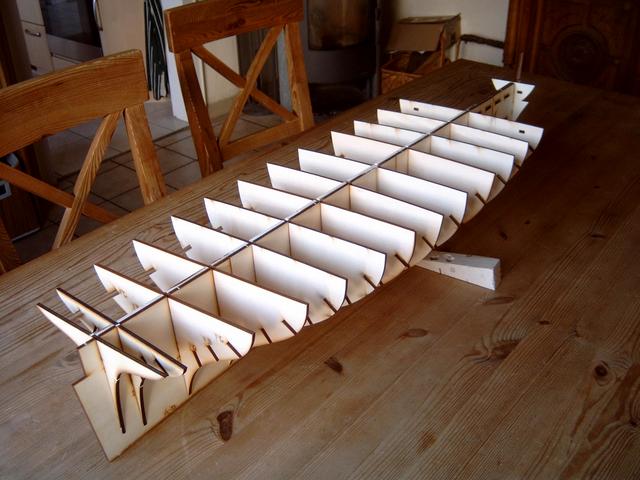 Despite the problems, I am thrilled with the result. But I am an experienced modeler and I have a well equipped workshop. I have to say that most modelmakers with little experience would be completely overtasked with these errors and would most likely give it up at an early stage. I still have to see once the hull stringers are being mounted if everything finally lines up after all.

I had some serious issues with an ebay seller who shipped he goods the same way as yours came except in my box everything was so tossed about that parts dislodged from the laser sheets the kit was missing a ton of parts including planking masts rigging and a host of other parts was a nightmare.

@epicdoom Whoever packet the pieces for my kit was thoughtful enough to secure items that might come loose additionally with tape. I was pleased to see that nothing was lost. However, as I only purchased Part 1, all I got were the hull frames.

Early this afternoon I fitted the stringers to the hull and everything fitted perfectly. The corrections that were undertook to the keelplate were doing it the right way. 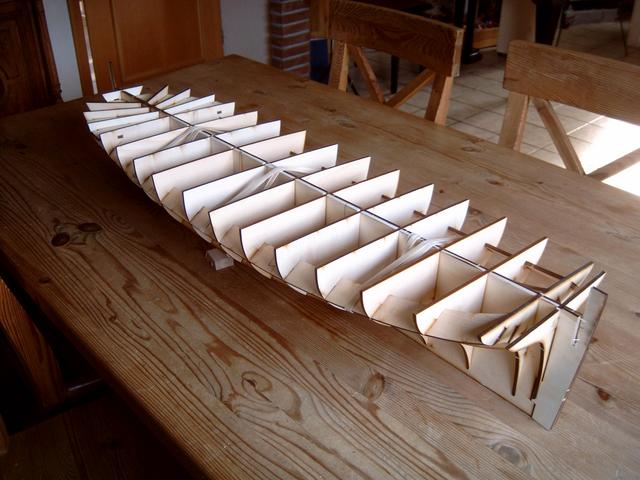 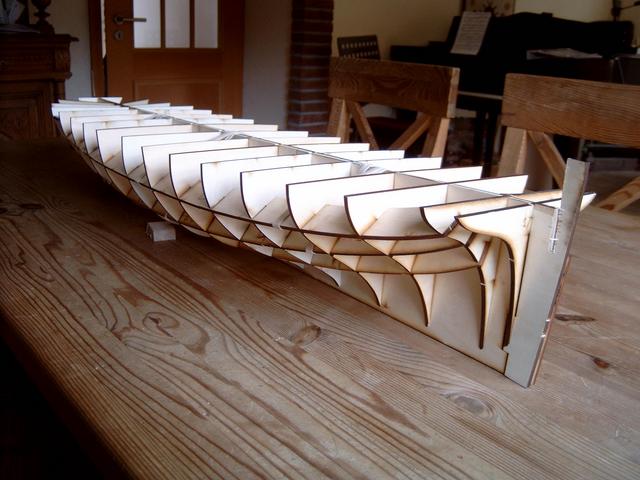 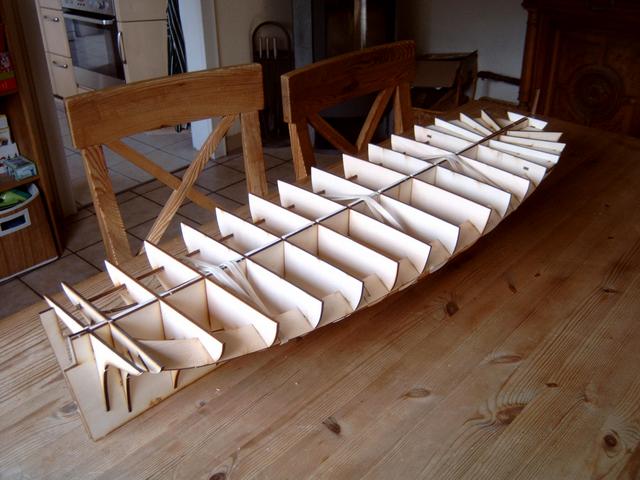 Awesome sounds like you got a better seller then I did mine was a real mess the sad part is the Kit was in no way complete but sold as such. for someone who isn't in the Know on ship construction would be in real trouble, the instructions I got came on CD but were in a format that there was nothing I could find to open it on the net. and I'm sure it would have been completely Chinese. here is what mine looked like when I opened the package the total number of planks were 18 the rest of the wood was a mix of sizes for building other elements in the kit dowels for the mast were enough for one mast and wasn't even the right diameter 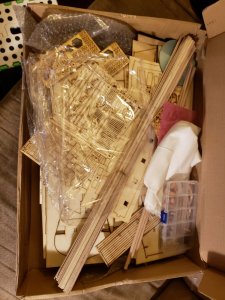 I'm so excited to see this build. It's going to be my next model after I finish H.M.S Enterprise.

I am looking forward to see the building log of this model.
Many thanks for sharing with us

Thanks all!
I'm enjoying this build. Yesterday evening I completed the stem and this morning the keel pieces were attached to it. These pieces are each built up of layers of three. The purist might want to use these as templates for drawing the pieces to pearwood and use these instead. The plywood supplied with the kit is rather soft, even indentations caused by my fingernails are visible. As the keel will be covered with copper and the stem will be painted in black later I'm not bothered about it much. You can see that I have clamped the keel pieces to a straight edge and the whole lot to the table to secure it whilst drying. 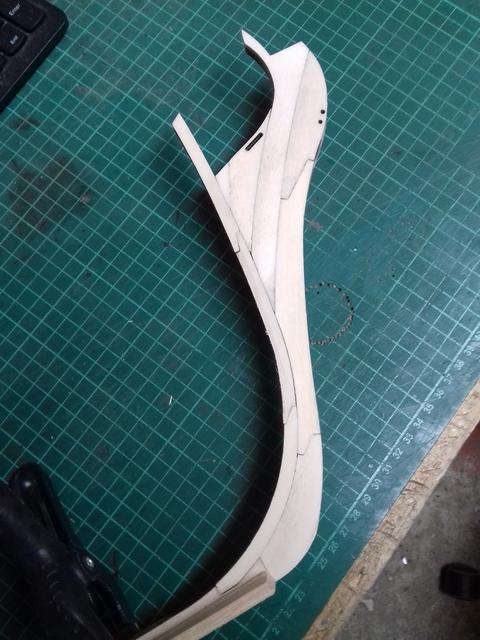 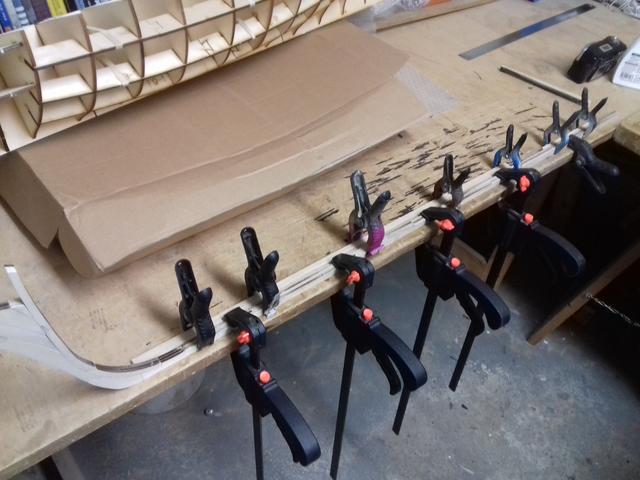 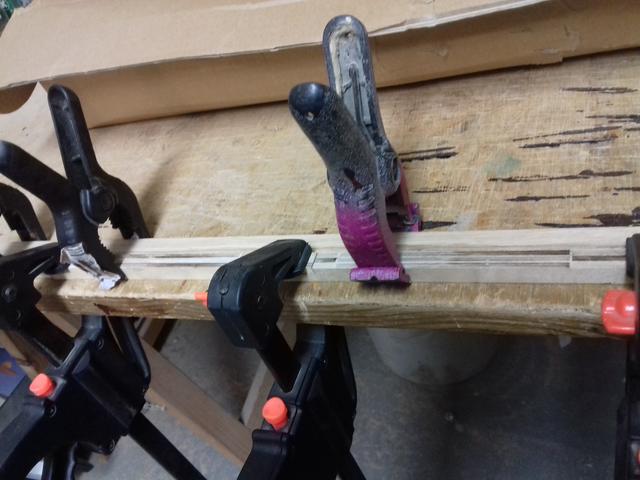 There's the next problem: There's a significant step along the bottem edges of the Frames: 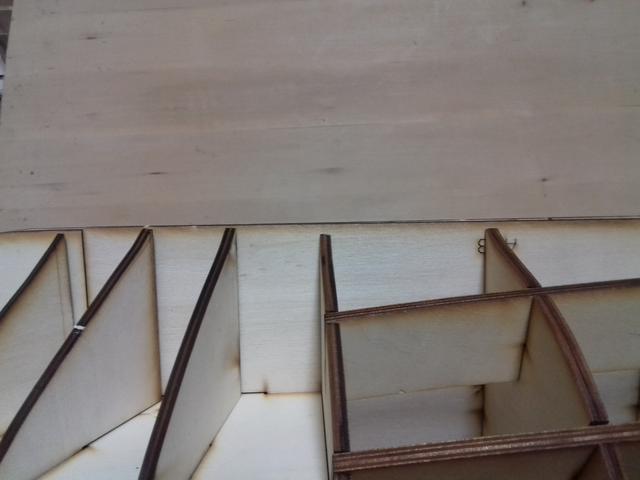 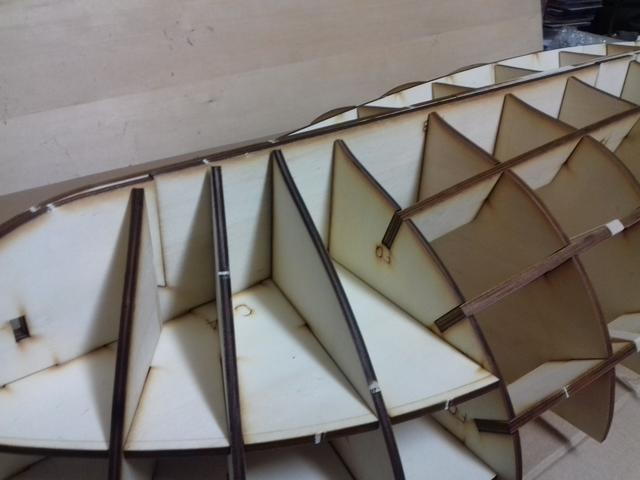 This will need to be taken care of before planking Begins.

Don't get too excited yet, Folks. I only have Part 1. Parts 2 and 3 which are only sold together will cost me an arm and a leg!

Nice work so far, what's the total cost for the build complete? I was considering a kit that comes in parts, but that would drive me batty having to wait on stuff and some that I was looking at gives you like half of the frame and bulkheads in part one then deck fittings in part 2 and a couple more parts to the frame and bulkheads in part 3 that was the deciding factor to not buy one of those type kits. This seems much better in that you get the whole frame bulkheads and all I could definitely get on board with this. Cant wait to see more of your Build.
A

The CAF Bellona is a very promising model from the pictures I have seen on the net. One question I need to ask is this a CAF product or a knockoff? There appears to be no branding anywhere, some errors in the parts and this first session is far cheaper in price than normally quoted.
Last edited: Oct 21, 2018

ADC said:
The CAF Bellona is a very promising model from the pictures I have seen on the net. One question I need to ask is this a CAF product or a knockoff? There appears to be no branding anywhere, some errors in the parts and this first session is far cheaper in price than normally quoted.
Click to expand...

How can it be a knock off when there are no other kits like this on the market ? Especially at 1-48 scale.

I also thinck this is not the caf one, this because of the low price and the soft layered wood for the keel. The keel in the caf one should be cherry according their advertisements.
See the cherry keel on their pictures compared to the light coloured wood we see here. 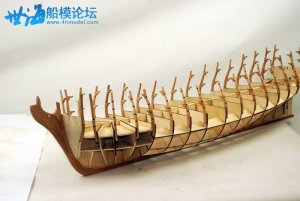 Thought a great model and I love to see more of this.

I am certain that the kit I got was produced by CAFmodels. Perhaps it is simply a cheaper version serving as teaser for the rest of the kit. Looking at the errors, perhaps it is an early test-run. Every now and then one comes across bagged Airfix kits on Ebay without boxes and instructions but brand new. Perhaps what I got is something similar to this.
Peter

Peter,
my Enterprise kit from CAF models had some minor errors, but after considerable head scratching, I managed to figure things out.

Do you still have the original link to ebay? Or was it from a private person? 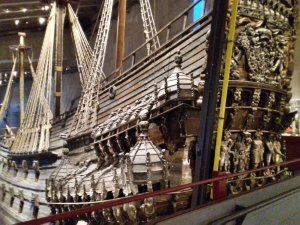 I'llpost a link when I get back home tomorrow. Right now I'm at the Vasamuseum in Stockholm

G'day Maarten I think this is the link you are looking for,

looking at the link that Neptune posted, it appears to not be the CAF kit after all.

Brian077 said:
looking at the link that Neptune posted, it appears to not be the CAF kit after all.
Click to expand...

I have to Agree Its definitely not from the same seller I got the Black Pearl from however many of these places use Multiple names for the same business the reason is because you leave them Neg feedback for not so good deals after so many people start to look at that as bad they stop selling under that name and use another till that feedback is no longer current. this leads buyers to believe the seller has fixed his issues. I know this because I was on a committee on ebay for a number of years to find and out crooked sellers. this was done independent of Ebay so they had nothing to do with it other then the Use of there forum for talking about it and Outing the crooks. We together made Purchases from different sellers that all came from the same address and often the same business names in spite of the name used on ebay. Its Unfortunate this happens, but it does and not much can be done about it. At any rate the kit seems to be ok so lets see how it goes in the Build maybe it will be OK I was a bit confused by the lack of any planking on the sellers post on ebay Maybe that comes in the next installment.
You must log in or register to reply here.
Share:
Facebook Twitter Reddit Pinterest Tumblr Email Share Link
Top