Today was devoted entirely to planking which meant that progress was S - L - O - W. Still scratching my head about how to go about doing the side planking, I decided to tackle the "deck" portion first. Now it was the turn of the planking braces at the bow to be glued into position followed by the planking of the two foremost compartments at the bow.

With the front two compartments covered the "fish tank" will be left uncovered to provide some contrast and depth to what is essentially a "flat" boat. This is where we are now.

Not being able to escape the dreaded side planking any longer I turned my attention to try and figure out a way of two separate planks following the same curvature with no bulkhead as guide. Section by section, I glued the edges of the two planks together with CA. When I more or less had what looked like one plank in the middle (in the unsupported area) I very gently started securing the whole thing to the bulkheads at the stern and bow. When all of that was done, I cut a brace which I glued to the inside of the planking to provide extra support to the middle-joint of the two planks. After that everything was clamped and left to dry.

I'm reasonably happy with how that turned out, but the acid test is going to be to see the planks bends. At the bottom of the plank it is still not secured to the bulkheads, s tomorrow I will have to bend it into position to glue the bottom edge to the bulkheads.

Thank you all for your interest and for watching.

Lovely wood. Is it swiss pear? Keep up the great work.

Gennaro, yes. It is indeed Swiss Pear. Thank you for the kind words.

I have received good news that my Kolderstok Batavia has cleared both customs offices in Shanghai and Suzhou respectively. You can imagine that things are not back to normal in China yet, so I was expecting long delays at customs. However, thanks to an unbelievably effective government and fast and efficient dealing of the virus-crisis, things are looking up. I will start a comprehensive build log once the kit arrives, but in the meantime I was just fooling around today - creating a kind of 1/3 cross section of the way I imagined the Batavia's masters' cabin could have looked like. Please bear in mind that there are no plans for this; neither did I have any idea of scale - just a photograph. However, I was keen on finding out two things:
1. The effect of some form of illumination in the master's cabin and
2. The effect of Tung Oil on the Pear Wood. (this can be employed later on the Sampan, even though that has been placed on hold with the imminent arrival of the Batavia.) 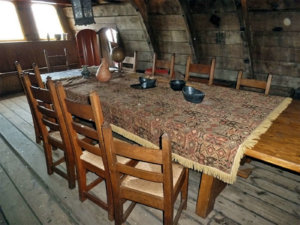 The Captain's cabin on the Batavia replica at Lelystad. 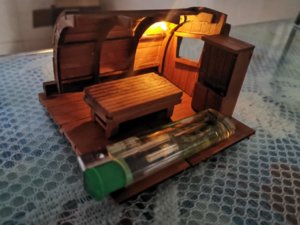 My interpretation (much more crammed), but I did not have more scrap wood!

Hi Heinrich,
Hope you will receive your kit asap, looking forward to your review and blog.

Hallo @Heinrich ,
we wish you all the Best and a HAPPY BIRTHDAY
Enjoy your day and Keep Care

Thank you so much for the birthday wishes, Uwe! It is sincerely appreciated!

Happy Birthday, Heinrich! Best of luck, and many more years to come happy and healthy!

Thank you very much for the good wishes, Jim. It is a pity that most members are so far from me; otherwise you could have dropped in for some birthday cake! 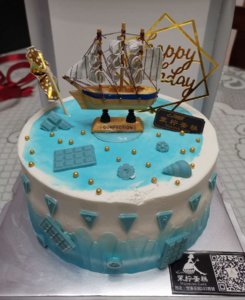 WOW JUST WHAT MY DOCTOR WILL NOT ALLOW, OH BOY JUST FOR A BITE LOL. Don

That's really craftmanship to make such a cake, and I am sure it is delicious. Enjoy, today is your special day. Why not to have the best of it (including the cake)

Thank you so much guys and to make it even better my KOLDERSTOK BATAVIA has arrived!!!

@Don: You can tell your doctor that Chinese cakes are very light in texture, is not too sweet and contains lots of fruit!

Heinrich said:
Thank you so much guys and to make it even better my KOLDERSTOK BATAVIA has arrived!!!
Click to expand...

This are really good news - so just in time as a Birthday present!
Hope you will show the kit in a kit review.....

I will do a kit review, Uwe and probably a build log.

I have posted the Kit Review on the Batavia under Kit Reviews. The Build Log will start next week.