This is the tentative start of a build log for a Colchester smack, which is a type of fishing craft that worked out of the Colne and Blackwater rivers in Essex in the 19th and 20th century. Many of these craft still survive as yachts and I live only a couple of hours away from where they can be seen. I will be using the plans in the Chatham Directory of Inshore Craft which were drawn by the naval architect Maxwell Blake. I have to get these enlarged as the originals are in a private collection and I don't know who owns it.

My model will be built at 1:24 or 1/2":1' in Imperial. This has the advantage that 1mm is about 1" in scale terms which makes sourcing the timber rather easier. There is lot of drawing to do which I will continue in parallel with working on my car project which is 1930 Singer Light Six which hasn't been on the road since around 1970. The model will form a nice contrast to the rather large and oily car!

I will probably go for sycamore or lime although I have to find a decent source. I have made a start in the meantime by getting most of the car stuff out of my main workshop and trying to establish a boatyard in its place. I have acquired some machine tools since I made Leon as a student with hand tools on the kitchen table so I hope these will help me make a boat that is worthy to sit alongside the quite outstanding models I watch develop on this forum. 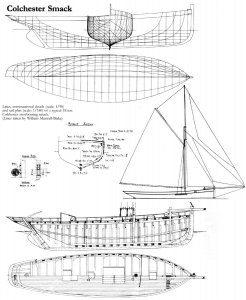 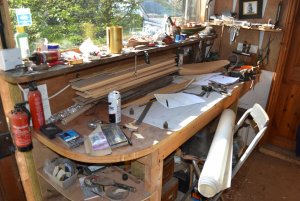 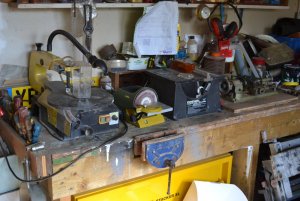 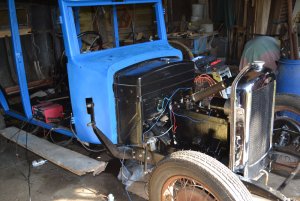 Greetings Colin. Thank you for the decision to share (tentatively ) you build log, looks like an interesting boat to watch in the build. Are you planning to build a static or sailing model? If the decision made towards the static model, will it be POB or POF? Sorry, too many questions, I am very curious by nature.
C

Hello Jimsky - it will be plank on frame scale construction with about 22 double frames plus one single at the bow and the stern timbers. There are some good images on the net of similar boats being restored plus I have a really good book called From Tree to Sea by Ted Frost which tells how East coast boats were put together written by a man who was apprenticed to a shipyard in the early part of the 20th Century. So I hope to build the whole boat in miniature. 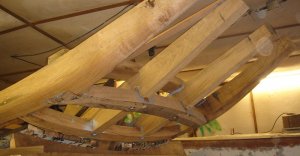 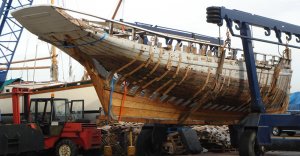 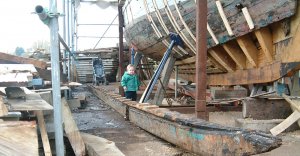 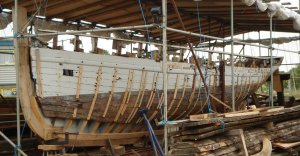 Very interesting project - I am looking forward to see this POF under construction - I will follow with big interest.

Welcome Colin and I look forward to following along.Don't know how you will find the time,your Singer is the mother of all projects

Welcome Colin. I think this boat looks very much like Jollie Brise which I have built a model of. greeting-
C

NMBROOK said:
Welcome Colin and I look forward to following along.Don't know how you will find the time,your Singer is the mother of all projects

This is what she looked like when she arrived Nigel: she had been vandalised by schoolboys in the 1970s, had been left without any care since then and had a lot of rot in the wooden frame. I have restored the rotten parts and I'm now down to paint and then the interior. I think it will be very helpful to both projects to have them run in parallel! 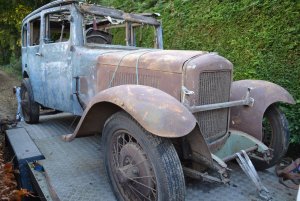 You are certainly on the home straight Colin.I take it the wooden frame provided rigidity to the body?

NMBROOK said:
You are certainly on the home straight Colin.I take it the wooden frame provided rigidity to the body?

It was the roof and floors which required almost total replacement Nigel. Fortunately the bulk of the body is aluminium so there was little or no rot other than the bonnet sections which were of steel. The new roof support structure has a certain similarity to a boat: it will be covered in leathercloth at some point! In the meantime I found a good isometric of the framing of a Colchester smack made by an owner who has restored his own boat. this helps improve my understanding of the structure especially around the stern framing. 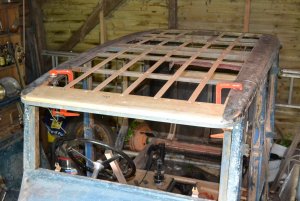 That is a very helpful drawing.There are some notable differences no doubt probably due to different builders.Your drawing show the bulwark support forming an upper futtock in places at the top of the frames where as the isometric one shows a different style with the supports completely independent and tied to the internal stringer.

On a different note,do you not fancy using something like boxwood?It is expensive,but with the fairly simple framing,you don't need masses of timber.The cost difference would not be massive.It is much easier to get a nice finish on box than say lime.Yes it is much harder but at the same time it will hold crisp edges better when you are working with small joints.A lot depends on if you are going to paint the model or leave it in natural timber.

Hello Nigel - I hope to make her look like a boat that has seen heavy work, so I will be painting her and trying to distress the parts that would have seen the most wear during a life of fishing. I think lime will be fine as I don't want a fine finish. I have found some sheets of 4mm and 5mm lime on the model dockyard site so I think I'll go for that for the keel, keelson, frames and beams. I'll think about planking later on.
C

The lime boards from the Model Dockyard arrived yesterday; very nice quality with virtually no grain and free from blemishes. I have started drawing out the keel, stem and sternpost with old tech proportional dividers and pencil on film I have had stored for many years from the time I worked for North Sea Sun Oil in Bechtel's offices. I knew it would come in handy one day! As I am building a typical smack rather than a named boat there is a bit of licence in drawing out the parts as each one was slightly different. I have managed to print off an enlargement of the sections at 1/2":1' so I'll use that as the basis for the frames. There is always a small problem with lines taken off a boat that is afloat as the sections are perpendicular to the waterline while the actual frames would be perpendicular to the keel. I don't think it will really matter as I will leave an allowance on the frames at each end for a bit of local adjustment. 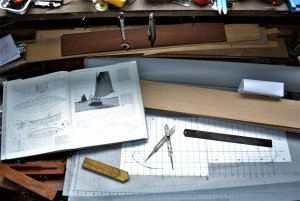 Hi,how is this project coming along?
C

Hello Zoltan. Still in the thinking about stage as the Singer Six has required a lot of attention. The car has run under her own power for the first time in 50 years so that is an important milestone. I look at the forum every day and I will start on the keel fairly soon. Regards Colin

Very impressive projects! I am especially interested in seeing your progress on the boat build.

Hallo Colin,
we all wish you a HAPPY BIRTHDAY

Thanks! I hope to start making boat parts soon although I have just bought another vintage car that needs attention.....