I just love the story of the 1609 expedition. Hudson took a bit of a detour in the Half Moon in 1609 when he was supposed to be searching for the Northeast Passage, effectively going rogue. He had sailed out of Amsterdam in April on orders to attempt to chart a Northeast Passage. When he hit pack ice yet again in the northeast, he convinced his crew to sail in the opposite direction, against his VOC orders, and the Half Moon reached the Grand Banks of Newfoundland on July 2. He explored the Canada/America coast from Newfoundland to the Chesapeake Bay and began to chart what is now the Hudson River, which he named the Mauritius. Hudson returned in 1610 in Discovery to chart what is now Hudson Bay in a search for the Northwest Passage.

I'm actually really excited for this one. It should be a nice second build for me. Just enough to challenge a noob like me with a fairly bluff bow, a lateen mizzen, and just a bit more rigging than my first build. I kind of have a thing for Dutch ships, VOC, etc, so this should be fun. I even ordered Charting the Sea of Darkness: The Four Voyages of Henry Hudson to read along as I build. 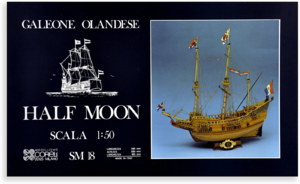 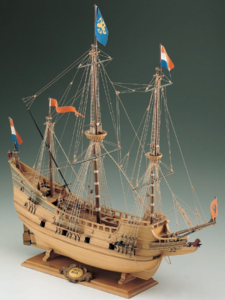 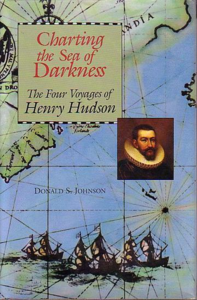 Hi Eric. Funny thing is that I have already eyed this kit on the internet. I hear good things about Corel, so, I am booking a front row seat for this one. BTW: Are you aware of the fully functional replica of the Halve Maen?

Many thanks for starting this building log - interesting ship and kit, so I will follow with big interest

Heinrich said:
Hi Eric. Funny thing is that I have already eyed this kit on the internet. I hear good things about Corel, so, I am booking a front row seat for this one. BTW: Are you aware of the fully functional replica of the Halve Maen?
Click to expand...

Hi Heinrich. Yes, thanks; I am aware of the current replica of Halve Maen..there was also one gifted by the Netherlands to the US that unfortunately burned in the 1930s.

Got the bulkhead frames assembled and the few crossbeams made for the foc'sle, quarterdeck and poop. Also added the hawse pieces (bow filler blocks) and did a bit of fairing. I'm loving the multiple decks and the pitch on stern decks.
Not sure why, but rounding and fitting those cross beams into place was sooo incredibly satisfying. I'm sensing a fully framed ships in the near future

All false decks are in place, and frames are faired. My new cordless Dremel Micro made easy work of fairing.
I'm still considering whether or not I should cut a rabbet here. Instructions do not call for it, but I think I would like to -- I am just really nervous to go hacking at my keel.
Otherwise, I'm ready for the first layer of planking. This first layer is of beechwood, as were the cross beams above. I love the feel and workability of the beech and this is the nicest wood I've seen in a kit--of course, this is only my second build, so take that for what it's worth. 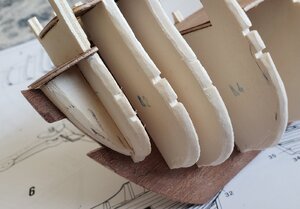 Hi Eric, looking good. I would certainly cut the rabbet if I had the choice as it will make much for a much cleaner joint at the bottom of the keel.

I did cut the rabbet, no small feat on plywood with veneer, but I think I pulled it off.

I decided to try dying the cannon holes for the gundeck openings using black india ink. (Speedball Super Black India Ink) I came across this in a discussion of ebonizing wood. I'm also planning to use this on wales, etc in the future.
This structure is a box that sits behind the planking for mounting lower deck guns without actually building out a gun deck.
I'm pleased with the result.

Made progress on the first layer of planking up to the gunwales, with significant shaping of the planking at the upper stern this morning. I think those curves are going to look really nice with some smooth, polished gunwales once those are installed. Going to need to do some serious plank steaming/bending to finish the focsle and lower planking, but I'm surprised how much smoother this is going on my second build. I guess I am teachable.

It looks very good Eric! The ship has beautiful lines, indeed. I just love those tall, narrow stern and the upswept forecastle.

I agree, @Heinrich , I love these decks and the lines of both bow and stern.
Today I managed to finish the 1st planking at the focsle--talk about lines... I love the curves where the focsle planking meets the bowsprit.
@Maarten , Does that part have a name?--that is, the foremost portion of I suppose what would be the weather deck?

I also managed to finish a little more of the lower planking to just below the waterline.

Eric. The correct terminology is the "luizenplecht" in Dutch - the only place on the ship where the crew would be out of sight of the officers - so a place where they could take things slightly more easy. "Lui" translated directly means "lazy". No wonder that the seats of ease were close by.

Heinrich said:
Eric. The correct terminology is the "luizenplecht" in Dutch - the only place on the ship where the crew would be out of sight of the officers - so a place where they could take things slightly more easy. "Lui" translated directly means "lazy". No wonder that the seats of ease were close by.

Fully correct Heinrich, nothing to add to your Dutch. .

Awesome. I love it. Thanks, @Heinrich and @Maarten!
And with that info, I found "Luizenplecht" would be "Beakhead", a term I know but wouldn't have applied quite correctly.

That's it for the first layer of planking. She sure is a chubby little vlieboot, isn't she?

A bit of progress on the second layer of planking today...

And upper hull planking is done. Now my least favorite, the lower hull. The lower hull is supposed to be done in tanganyika, but I'm not crazy about that coloration. Any reason (historical or otherwise) to stick to this, or is doing the whole thing in walnut a good option?

Quick question of advice for folks from a noob -- I'm kind of unhappy with the inconsistency of the walnut planking here. Would it be worthwhile to hit the upper hull planking with a dark walnut stain to get the coloration a bit more consistent, or will the underlying color of the wood make the stained version just as inconsistent?
You must log in or register to reply here.
Share:
Facebook Twitter Reddit Pinterest Tumblr Email Share Link
Top