ron0909 said:
What a beautiful and flawless model! This forum causes that disease that unhinges jaws allowing them to rest on the floor. As soon as I manage to pick it up, something like your build comes around and 'thud'. Is that a Camel coming to life in the background?
Click to expand...

Thank you Ron. That is a Camel.

So...
2 solutions for me:
- either I stop the construction of my Victory and I drool over the next few months on my keyboard while watching your model,
- or I continue taking a great lesson in model making!

As I know a little about the original Victory of 1765, I am even more admiring!

Ekis said:
So...
2 solutions for me:
- either I stop the construction of my Victory and I drool over the next few months on my keyboard while watching your model,
- or I continue taking a great lesson in model making!

As I know a little about the original Victory of 1765, I am even more admiring!

Thanks Ekis for your kind comments. Keep banging away at your Victory. Being a minature shipright is all fun (plus a lot of patience) and for me very relaxing. Great exercise for the brain cells too.

Thanks to all that have started following my attempt at a build log and for your likes and comments.

In Part 1, I forgot to mention another valuable resource in my library. That is the 1955 edition, "The Anatomy of Nelson's Ships" by C. Nepean Longridge. The detailed drawings and foldouts of Victory are exceptional. These were used as cross reference along with McKay's drawings for the project.

Although most contemporary Admiralty models had no cannons, I decided early on to add this level. If I didn't I might regret it later on. My early visions included the possibility of a fully rigged ship and so it would have to have sea going artillery. I seriously underestimated the scope of building a 100 gun ship of the line. The cannons and tackle added a tremendous amount of hours and really tested my patience. I often tell my friends that in the time it has taken so far I could've built three frigates. But the other side of the coin would mean I wouldn't have a three decker, the most awesome war machine of its time.

From early 1993 to mid 1995 I had made the master 32 pound barrel on my lathe, made the RTV rubber molds, and started casting 30+barrels. Carriages were constructed with the cross pieces and trucks. The cheeks I scaled on my computer, saved to a floppy disk, and I had them laser cut out of 1/8" white lexan. The completed assemblies can be viewed in the above photos. Starting amidships in 1995 six cannons have been rigged, have gunport doors, and the middle deck framing has been started. I had also decided to have the guns run out to starboard and the portside guns run in with ports closed or open for viewing, to show the lines of the ship better.

Each gun has three single blocks and three double blocks with corresponding ring bolts and lines. (And like an idiot I made the blocks). There's the breaching rope, etc. Now multiply by 104 and you can see the enormity of the task. Not saying it wasn't fun but I had to take breaks and go back to ship construction.

The middle photo above shows the mainmast stepped. All three lower masts were made to line up through each deck.

In July of 1995 I was relocated to Orlando, Florida for my work for 3 1/2 years. My wife and I decided to take the train first class with a sleeper compartment from LA's Union Station to Florida. I built a carry case with a clear lexan top and Victory made the trip safely in our compartment with us. Victory was laid up in Ordinary for over 6 years, due to other projects, before I got motivated to work on her again. Let's see...more cannons.

In Part 3 we will jump into the 21st Century.
Click to expand...

can you tell us how you made the rubber molds, great work you have done

Your work is simply breathtaking. the craftsmanship that does this beautiful ship full justice. Bravo! Hatts off!

Jimsky said:
Your work is simply breathtaking. the craftsmanship that does this beautiful ship full justice. Bravo! Hatts off!
Click to expand...

She really is a glorious representation and I would certainly be proud of what you have constructed, beautiful joinery

we wish you all all the Best and a Happy Birthday

Hope to see more about your model

Wonderful work, so precise, I only joined a few weeks ago and realise my work is just a hobby, looking at other builds I think they are masterpieces! my congratulations to these craftsman.

Many thanks to all above. I mentioned in my last update that I was working on a painting of Victory. Completed early this year, here it is.
Oil on canvas, 18x36". In the meantime I been working Victory in blocks of time when I can between paintings. A clearer shot can be seen on my website. www.anderson-art.com 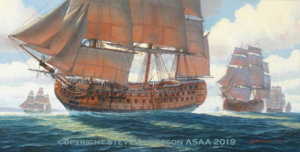 I have only just stumbled on you log.Your model is so much greater than the some of it's parts,the skills of your day job show through in the wonderful use and blends of colour.Quite simply fabulous,I love it.
Looking at your accomplishments on your website,I can clearly see why the build has been a long haul and will continue to be.
On another note,I have been thinking what a dockyard model would look like with the lower hull partly covered in planking with regard to my Saint Philippe build.I have thought about executing it in the same manner as you have done but until I have just found your log,I had failed to see an example.The 'cogs' are now turning as I ponder what to do

Thank you, Nigel for your kind and thoughtful remarks.

Google translate:
Hello Steve, A real pleasure to follow this construction. It's really a great job. Good luck in the future. I also made a model of the Victory (modern version), at 1 / 64th 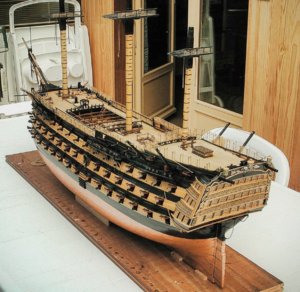