Very good work my friend !!
The ring and ringbolt with 0,5 is looking very good
Many Thanks also to Jim showing us his way - Great

Small steps with small parts.
I'm getting tinnitus in my eyes by looking at grains across a plank, so I replaced the horizontal planks on the doors: 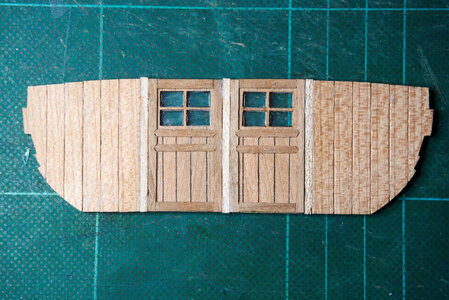 I also wanted to try if I could make some working hinges. I don't know what I do wrong but I have not had any success experiences with flames and tiny brass pieces so I did not even dare to try silver-soldering. Instead I opted for an electric solder pen and with soft solder I managed to make some small hinges out of some 0.1mm brass plate, 0,2 mm brass rod and some 0.4 mm tube. This one I discarded as I had cut one of the tubes a bit too long: 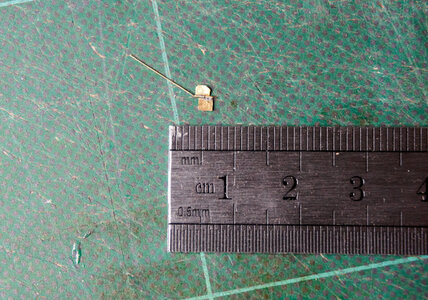 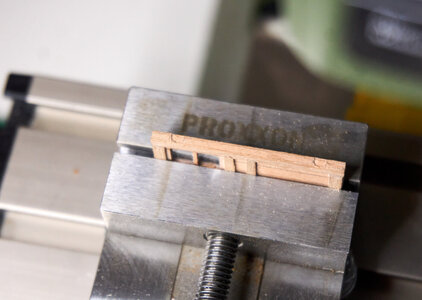 You know, presbyopia is a physiological insufficiency of accommodation associated with the aging of the eye that results in the lenses becoming less flexible so that they can no longer easily change shape to focus on close objects. Of course I do not suffer from anything like that! However, my eye lenses may have been a little dirty from the very fine cherry sand dust so I struggled a bit putting the 0.2 mm wire into the 0.4 mm tube. I think I have great potential to become an even better magician than David Copperfield because I easily got not one but 8 pcs. of 1.2 x 0.4 mm tubes to disappear completely - and I'm willing to bet a month salary (not as much as you might think) that none of them will never ever be found again.

After having glued the two hinges to one of the doors I tried to assemble the bulkhead in the hull. However, after having ripped off and even broken the hinges several times I throw them in the trash bin. I realized that the whole bulkhead structure was becoming too fragile with a loose post between the 2 doors and only the small deck beam to hold it all together. Hence I ended up gluing the doors to the posts to make the bulkhead a bit more stable. The working hinges will be replaced with fake ones.

I also tried to make moulding of the 0.4 x 1.4 mm lists around the sleeping compartments. Just for fun at it is nearly impossible to see with the naked eye - even without cherry dust on the lenses 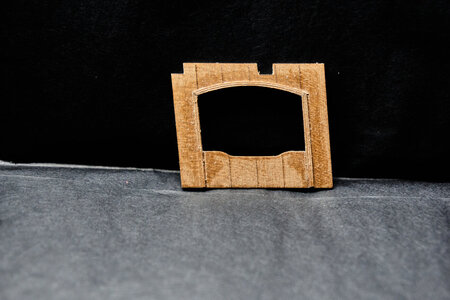 Very good, Poul!! As we say in Russia - eyes are afraid but hands are doing!!! Excellent hinges and moldings.

Excellent work, love the freeze around the bunk bed. Offcourse you in the prime of your live will be the only one who can see them with your fantastic eyes.
We only know they are there and that already gives a satisfying feeling.