I am extremely impressed! Excellent job!

Great job on the sails too. It looks like a enjoyable model to build. I just bought one along with a Jolly Roger (La Flore).

Doing your own Rat lines seems like it would be fun. To tie them the right way is Knot. (pun intended) 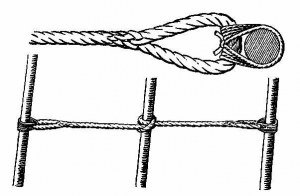 My first comment!
I had to say you are doing a great job, I have the Jolly Roger in my stash and the Kidd on my wish list. The plastic back stays look petty good on this build. I plan to post my Nina in 1/144 build soon.

SigEp Ziggy said:
My first comment!
I had to say you are doing a great job, I have the Jolly Roger in my stash and the Kidd on my wish list. The plastic back stays look petty good on this build. I plan to post my Nina in 1/144 build soon.
Click to expand...

We are looking forward to see your Nina here in our forum ......

For all practical purposes it is finally finished. I only have a very few minor adjustments and things to do (that I am aware of). Thank you everyone for all your attention and kind words of encouragement thru this 5 month build. This kit was something else. The parts did not fit good and had to wrestle with alot of things. Now, I am not complaining because I learned a lot about modeling on this project. The rigging plans were one page and had to have a magifying glass to even make anything out about it. I just tried to get as much out of this kit as I could.
Thanks again for tuning in !
Donnie

I know that there are a lot of pictures, but I am sure that someone out there would want to see as much as possible in case they are trying to build this one too.

thank you all for the kind words. When I built this model, I didn't even know the names of the ratlines and shrouds at the time, much less if the rigging was even correct. Basically, I knew absolutely nothing. I am probably about half way there (understanding) now I guess -- LOL
W

This kit was originally released as the Wappen von Hamburg. I forget which company first released it, but I remember seeing on the shelves back in the late 1960s. Revell later released it as "W v H" in either the late 1970s or early 1980s, and I have recently seen it on the shelves of one of my local hobby shops last year as "W v H". Also, please do not diminish this kind of build; it is very possible to build a serious ship model out of a plastic kit, even these Lindbergh "pirate ships". each was once marketed as models of real ships.

No, I am not minimizing this kit at all. This Lindberg Kit can be built into a really good model for someone that wants to invest time in it. That was my intent back then was to get the most out of it - granted my lack of knowledge.

Looks like Wappen von Hamburg,have built the Corel one in wood