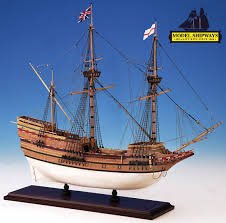 ​
The Mayflower was an English ship that famously transported the first English Puritans, known today as the Pilgrims, from Plymouth, England to the New World in 1620. There were 102** passengers, and the crew is estimated to have been about 30, but the exact number is unknown. This voyage has become a cultural icon in the history of the United States, with its story of death and survival in the harsh New England winter environment. The culmination of the voyage was the signing of the Mayflower Compact, an event which established a rudimentary form of democracy, with each member contributing to the welfare of the community.

Mayflower structure and layout
The Pilgrim ship Mayflower was a square rig with a beak-head bow and high, castle-like structures fore and aft that served to protect the ship's crew and the main deck from the elements—designs that were typical with English merchant ships of the early 17th century. Her stern carried a 30-foot high, square aft-castle which made the ship extremely difficult to sail against the wind and unable to sail well against the North Atlantic's prevailing westerlies, especially in the fall and winter of 1620, and the voyage from England to America took more than two months as a result. The Mayflower's return trip to London in April–May 1621 took less than half that time, with the same strong winds now blowing in the direction of the voyage.

No dimensions of her hull can be stated exactly, since this was many years before such measurements were standardized. She probably measured about 100 feet (30 m) in length from the forward end at the beak of her prow to the tip of her stern superstructure aft. She was about 25 feet (7.6 m) at her widest point, with the bottom of her keel about 12 feet (3.6 m) below the waterline. William Bradford estimated that Mayflower had a cargo capacity of 180 tons. Surviving records from that time indicate that she could certainly accommodate 180 casks of wine in her cargo hold. The casks were great barrels holding hundreds of gallons of Bordeaux wine each.

This ship traditionally was heavily armed while on trading routes around Europe, due to the possibility of encountering pirates and privateers of all types. And with its armament, the ship and crew could easily be conscripted by the English monarch at any time in case of conflict with other nations. By 1620, the Mayflower was aging, nearing the end of the usual 15-year working life of an English merchant ship in that era. (Wikipedia)
(More later on in this post)
** Some lifeboats on cruise ships today can accommodate 150 people.

(1) Oh! Sailor that upon the sea
set sail to see what you could see.
You left some friends upon the shore,
remember them, remember me
while finding isthmi to explore. 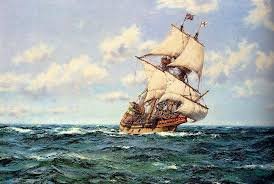 (4) Your sloop like life will fall and crest,
strict discipline will serve you best.
Grab hold the rudder, keep straight the way,
with lessons learned you'll pass the test.
Keep us in mind, of this I pray.
Return to sail another day.
Charles Hutchinson 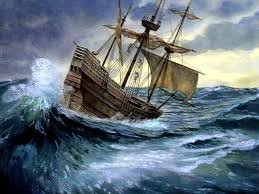 Some members may remember this model, I purchased it from Donnie and carried on the build. Then due to unfortunate circumstances the images were lost and as it turned out so was the build log, so I have started it up again with some images I happened to find on a memory card for one of my cameras.
In this image the hull has now been planked and the first coat of white wash applied. 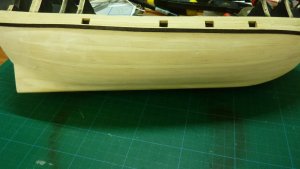 In the next series of pictures the main deck is being assembled. 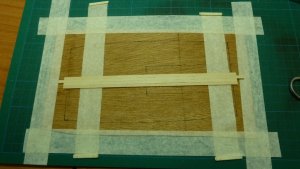 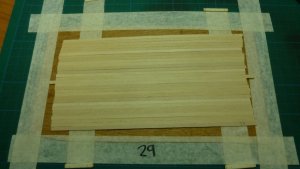 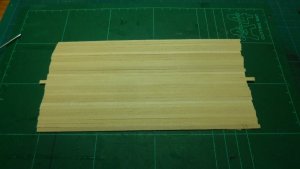 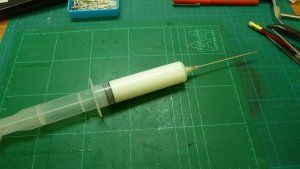 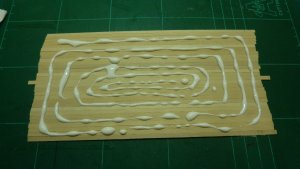 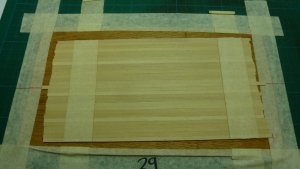 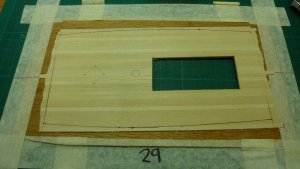 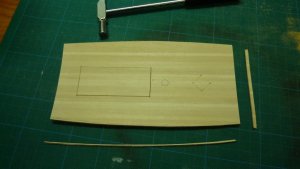 and my own personal and portable glue applicator. 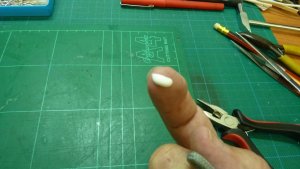 General layout
The general layout of the ship was as follows:
Main deck
Aft on the main deck in the stern was the cabin for Master Christopher Jones, measuring about ten by seven feet (3 m × 2.1 m). Forward of that was the steerage room which housed a whip-staff (tiller extension) for sailing control, rather than a wheel as in later ships. Also there was the ship's compass and probably also berths for the ship's officers. Forward of the steerage room was the capstan, a vertical axle used to pull in ropes or cables. Far forward on the main deck, just aft of the bow, was the forecastle space where the ship's cook prepared meals for the crew; it may also have been where the ship's sailors slept.
The poop deck was above the cabin of Master Jones, on the ship's highest level above the stern on the aft castle. The poop house was on this deck, which may have been for passengers' use either for sleeping or cargo. On normal merchant ships, this space was probably a chart room or a cabin for the master's mates.

A few days ago I painted a second coat of white on the hull. The paint I used was/is white poster paint, took the hull outside to dry. Although there was sunshine the ambient temperature was very low. When I checked the hull I was horrified to see what had happened, cracks in the wood filler (which is not supposed to shrink) and planks parting also humidity was just about non existent.
The following pictures will give you an idea. 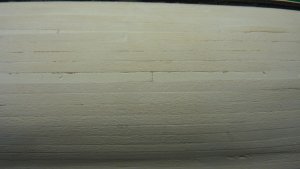 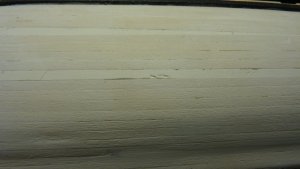 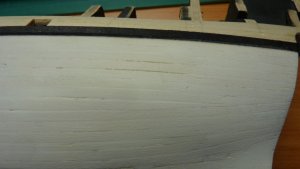 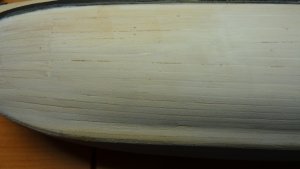 The hull has now been refilled with wood filler and sanded but not yet re-painted.
A

I always thought Queensland was always humid and the dry only for southern states.

Hi ADC, no, not always. Today it went up because there is a lot of cloud around, but when I painted the hull there was no cloud at all and breeze was coming from the west, blows the moisture back out to sea. In summer it can and has been 30C with 89% humidity and NO clouds in sight!
Last summer we had a storm steam was rising off the road out front as well as our front lawn! humidity display was off the scale, by the way my sensor is in the shade and it measured 30C in the shade, the year before it got to 38/39C in the shade so I put the sensor in the sun and three minutes later took it out of the sun for fear of damage when it reached 52C and it was still rising.
Only mad dogs and Englishmen go out in midday sun (I was born in North Yorkshire, go figure)
Regards
Eric

eric61 said:
A few days ago I painted a second coat of white on the hull. The paint I used was/is white poster paint, took the hull outside to dry. Although there was sunshine the ambient temperature was very low. When I checked the hull I was horrified to see what had happened, cracks in the wood filler (which is not supposed to shrink) and planks parting also humidity was just about non existent.
The following pictures will give you an idea.
Click to expand...

It is looking like, that your filler absorbed the fluid from the painting, afterwards it was once more drying with shrinking......strange.....
-> Means no work in sunshine anymore!

Hi everybody and thanks for all your likes and comments. The filler sets as hard as plaster and once dry will NOT soften even if left in water for weeks, I think that the wood has dried too much, we may get some rain in the next few days and if so will take the hull outside, under cover of course, for the wood to re-hydrate, failing that it looks like gloss enamel paint for the hull. The small diorama that I have in mind to display the model will cover the hull to the waterline. Still a ways down the track tho'
Regards
Eric

After some months I have almost completed the starboard side (upper) of the Mayflower, I say almost because as you will see the lowest part does not have any planking on it, more later.

The edges of the upper seven planks on the left were blacked with 3B pencil and the rest were blacked using the charcoal pencils I featured somewhere.
Can't tell the difference.

This is the inner side of the starboard upper, when I started to plank this side (first), I had not thought of using pencil on the edges. I will keep the port side consistent.
The small pin holes on the right are from the pins I used to keep curvature when the planks from the other side is drying.

As mentioned above the lower planing has not been done yet because the second planking on the hull will merge (hopefully) with the planking on the upper.
While writing this I have just checked and the fifth plank from wale will cover the join/gap, one plank somewhere upper or lower will have to be slightly narrower than the others.

View from inside. Some adjustments will have to be made because when I marked the area to be planked I did not make provision (deliberately) for the decks and walls.
Now to start on the port side and try to get it done in a couple of weeks.
You must log in or register to reply here.
Share:
Facebook Twitter Reddit Pinterest Tumblr Email Share Link
Top