I have been working on and off on the Bluenose since December. Since many have posted pics of false keel, bulkhead and planking I am picking up this log as I just completed the hull planking. I am following the Bob Hunt practicum which has been very helpful so far. As I was applying wood filler to the hull I decided to try Minwax’s wood filler. I like this product. It’s been easy to apply and sands easily. After quite a bit of hull sanding I applied a coat of Minwax Wipe On Poly. 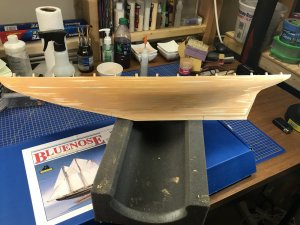 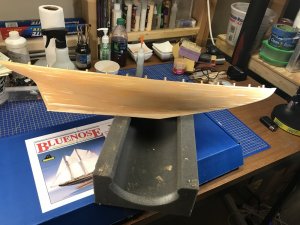 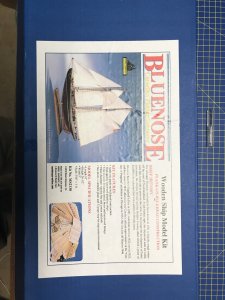 Back in the shipyard. With some nice weather in Maryland I moved the yard back into the garage to enjoy it. Finished planking the fore deck. Also painted the waterways. First try at nibbling the deck planks. Getting better as I go. I wanted the nibbling to be more visible on the deck so I went a little heavier with artist’s graphite to get them to show a bit more. May need to sand a bit more to reduce this impact a little. Not sure yet. 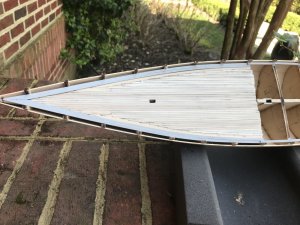 Very nice planking. What kind of varnish you are planning to use?

Jimsky said:
Very nice planking. What kind of varnish you are planning to use?
Click to expand...

I am not sure yet. I am thinking about either a weathered oak stain or leaving them alone and using poly only. Thanks for asking.

I have been working on the aft deck planking. This was a bit more tedious than the foredeck with some plank tapering required. I really don’t like the look of a deck with too much tapering so I held back a bit on this. Results are just ok. With that done next up was adding the last waterway plank on the outer portion of the deck. This required cutting several pieces to fit in between the bulkhead timbers. Also added some gray to the waterways. Next up is bulwarks and transom area.
W 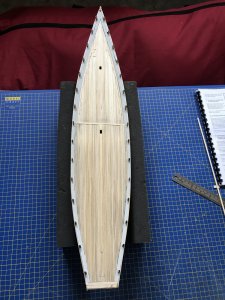 I have added the bulwarks to both sides as well as the transom top. Some work still to be done to final shape the transom but first I will be putting in the false timbers. You can see the bulkhead extensions are not consistent height. These will all be removed and replaced when other false timbers are installed. I think this is a design issue. 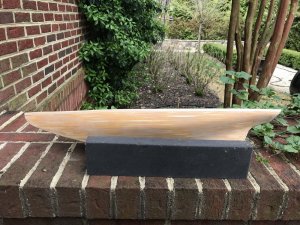 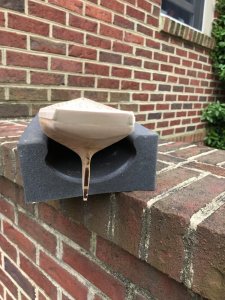 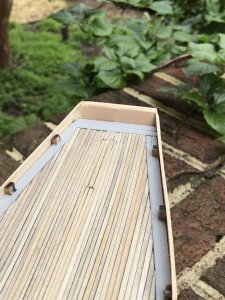 The transom was built up by using 3 glued 1/16” x 1/2” pieces and then shaping after glueing to false keel and planking ends. The final step will be to shape the top of the transom with a curve that will match the top rail flow. This approach was suggested in Bob Hunt’s practicum and is more straight forward than the kit plan approach. I must say that the plans while well detailed and drawn and poorly supported by the accompanying instruction manual. The manual is inconsistent and not well tied to the plans or presenting a logical building order. I think both are in need of an update to better align the sequencing and fix numerous cross reference errors.

I have added all the timbers to the bulwarks and my version of the knightshead timber. Also did a little more shaping of transom, more to do on that. Next up will start bow and stern rails and main rail. 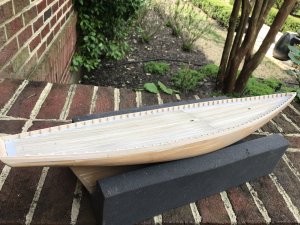 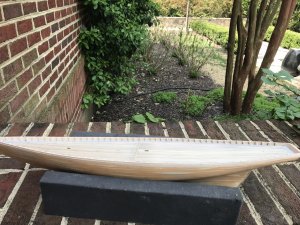 As I work on this kit the relatively small scale has me thinking ahead about rigging with or without sails. I had intended to put sails on but I am reconsidering. If anyone has built the MS Bluenose I would value any thoughts on this.

I have been working away on the Bluenose. My apologies that the pics included here do not show as much of the assembly process as I had intended, but I just was on a roll. As I mentioned in my last post the small scale of the kit makes a few details challenging. I did decide to add the approximately 100+ scuppers which took to drill and fine tune the holes in the inside and outside. After working with the Model Expo Stage Coach and Conestoga wagon kits I find the quality wood used for the laser cut parts to be too soft. It easily breaks or cracks and I not being heavy handed with them. I have had to rebuilt with other wood a few pieces already. I have finished painting the hull, waterline and main rail and protected with a coat of poly. Then went to work on deck structures for the fore deck including, hatch, skylight, companionway, Samson post, windlass and related gears and engine box. The Britannia pieces ranged from good quality and detail to poor quality. All pieces were blackened with a solution before attachment to wood structures. I have been following the suggested historical set up and colors of Bluenose as a working fishing ship vs racing schooner. 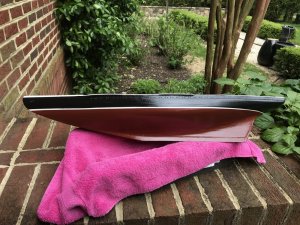 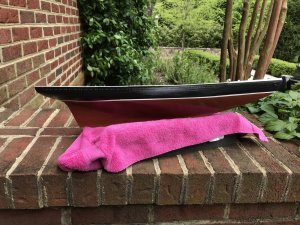 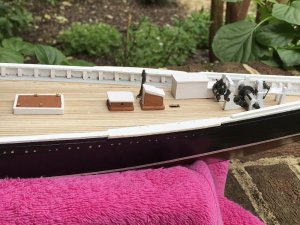 Progress continues on the Bluenose. I have completed the deck structures for the rest of the deck and installed. I also added the monkey rail, several eyelets and belaying pins. Most of the hull and rail painting is done so I added 2 coats of poly and one more to the deck. Next up will be rudder and then I’ll start on the masts, booms and gaffs. Definitely looking like a ship now. I do like the lines of the Bluenose. I can see why it’s a popular build. 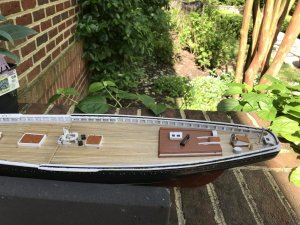 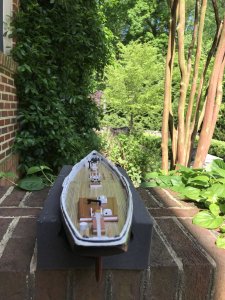 I have completed making up all the mast, boom and gaff work. I have decided not to add sails to my Bluenose. The sails are certainly a significant part of this ship but I don’t think they will look right on her. Therefore I did not make up the jumbo jib boom. I have assembled and attached the bowsprit as well. As you will see there are several black bands on the masts and related booms and gaffs. The kit calls for these to be brass and painted black however given the scale of this model that seemed over the top. I followed Bob Hunt’s suggestion here to use black construction paper. This worked very well and I believe creates the correct modeling impact as well. This is something I will use going forward on other ships as well.
So far I have put lines and blocks on the foremast, fore boom and fore gaff. Lots of standard and figure 8 seizing. I have taped all the long lines to keep them reasonably organized until I put them on the ship.
That’s it for now. 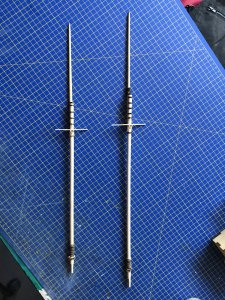 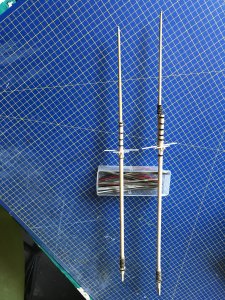 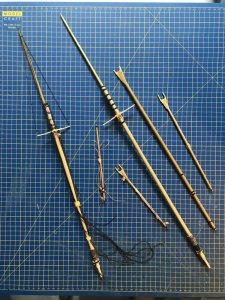 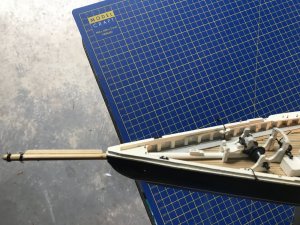 I have completed as much of the rigging as possible before putting the masts on to the ship. Both masts are now secured and next step will be securing shrouds to the deadeyes, then ratlines. I really dislike this phase and need to get better at it. I guess practice makes better. 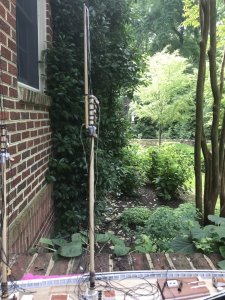 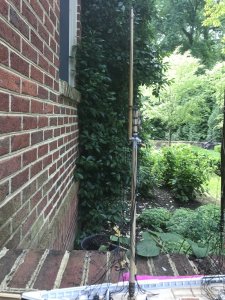 Over the past month I finished working on rigging the Bluenose, adding the anchors (I decided to show both anchors even though only one was actively hung during fishing use. The other would be stored on the deck in its two pieces.), the lights and the ship’s name and highlights. I decided to use the Canadian flag supplied with the kit even though it is not the historically accurate Canadian flag that existed during Bluenose’s days. I also fashioned a display base. This was an interesting project and I learned much from it. While I like the kit, unless you are an intermediate/experienced builder I would only recommend the Bluenose if you also have a good practicum to go along with it (I used Lauck’s practicum) as the plans while detailed leave much to be figured out re implementation.
As I look back over the past year’s projects ( I started building wooden ship models in June 2018) I have made good skills progression on things like fairing hulls, planking, rigging blocks, deck furniture and ratlines. I still need to get better at shrouds and dead eyes.
As a relatively new ship builder I highly recommend starting with simple ships with one mast and little rigging and then moving up to
multiple masted ships down the road. For me, doing this allowed me to build confidence and fix mistakes relatively easily. While the resulting ships may not have the “curb appeal” of the more famous ship models the skills development pays the dividends. 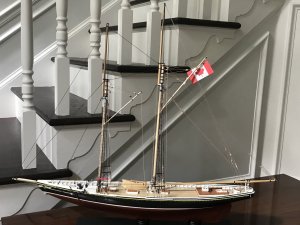 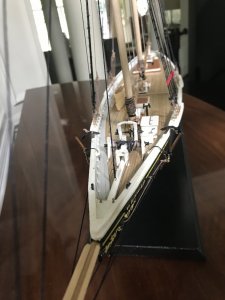 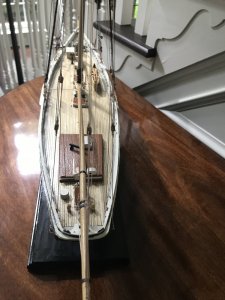 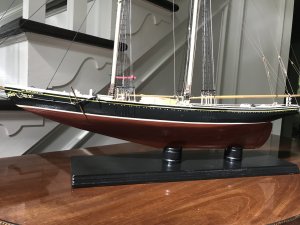