Rigging Period Ship Models: A Step-by-Step Guide to the Intricacies of Square-Rig
by Lennart Petersson 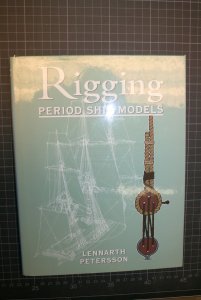 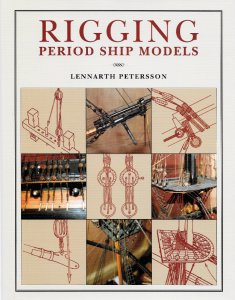 The rigging of period ship models is the most complex task which any modeller has to take on. An eighteenth-century man-on-war boasted mile upon mile of rigging, over 1,000 blocks and acres of canvas. To reduce this in scale and yet retain an accurate representation is an awesome undertaking. This new book is entirely devoted to making the modeller's job logical and straightforward. The author has, after studying in detail numerous eighteenth-century models now located in museums, drawn some 400 diagrams which show clearly how each separate item of rigging is fitted to the masts, yards and sails. Each drawing deals with only one particular aspect so allowing the reader to see it in isolation. Clear headings and concise captions add to the ease with which the book can be used. Whether a modelmaker needs to rig a whole ship or just requires information on one aspect, it is all here. The remarkable visual immediacy and clarity of this work makes it unique and no modeller of period ships will wish to be without it.
Petersson is a renowned draughtsman, modeler and has spent many years researching the intricacies of square rigged ships. Rigging Period Ship Models is the follow-up volume to his earlier publication, Rigging – Fore and Aft Craft, which focused on 18th century British Naval Cutters, the French Luggers and the American Schooner. 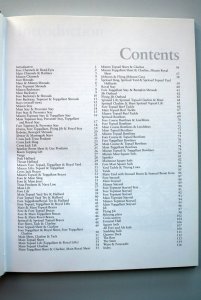 It is sufficed to say, a picture is worth a thousand words. Lennarth Petersson presents a beautifully complete illustrated manuscript detailing of the entire rigging layout for what was seen on a British Frigates of the 18th and 19th centuries in his book, Rigging Period Ship Models. He shows us fifty-four of the major components that make up a complete rig to these ships, presenting it in an incredibly easy to understand format. This book is a reference for any modeler regardless of skill level. Mr. Petersson set out to create a guide for model shipwrights which focuses solely on the rigging of these ships after realizing there was specific guides in print that show all aspects to how these ships were rigged; he did exactly what he set out to do! 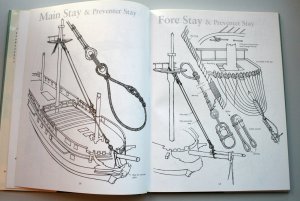 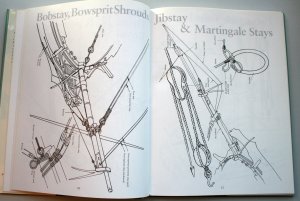 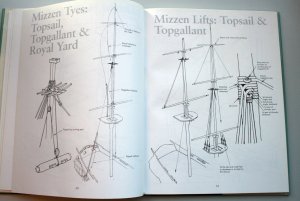 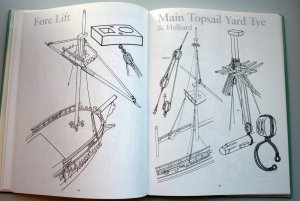 Rigging Period Ship Models is a 119-page illustrated compilation showing, with intricate detail, the complexity of rigging by using a period model of the British frigate Melampus as a baseline to show the rigging. After extensive research, Mr. Petersson chose the Melampus 36-gun frigate model to gather information for this book due to its accuracy. His premise to writing this book was to collectively bring as much information about traditional style square rigging into one book to serve as a referencing benefit to modelers.

Front to back, this book is filled with detailed illustrations showing all of the rigging components used on a British frigate similar to the Melampus. These drawing are presented in both 2D line drawings as well as very often in isometric formatting. Throughout the book, a close-up profile illustration of each type of rigging used on the ship is provided along with inset drawing of the rigging’s location on the ship. Each of these beautifully detailed line drawings are labeled to allow the reader to know names of each of the components used. 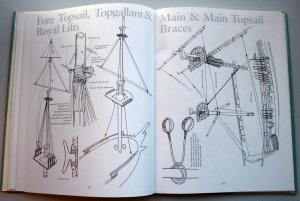 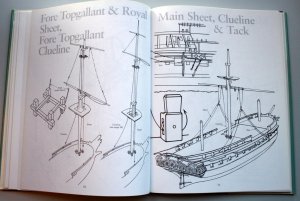 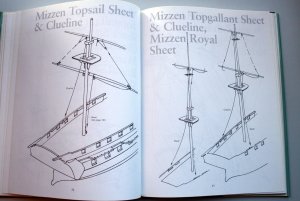 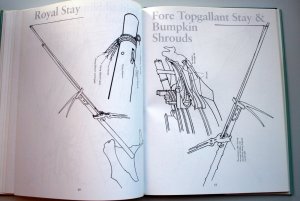 Nevertheless, where sunshine is, you can find also some shaddow. The book contains only one page of text, a short introduction of the Melampus, the model of this vessel was the basis of his drawings. So the showed rigging is based of the time around 1800, nevertheless the ship served from 1785 to 1805. so an exact dating of the shown rigging is not possible.
Also missing are appendices with tables of dimensions of the yards, blocks and lines, for this information the modeler will need other publications and resources.
Very helpfull are definitely the belaying plans in the book, which can help very much. 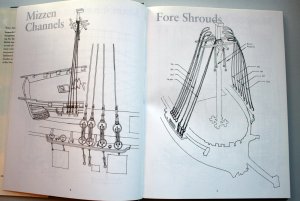 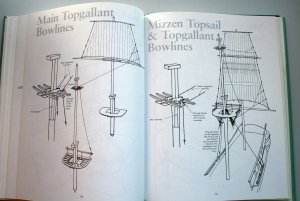 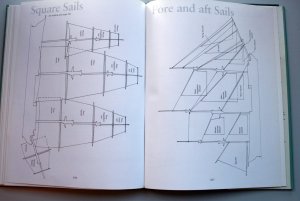 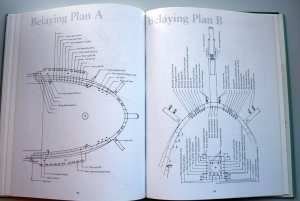 The book was under the Christmas tree this morning. I’ve spend the last couple of hours and two cups of coffee leaving through it. Fascinating.

I have the book" rigging period ship models " and I highly recommend it.

This and his other book are the best rigging books I have seen very easy to follow.

Copy of this book on the way to my house. There is no such thing as too many books. Thanks, Uwe!

This is on my Kindle great book

Also have the Kindle addition.
So glad I got this and his follow up Rigging Period Fore and Aft Craft. They both should be on the list of anyone starting out. Huge time saver!
Nice going Uwe!

Not a fan of ebooks.
Had some egames once but they disappeared .

lol,
I thought I was on my build log web page when I posted this

I’m in the same place with my Rattlesnake build. Lots and lots to learn. I also have yet to buy a book. I have gotten on Pinterest and found many many posts and pictures that have been very helpful. I also have checked out build logs on this site for my exact ship. Fantastic help that you can Use. Good luck

I just received my book and enjoyed going thru all the diagrams of rigging.

Overall a good book, but lack of text to explain things was a big disappointment.

Kkonrath said:
I just received my book and enjoyed going thru all the diagrams of rigging.

Overall a good book, but lack of text to explain things was a big disappointment.
Click to expand...

Therefore we are posting these book reviews with a detailed possibilty to have a "Look Inside".

The information you are missing can not be explained in such a format like this this book.
For such information you have to look into other books about seamanship and handling, like

Book review - "The Elements and Practice of Rigging And Seamanship" 1794, by David Steel (and others)

Some years ago our member @DaveC found this already on an other web-page (see herefore the post from 2016: https://www.shipsofscale.com/sosforums/index.php?threads/the-elements-and-practice-of-rigging-and-seamanship.995/ ). In order to archivate this in this area as a reference I make this...
shipsofscale.com

Book review - SEAMANSHIP IN THE AGE OF SAIL: An Account of the Shiphandling of the Sailing Man-of-War 1600-1860" by John Harland

if you take a look at these books, you will easily see, that this subject is so wide, that it can not be completely included in a book like the Petersson books

Thank you for the other references.
J

Hi new member here. I came across this old thread, Just wondering if there is much difference between the two editions of Rigging Period Ship Models shown in the original post above? Thanks in advance!
Last edited: Jan 7, 2022

Same book however he does have two books , one is for square rigging, the other for sloops etc called

Rigging Period Fore-and-Aft-Craft, both are reviewed on SOS and definitely worth obtaining.

paulv1958 said:
Same book however he does have two books , one is for square rigging, the other for sloops etc called

Rigging Period Fore-and-Aft-Craft, both are reviewed on SOS and definitely worth obtaining.
Click to expand...

Thanks for the reply! Yes I’m aware of the two different books, but was just wondering if the newer edition of Rigging Period Ship Models had any updates in it. I can get the previous edition for a much cheaper price. Thanks again!!
You must log in or register to reply here.
Share:
Facebook Twitter Reddit Pinterest Tumblr Email Share Link
Top