The fun level picks up as you get lower in the bow planking!

I hate it when it does that.

need to fine a trick to blacked the seams between the planks. Just before the final sanding.


On a real ship the deck needed to be watertight. Once the planks were laid in position on the deck the gaps between the planks were sealed by a process called caulking. Caulking involved forcing a quantity of oakum (a rough fiber), or old untwisted ropes, into the gaps where the planks are joined. After the oakum was driven into the gaps, hot melted pitch or tar was poured into the groove to stop the water rotting the oakum. Once the tar had set and any residue removed, a thin black line was showing between the deck planks.

To simulate the caulking of the deck on a model there are a number of approaches that can be applied. As with many things in model shipbuilding, there is no one right or wrong way—just different ways to achieve the same goal. It comes down to your own personal preference.

A couple of approaches are presented below:

1. Mark one edge of each deck plank with a black marker pen. Run a trial with a few planks to ensure that the marker pen does not weep into the timber or that the clear polyurethane varnish that you will be using to finish the deck does not dissolve the black color when it is later applied.

2. Apply a dark soft lead pencil along the edge and end of bundled planks. This method is presented in more detail later.

3. The false deck can be painted black before the deck planks are applied and a slight gap left between them.

4. Leave a slight gap between the deck planks which is later filled with black sewing thread which is first pulled through rigging wax

The suggested method to simulate caulking


The following method to simulate the caulking on a model is suggested. Gather the deck planks in your kit into bundles of 6 to 8. Use bull dog clips to hold them aligned together—Photo 8.

Then using a soft lead pencil rub the pencil across the edges of the bundled planks along their length. Repeat for the other side of the planks. Repeat this for all the bundles of deck planks you need to cover the false deck—Photo 9.

When the deck planks are laid over the false deck the thin black line to achieved to simulate the caulking is very effective. This approach also has the advantages of not weeping into the deck plank and is not affected by clear polyurethane varnish.

Not sure how easy it will be to simulate the caulking after you have planked the deck, but here is the link: https://www.modelerscentral.com/blog/how-to-do-deck-planking-on-wooden-model-ships/

thank you for the link...I saw somewhere where ink and glue was used, after it was dry ,then scraped off, leaving the joints black.

Hello I have started the starboard planking.
And I received a new tool last Thursday..... 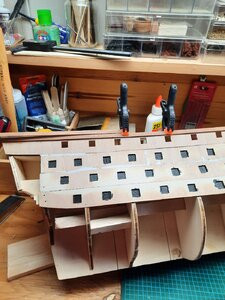 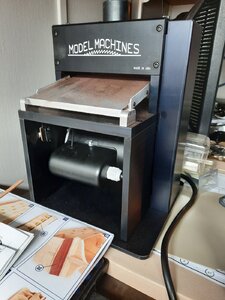 What’s it do, Smelly?

hehehe its a brynes sander

I told the Admiral I don’t know what I’d use it for but it would sure be nice to have. She said that $400 would buy me a ticket to see our daughter. I guess I’ll have to wait.

ya the admiral is a hard sell sometimes... I need a small lathe like the proxon db 250 just simple basic stuff, maybe with an extension to do longer pieces 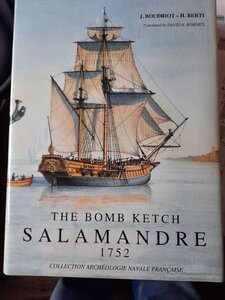 smelly said:
This came in the mail from Ancre took 3 weeks to get here View attachment 180371
Click to expand...

Very cool. Someone at work just handed me this. She got it for free at a garage sale. 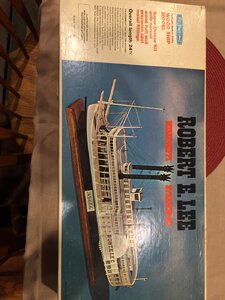 Never heard of Scientific company before.

Vfordyce said:
Very cool. Someone at work just handed me this. She got it for free at a garage sale.
Click to expand...

Now that is a BLUFF bow!!

Hi Smelly,
I saw your earlier post about wanting a small lathe. That a great idea. I'm on my second build which is the HMS Fly I see where I'll need to taper all the mast and spars and yards. Right now about the only thing I can taper evenly is a pencil ands that's using a sharpener. I hope there not too expensive.
You must log in or register to reply here.
Share:
Facebook Twitter Reddit Pinterest Tumblr Email Share Link
Top