I started this build some time in May and currently I'm in the process of shaping yards. I'll be posting pictures and comment starting with the very beginning and hopefully I'll catch up to the build's current state.

This is the model of Russian tender named "Avos". As far as I know this word only exists in Russian language and describes a world view when you don't know the outcome but hope for the best, citing Wikipedia:

The Russian avos' (Russian: русское авось) describes a philosophy of behavior, or attitude, of a person who ignores possible problems or hassles and, at the same time, expects or hopes for no negative results or consequences. It is an attitude that treats life as unpredictable and holds that the best one can do is count on luck.

This ship is well know in Russia because of "Juno and Avos" rock opera that was performed for the first time in 1981. It tells the story of a tragic love between Russian explorer Nikolai Rezanov and a daughter of the governor of Spanish California.

"Avos" was a tender built in Novoarkhangelsk (present Sitka, Alaska) in Russian America in 1806. She was manned by a crew of 12 and was a part of an expedition to California headed by explorer Nikolai Rezanov that consisted of two ships, brigantine "Juno" and tender "Avos".

They arrived in California in the same year, to get provisioning for starving Russian settlements in Alaska. During his stay in San Francisco, Rezanov met a 15-year old daughter of the Spanish governor Maria de la Concepcion Arguello. Maria fell in love with Rezanov and they got engaged. Unfortunately they could not get married because she was a Catholic and he belonged to the Eastern Orthodox Church. Rezanov had to obtain the Russian Emperor's permission to marry Maria. Promptly, he sailed back to Alaska and then to Okhotsk. From there he had to cross all of Russia east to west on horseback to get to St Petersburg. During this perilous trip he fell ill and died in Krasnoyarsk in 1807 at the age of 43. Maria did not believe the news of his death until 1842 when Sir George Simpson gave her a detailed account of Rezanov's death. She took a vow of silence and lived in a monastery in Monterey, California until her death in 1857.


.......
1. As always the first step is setting up the "skeleton" framework for planks. This kit is a plank-on-bulkhead type with two layers of planks. The interesting detail in this kit is that
the whole frame is split horizontally by an HDF plate into two separate parts - top and bottom. First all bottom bulkhead and the center keel are installed into the HDF plate (which has asymetric notches so you'd never be able to mix up left and right bulkheads): 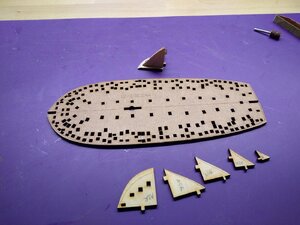 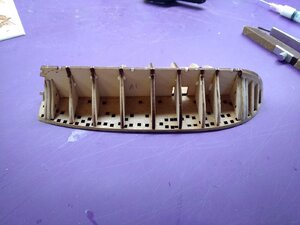 2. After all bulkheads were installed, I planked the lower portion of the hull: 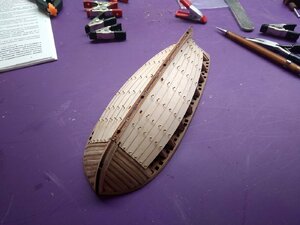 3. Next the upper section of the center keel need to be assembled along with the stern: 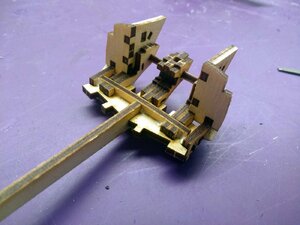 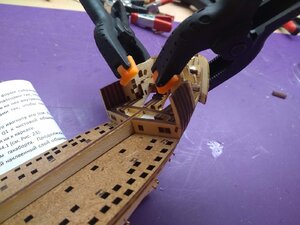 4. What I found really interesting about this build was that counter and taffrail were not glued to the stern. They were supposed to be shaped and assembled separately: 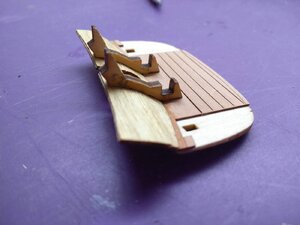 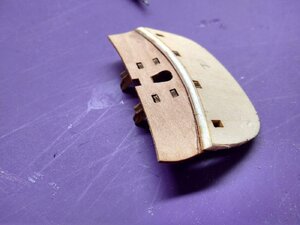 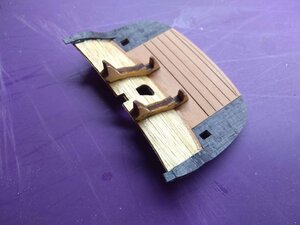 Hi Egor. I am very happy to see your build log. I an currently building the Falkonet Longboat (20-oar version in Pear Wood and an awesome kit) and have the Leudo waiting, so it is great to see build logs on these superb Russian models.

Overal the counter and taffrail turned out to be the most difficult parts of the whole build. The first layer of counter split when I bent it, so I had to carefully reglue the sheet...

5. After that I went back to building up the bulkheads for the section of the hull above the HDF plate: 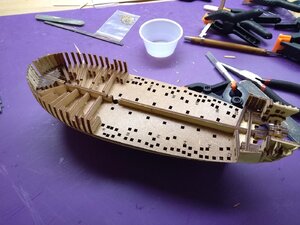 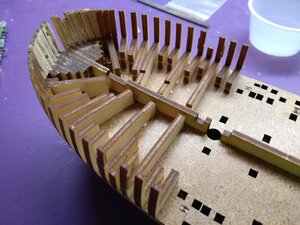 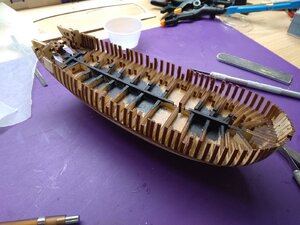 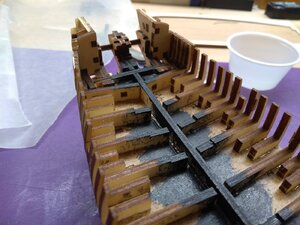 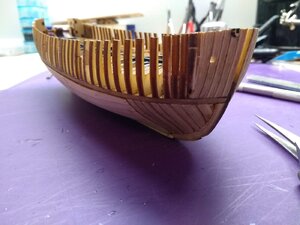 6. Once all bulkheads were installed (there were a lot of them!) the deck was glued. What I found interesting was that there was no subdeck on this model. The deck is a single sheet of maple veneer. The inner bulwark installation was a breeze thanks to the guiding pins that were inserted into holes for gun tackles: 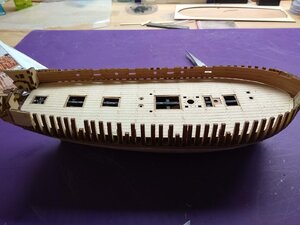 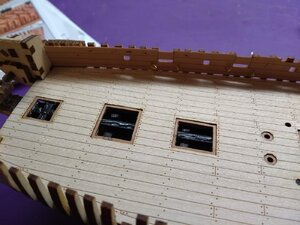 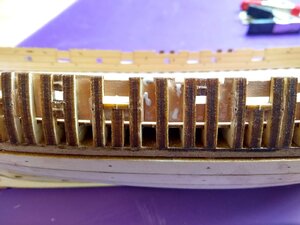 7. After the deck and the inner bulwarks were installed the hull was faired and planking began: 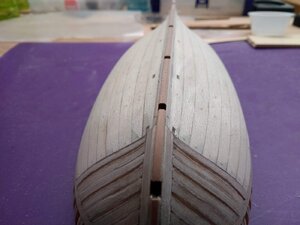 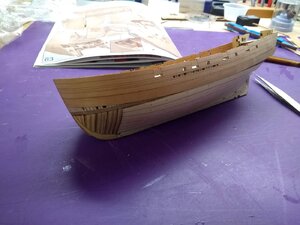 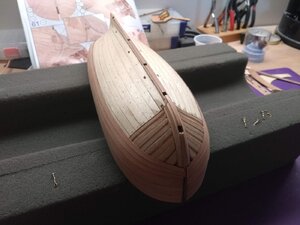 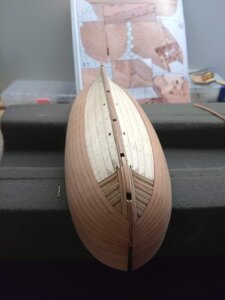 Thanks Heinrich,
I forgot to mention, I always use hot iron technique for planking final layer on MK kits. It is a lot easier, doesn't require soaking and planks always lay nicely!

I do exactly the same!
D

Great looking build so far Egor. Are those planks pear and are they pre-cut?

Nice to see someone building the same model like me. Very nice result! That is a great motivation for me to start my own build log soon.

Klamaha said:
Nice to see someone building the same model like me. Very nice result! That is a great motivation for me to start my own build log soon.
Click to expand...

This would be very good and interesting to see

DonRobinson said:
Great looking build so far Egor. Are those planks pear and are they pre-cut?
Click to expand...

Don,
I forgot to mention that I'm building the pearwood version of the kit so all final layer planks are pearwood (except for the deck, which is maple). And all planks (including the first layer) are pre-cut.

Uwek said:
It is looking like a very accurate kit - all the planks are fitting well - It is looking very good
Click to expand...

I have one question or better would like to get a confirmation for my thoughts:
we can see, that the first planking is ending behind some temporary frames, and the second planking is going over them to close the hull. (marked with red arrows) 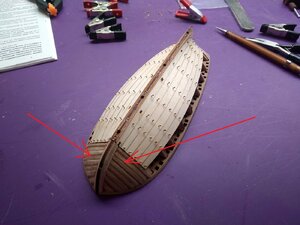 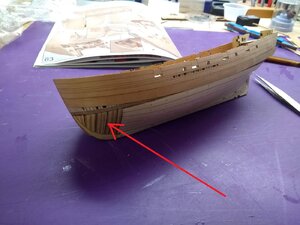 Often modelers have problems at the bow area with the forming of the first planking to get a correct form of the bow.
I guess, this way with the framing is only for helping and assisting the modelers to get the correct shape of the bow.....
Am I correct?
A very good idea (if I am correct with my guess)

and BTW: the pear is looking very good - good decision to use this kind of timber

Uwe,
yes, that is correct. The first layer of planks is plywood and has no curvature at all and ends at the bow bulkheads. There were plywood filler blocks that were needed to be beveled and inserted between bulkheads in the bow. This provided support for the final plank layer.

I agree about pearwood. It is very nice looking wood. Other option was anigre.
T

Hi Egor, building Tender Avos also, and thanks again for sending me the new planks I needed, stern area gave me a little trouble, looks like your a little ahead of me though ,nice to see your build.

@craftysailor sorry for off topics

@Tom V It is good to know you are building the same model from the same kit. We would love to see your build log as well! Is it possible? It is not difficult at all, and doesn't require starting from the beginning. How does this sound to you? Feasible?

8. The interesting thing about this kit is that once you plank half of the hull you need to stop and do the transom. I would say that the stern area was the most difficult part of this whole build. There were a lot of curves that needed to be aligned symmetrically and nicely. First the planks in the stern needed to be sanded flush with the transom and the transom back piece was glued: 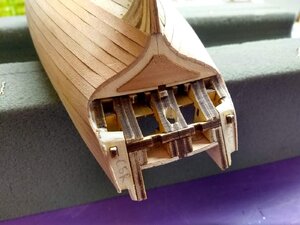 Next the transom pieces were roughly shaped and installed: 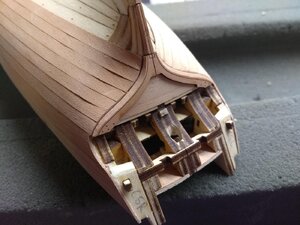 Finally the rest of the transom parts were installed and planking continued: 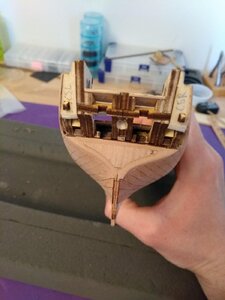 Planking was finally done, all that was left was sanding: 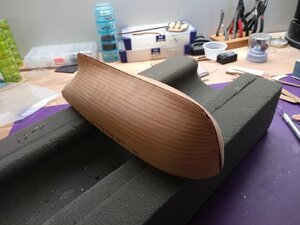 The hull was then carefully sanded and a couple coats of wipe-on-poly was applied: 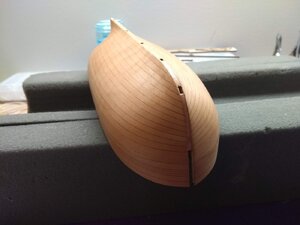 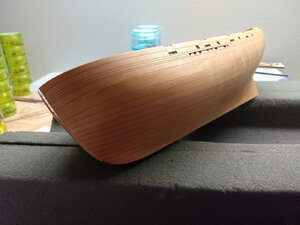 Tom V said:
Hi Egor, building Tender Avos also, and thanks again for sending me the new planks I needed, stern area gave me a little trouble, looks like your a little ahead of me though ,nice to see your build.
Click to expand...

Hi Tom, I'm glad that planks worked out for you!

Now that the planking has been completed I can honestly say that this is some of the best planking I have seen.

Heinrich said:
Now that the planking has been completed I can honestly say that this is some of the best planking I have seen.
Click to expand...