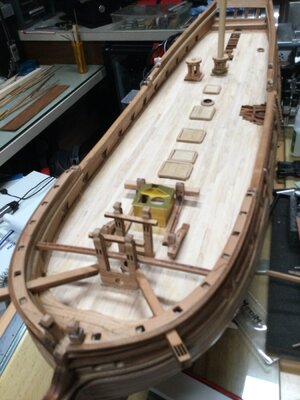 Here are the parts dry-fitted, yet unpainted; the boiler still not finished. Have not started on partitioning in cabins and I also need to start building gun carriages and blackening guns.
S

Wow! Is all of that included in the kit or are there some scratch built items as well? Very nice work in any case!

The kit includes everything. I didn't like the grates that came with the kit-too fragile- so I ordered some others.

Update on HMS Enterprise build
Happy New Year Everybody !!
The foredeck bulwarks were too short and needed some reconstructive surgery. This is after adding 1/4" height to the bulwarks and working on the bow. 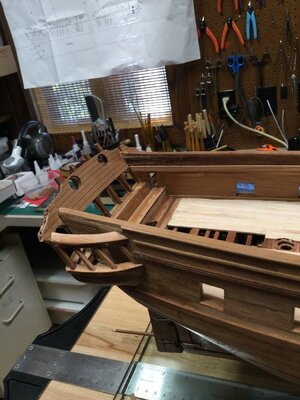 I spent a LOT of hours on New Years Eve working on the stern and the structure of the quarter-deck galleries. Still have a lot of work to do. Installing the windows will be a job !!! At least some progress.
Happy New year to all...Be safe.
Alex R

Alex, was the surgery requirement a kit design issue or was it builder error? Just wondering if it is something I need to prepare for?

This is a MEA CULPA and confession re: my build of HMS Enterprise.

The mistake was both a kit (plans and instructions-poor and in Chinese !) error and builder error(s):

1) The lines that correspond to the deck levels are very poorly marked on the plans, and not at all explained in the instructions. The biggest problem I have had with the kit relates to these lines and defining the deck levels. The lines in the plans indicate the deck level, NOT the level of the deck clamp: you have to add the height of the deck beams and the thickness of the planks and draw a new level corresponding to this line below the line marked on the plant to install the deck clamp upon which the beams lie. If I had to do it over again, I would mark the level of the deck clamp on the inner aspect of each frame as I position the frame on the keel structure. It is a LOT EASIER to mark a line at each frame level as they are positioned on the keel as they are placed rather than to mark a line from the outside of the frame/rib skeleton and transferring it it to the inside of the frame after all the frames are in. Remember that the deck beam line is referenced to the outside of the frame, but the deck clamp attaches on the inner face of each frame. The level changes on each frame (since the deck is not flat, but has a slope at the bow and at the stern) and is always in reference to the bottom of the keel. Unfortunately this is not explained AT ALL in the instructions and the different plans are not exact!! You need to do this for the main deck and for also for the foredeck and the quarterdeck. From a shipwright point of view, the EXACT positioning of the deck clamp on each frame is as important as keeping the keel flat on the Z axis as well as the X axis.

2) As far as the height of the bulwarks, the top futtocks of each frame are not all even, so I would also mark a line to indicate the top of each frame (where to cut it.) I cut mine too short...so I decided to fix it later...Sorry about the long winded explanation.

3) Another very important build point concerns the positioning of the mast partners (mast rest) on the keel) in relation to the deck structure above... You must place beam structure, carlings etc., for each mast and build the deck structure out and back from each mast location. (This IS indicated in the instructions, and is SUPER IMPORTANT-and it might have been explained in Chinese, but I chose to ignore it to my detriment. I started framing the main deck from the bow and worked my way towards the stern. As I arrived at the location of the mainmast, I realized that the position was off by 4.5 mm.....I would have had to undo all the deck beam work so I decided to place the mainmast where it was. This means my model will have the main mast aback about 5 mm from where it should be. As you work back, the error multiplies, so in order to keep the mizzen mast in place I had to trim down the length of the lodging knees. This means that the size an placement of some of the hatches on the deck. is not exact.

I should probably re-name the vessel HMS Pandemic instead of HMS Enterprise, since it is not quite HMS Enterprise as designed but a similar ship, built by an incompetent shipwright (maybe the same one as the Vasa ?) It would probably be a bad sailing ship and sink in the first storm with great loss of life !!!
Anyway, I've had a lot of fun, and LEARNED A LOT from this build-not yet finished by a long shot. (I knew it would be learning experience......) I hope that each build is better- I learn more, although I have a way of making new mistakes
I'm sure I'm not the only one on SOS with a story like this...Comments are invited....

Very familiar story to me Alex, and one that I tend to even repeat on subsequent models. I think the only way around making errors is not to build at all... although there does seem to be a new crop of models that design in almost foolproof methods to ensure accuracy but then I think you wouldn’t be learning as much as the kits do the thinking for you.... I have always relied on having good plans rather than following instructions but invariably when I get in trouble I find myself looking for help in the instructions..... that is definitely one of the major challenges in the kit building aspect - deciphering the instructions whether they are Italian, English or Chinese!!
I appreciate the heads up and openness about your build - nothing as effective as experience in the learning process! There are so many build logs where you see great lumps of progress but none of the frustration of how they got there, taking the time to teach as well as build is a such a blessing for all of us - Thank you for taking the time to share and be a mentor of sorts, your willingness to contribute is what makes belonging to a shared forum so effective and synergistic, you have a great model emerging from your efforts- looking forward to learning along with you as you progress.

Hi Alex,
thats the same issue I had with my build. I had difficulty determining the deck height placement.

I measured off the plans, but that was not totally accurate. I had to remove timber and re-glue a few times by trial and error.

Perhaps @CAFmodel can re-issue updated plans with the corrections made addressing the points mentioned above? 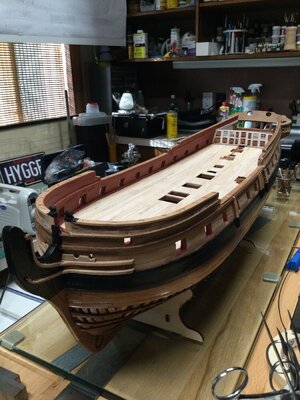 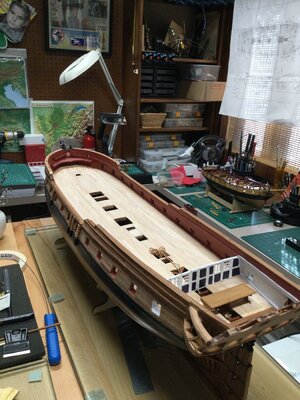 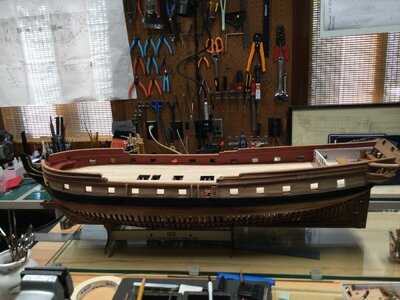