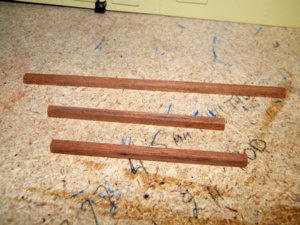 So its onwards and upwards to the frame work that supports the bridge awning, I cut some wood to size
for the support beams, two of each, I had left the beams a little bit longer than needed, 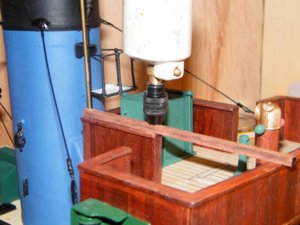 I started on the inside beams first, drilled a hole through the back end and then down through into the railings,
I then placed a piece of brass rod into the hole to hold the beam and then drilled the second hole, 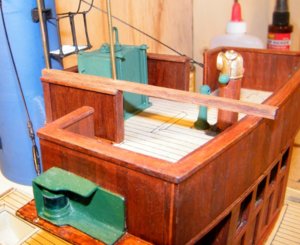 put a second piece of rod into the hole, then marked and drilled the third hole on the bridge front, on the plans
they show these support poles just fixed inside the railings straight onto the deck, i decided to put them into the
railings for more strength, 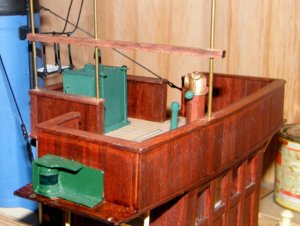 The first three poles just sitting in place, and I am working out at what height I will fix them, 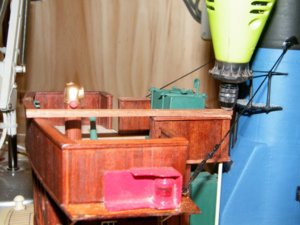 I then used the same beam to drill the holes on the other side which makes sure they are spaced exactly the same,
When drilling the holes I used two sizes of brill bit, a pilot size bit and then the exact size bit, 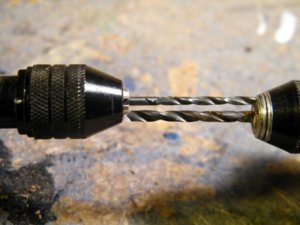 I made sure that both bits were the same length, so that when I cut the brass rod to size all the holes that the
rod went into were the same depth, 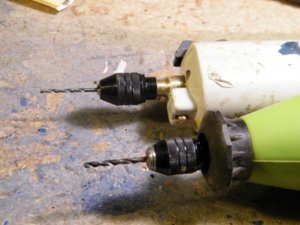 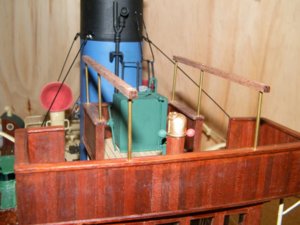 The two middle supports in place, they look a bit crooked but it is just the camera angle, 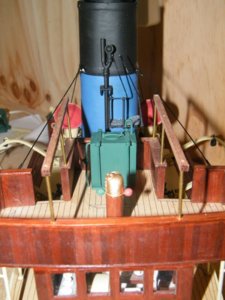 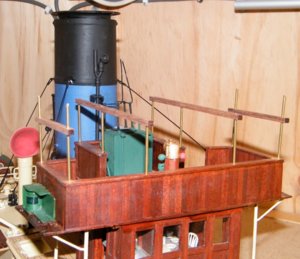 I wanted to have some run off on the awning so I placed the center supports at 70mm and the outside ones
at 65mm, which equates to 7foot in the centre and 6foot 6inches on the outer ones, 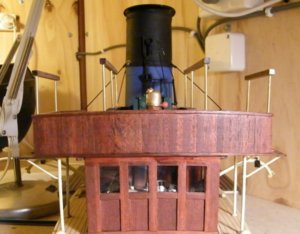 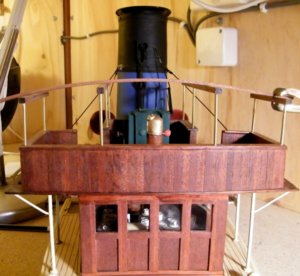 This shows the round up of the awing, I will be using some stainless steel rod for the cross supports, 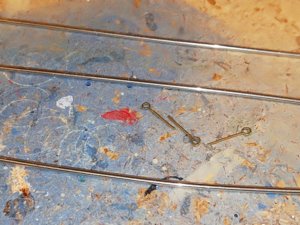 These are the stainless rods and brass eye bolts that i will use for the cross supports,

The rod at the front has been bent to the round up needed to sit on the beams with no stress, 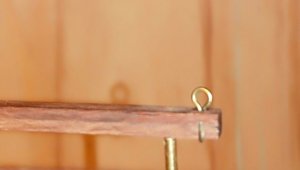 I drilled a small hole, .7mm through the beam and placed the eye bolt through it and then bent the end back
up around the side of the beam, 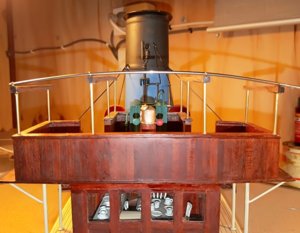 The first cross support in place, this one took a little bit of maneuvering to get it in place, as it not only had
round up but also it had to be bent forwards as well to follow the curve of the bridge front, 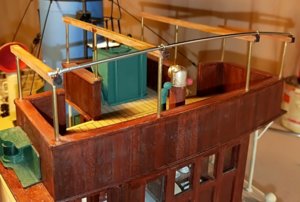 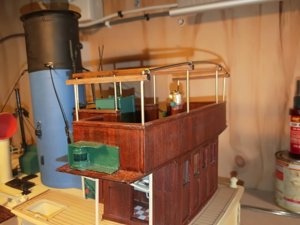 side view of the front support, here again it looks like the far support pole is out of alignment but it isn't, 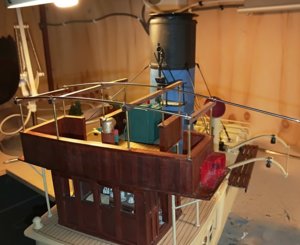 attaching the second awing support, after it is fixed i will cut it to the right sight size with a cut off disc,
Not a Four Inch one, , 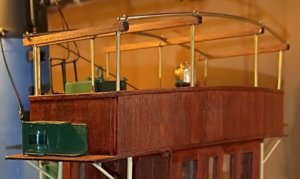 The first two supports in place, there is another one to go in between these two and two smaller ones at the
back where the frame work is narrower, 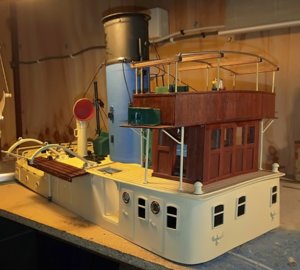 an overall view, I will have to decide whether to leave the suppot poles and cross supports as brass and stainless
steel or paint them, will have to think about it, also whether to attach the actual awing or not,

Getting there John, have you already prepared arrangements to bring her under a classification bureau like Lloyds or DNV

With having built up the railings around the water tank there was no way to get from the bridge to the funnel
platform so I built a ladder to go from the deck up to the platform, I cut two pieces of wood to size, making sure
they were long enough to get the ladder out of,

Then I glued each ladder side to the other for one inch at each end to hold them secure while I drilled the
ladder rung holes, 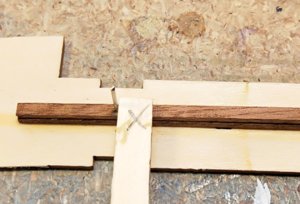 After the glue had dried I then drilled a 1mm hole through both pieces, I had made up a spacer for the ladder rungs,
I put a 1mm piece of rod into the first hole put the spacer against it and drilled the second hole, 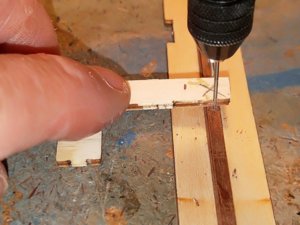 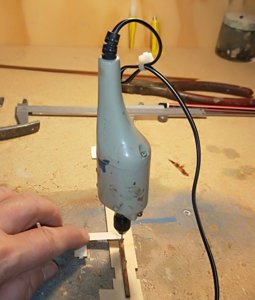 Just in case you thought That I had three hands this is how I took the pic, 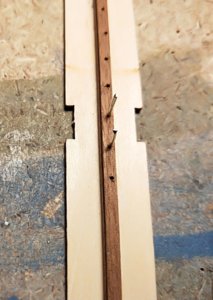 The last hole been drilled, 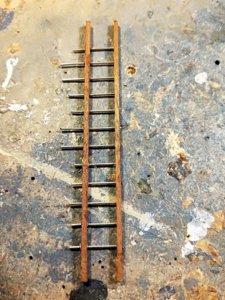 Then after gluing the rods to one side I made another spacer for the width of the ladder
sides, and then glued them in place, 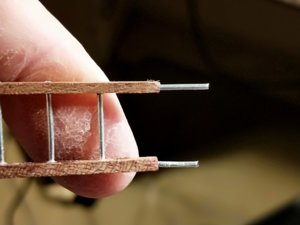 the fiddly bit was drilling the holes up into the ladder sides for the pins to locate into the deck, I have done my
usual thing and cut one pin shorter so I can drill one hole put the long pin in it and mark where the other side
will go, 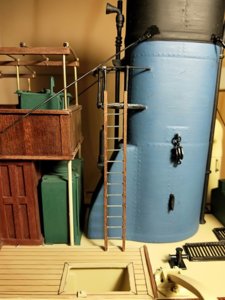 The ladder in where it will be positioned, I have to trim the top down a bit, and make
and fit two hooks that will secure it to the funnel platform, 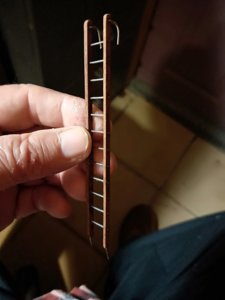 The completed ladder with hooks fitted, 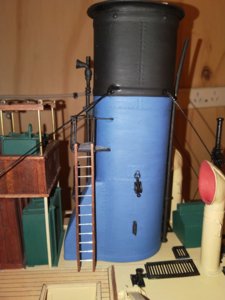