Francis Jonet said:
These photographs date from February 2011.
I am only now finishing the hull fittings, in a short time I will pass to the rigging.
Click to expand...

Great build, Fransis! We would love to see photos of your deck fittings, if possible!

Jimsky said:
Great build, Fransis! We would love to see photos of your deck fittings, if possible!
Click to expand...

I (We) will show them also in the future....but step by step

Many thanks both of you Francis and Uwe!!

Time is running .... here comes the next group of Building log excerpts 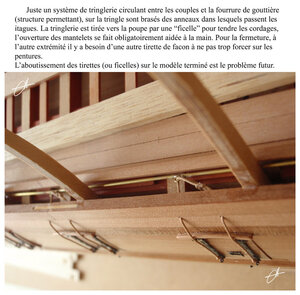 Just a linkage system circulating between the couples and the gutter fur (structure permitting), on the rod are brazed rings in which passes itagues. The linkage is pulled to the stern by a" "string" "to stretch the rope, the opening of the mantles is necessarily assisted by hand. For the closure, at the other end there is need another zipper so as not to force too hard on the hinges.
The completion of the drawbars (or strings) on the completed model is the future problem. 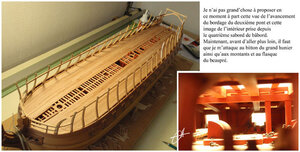 The laying of the planks of the second bridge is completed. Now there is "I do not have much to offer at this time except for this view of the progress of the planking of the second bridge and this image of the interior taken from the fourth port port.
Now, before going any further, I must attack the baby of the big topsail and the amounts and the fiasco of the bowsprit. "
has a lot of sanding and scraping to level all that up. 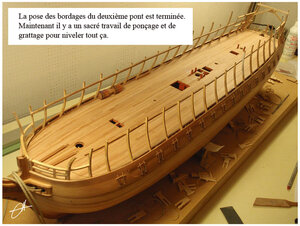 The laying of the planks of the second bridge is completed. Now there is a lot of sanding and scraping to level all that up. 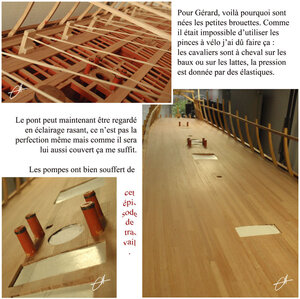 For Gérard (Delacroix), that's why the little wheelbarrows were born." Since it was impossible to use the bicycle clamps I had to do that: the riders are riding on the leases or on the slats, the pressure is given by rubberbands .
The bridge can now be seen in low lighting, it is not perfection itself but as it will be covered too it is enough for me.
The pumps have suffered a lot from this episode of work. 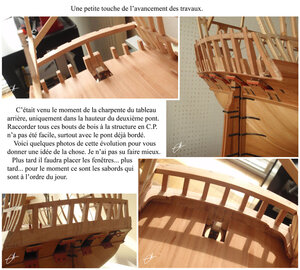 A little touch of the progress of the works.
It was time for the transom structure, only in the height of the second deck. Connecting all these pieces of wood to the C.P. structure was not easy, especially with the deck already lined. Here are some pictures of this evolution to give you an idea of the thing. I couldn't do better. Later, the windows will have to be placed ... later ... for the moment, the ports are on the agenda. 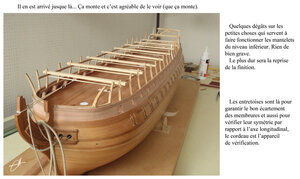 It has come so far ... It goes up and it's nice to see it (it goes up),
Some damage on the little things that are used to operate the mantles of the lower level, Nothing too serious.
The hardest part will be the resumption of the finish.
The spacers are there to guarantee the correct spacing of the members and also to check their symmetry with respect to the longitudinal axis, the line is the verification device. 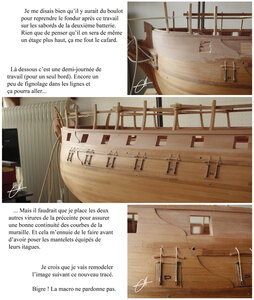 I told myself that there would be work to resume the melt after this work on the ports of the second battery. Just to think that it will be the same a story higher, I don't care.
Over there it's half a day of work (for one edge). One again
little tweaking in the lines and it will be fine ...
... But I would have to place the other two strakes of the pre-wall to ensure good continuity of the curves of the wall. And it bothers me to do this before having put down the mantles equipped with their itagues.
I believe that I will reshape the image following this new layout.
Bigre! The macro does not forgive.

The lining of the second battery is finished, almost finished.
There remains the creation of the porthole rebates and the painting.
The forty-one leases are made. Above the first set up for height verification.
The reservation that eats the second rain gutter is made to receive the
wood that will make the porthole rebate.