Hi to all. Keep safe in theses difficult times.
As promised the first images of the build log. This is my first attempt at building a model of an historic ship. My wife bought me the kit after I had discussed with her about starting a new hobby and venturing into the world of ships. My build of this ship will go more or less with the instructions from the manufacturer and not applying too much detail according to the ships original build. At present, and as this is my first model, it is important for me not to achieve perfection, although I will attempt to do the job properly, but to sucessfully complete the model and display it with pride in my "cave".
The kit is from Occre, scale 1:54. The materials are of a high quality and, as far as I can tell, the garn for the rigging and the sails are more or less true to the original, in size and in colour. The instructions are sub-optimal, the drawings supplied in 1:1 are excellent, although a view onto the bow, the stern and views onto the port and starboard sides are not included. For me as a person with a technical background these views are essential for the build and an email to Occre on this subject bore no fruit. The photos included with the kit detail each step, but still a lot of gestimate involved. I wonder if anybody out there has detailed drawings of the bow, stern, etc?
I started the build by checking the kit for integrity and completeness against the parts list supplied and numbering each part from the drawings.
The first step of the build involved the keel and struts. These were bonded together using white glue. For the deck planking I used contact adhesive.

Joining the two halves of the false keel. 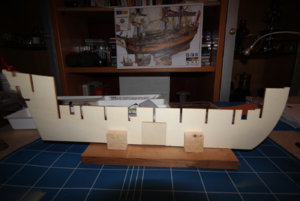 I knocked up an assembly fixture out of old pieces of wood I had lying around. My ultimate goal is displayed as a poster in the background! 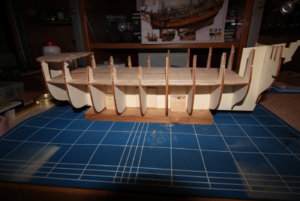 The struts in position. I mounted the decks before the glue dried to ensure the correct positon of 90° of each strut relative to the false keel. 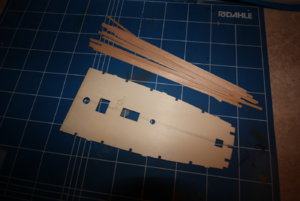 The decks, apart from the bow deck were supplied in halves. I marked the positon of the 1st plank on the deck, thus ensuring that a plank rang along the middle of each deck. 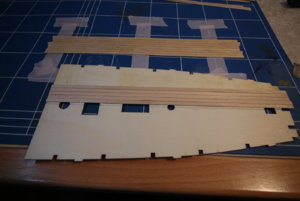 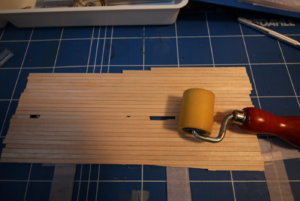 I used a wallpaper roller with a rubber roll to apply sufficient pressure to the planks to ensure a good bond to the deck beneath. After completion of the deck planking, having used a pencil with soft graphite beforehand to mark the edges of the planks, simulating the teer sealent, I marked the planks using a pencil to simulate the joints of the planks and the nails, using Marquardt's book for the position of the planks. The manufacturer stated every second plank was butted, Marquardt states every third plank butted. 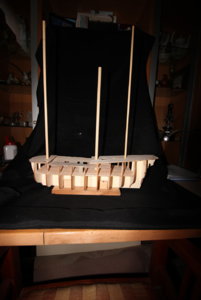 Provisional mounting of all decks to check the position of the holes in the decks and the keel for hole alignment to accomodate the masts and to check the angles of the masts relative to the decks. All was well. 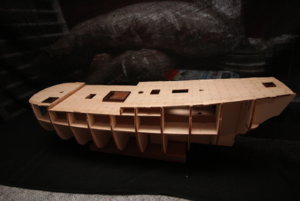 The decks were glued on to the hull using white glue and the hold cover built and the frames for access to the decks below and for the rudder mounted. After assembly of the decks, I noticed that the lower deck had not needed to be planked at all as it cannot be seen when the model is completed! 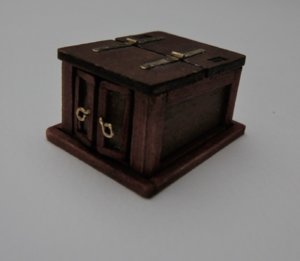 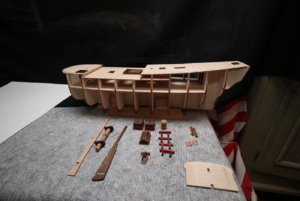 The next step would be to install the 1st planking. But, as this was my first kit and knowing that a successful planking was the essence of good modelling, I left this step on the back burner and plumbed for some of the deck accessories shown above. I knew, though, that I had to start planking sometime, and after consulting with this site and other sources I dived into the deep end and started..... 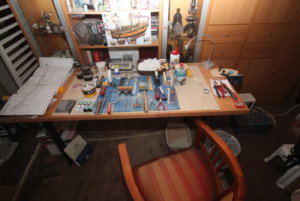 This a view of the tools and materials I am using to build the ship. Not shown are a small hand drill, pillar drill and a vertical disc sander. 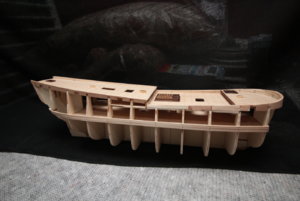 After carefully fairing the struts, I mounted the first planks, 5 x 2 mm, and fixed with white glue and nails. I started at the lower deck and worked upwards to the top and then downwards to the keel, alternating each plank on each side of the hull to ensure equal "strain" on the hull itself.
I immersed all the planks in warm water for about two hours and then fixed them temporarily with clamps and nails to the hull and let them dry in situ before gluing them to the struts. 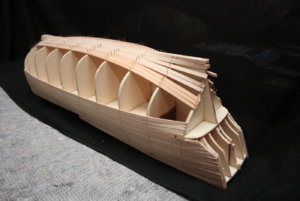 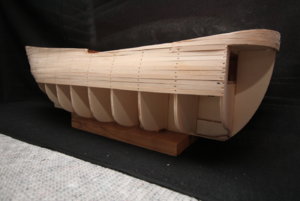 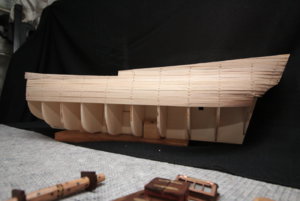 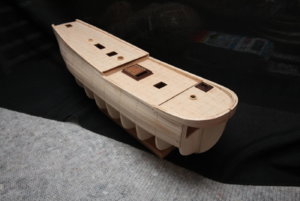 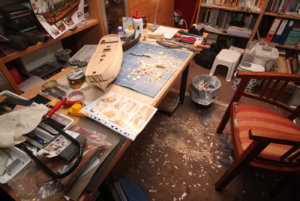 This what my work place looked like when I had finished shaping the bow!! The bow is balsa wood and never again. It's too soft and one can easily remove too much. The next time I will use normal wood for the bow, as is the case for the stern. 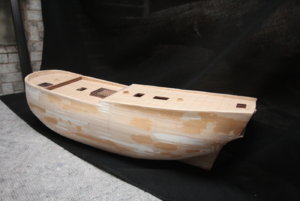 I used a wood filler to fill in the hollows and gaps. A lot of sanding and testing the shape of the hull with strips followed and my work place became dustier and dustier. So I went outdoors onto the terrace, enjoyed the warm weather and carried on sanding there. I had to be very strict on myself here, because I knew that any mistakes, i.e. not sanding properly or leaving divots or hollows in the hull would show up through the second planking. This part of the build took about 2 weeks to complete and entailed a lot of patience as well as sanding, filler, sanding etc, etc. I believe it to be worthwhile though. 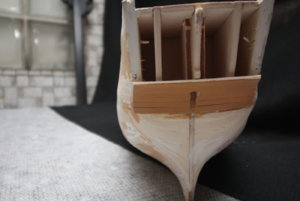 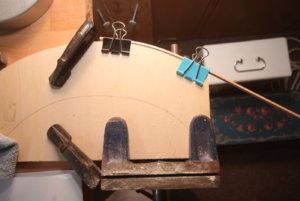 My bending tool for larger radii. I use different peices of wood with smaller radii for the tighter bends.
More to follow........

Nice build, I guess the ship I’m making is close to this, I was wondering why you stopped at the bow on the planking? What happens there?
the Grimsby has the same shape, I bent all the planks around the bow.

Thank you for the compliment.
It has to do with the instructions from Occre. The bow, formed from balsa wood, was added after application of the 1st planking. The bow planked with the second planking only. The same applies to the stern. There are advantages and disadvantages with this system. I believe it is easier to plank around a solid bow. The downside ist that the form of the bow using balsa wood has to be formed meticulously. 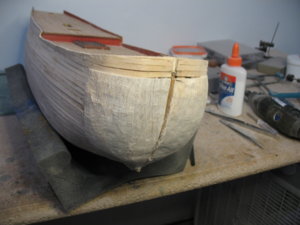 I'm a little farther along on mine. 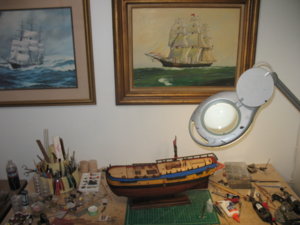 Dave,
I like the look of your Endeavour.
What are your thoughts on the Occre kit? For me the instructions are not detailed enough. Also, the drawings have no view onto the bow or stern.
I've completed the 2nd planking and now onto sanding the hull smooth. Question is, how smooth should a hull be? Were the planks on the original that smooth, I wonder?
Which stain did you use on the upper part of the hull under the french blue? I am contemplating staining it a light oak and then the entire hull with shellack. This is my first model and I have already drawn up a list of lessons learnt, which I'll post later.

I am using the kit as a starting point for basic materials but rely heavily on the book "Anatomy of a Ship Endeavour" I used yellow ochre below the French blue. I used Tung oil on the lower hull. 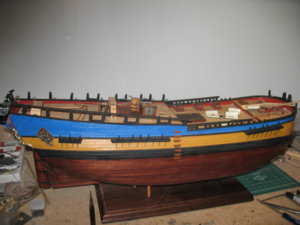 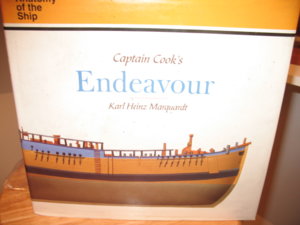 I added 1000 hand drilled treenails to the decks alone. 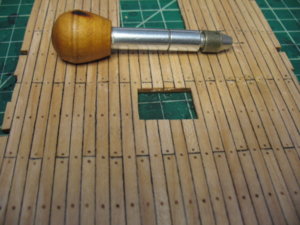 I added shutters to the stern windows not shown on the kit plans. I have a build log running on this site if it could aid you at all. 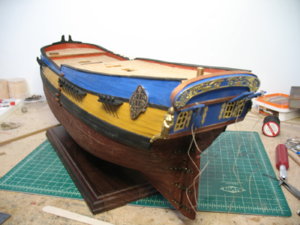 Dave,
If you are interested here is a link from another site, which provides in great detail the build of the Endeavour from Corel.

This is my first build of a model wooden ship. I chose the Endeavour as it is part of our nations discovery, and plenty of others being built to see gather tips and trips for the build. I am using 2 pack epoxy glue(no nails) for all the timber to timber joining. From what I have seen, the build m...

The build takes a slightly different approach to the one supplied by Occre.
Apart from the instructions, I'm following the same book by Marquardt, allbeit in German, when building the ship. The book is normally quite expensive and I was fortunate to pick one up on-line second hand for 15 €. The downwside is that it had no fold-out plans.

Unfortunately I am banned from that site for building on this one, so I am not able to use the link. But thanks.

PS. I am not on that site. I just searched for Endeavor at the beginning of my build to gather as much info as possibble

go to "finemodelships.com" and hit models sold you can look at completed models. There are four models of the endeavor you can also use as a reference guide.

Lovely models. Still, I'd rather build my own, more satisfaction than buying one already made. So many different finishing schemes for the Endeavour out there. Some painted, others not. Which one is correct, me thinks!
The anchors in Occre's kit are too large. Way out of scale. Only one by-boat. The list goes on.

I also go to the endeavor replica site to see how they used color on the ship.

Hi to all,
I hope someone will read this post who has experience in building the Endeavour.
The kit I'm building from contains only 2 anchors and provisions for the anchor ropes running into the deck are made for these two.
However, the Endeavour carried a minimum of 4 anchors and, having procured a further two anchors, I'm wondering how the additional two anchors would have been secured to the hull and where the additional holes in the deck for the anchor ropes would be.
Can anyone give me some pointers? It would be greatly appreciated.