Hallo Chaps,
You probably haven't missed me, but here I am back again. Since my last post things have moved along a bit....mostly lurching from one stuff up to the next! I was at one stage going to suggest my build log be moved to the scratch-build log.
These were the issues
a)the deck clamps were not securely fastened to some of the ribs due to some irregularity in the thickness of the ribs.
b)When releasing /removing the upper portion of the build jig those unfastened ribs moved every which way ..some cracked some broke and others took on an angle of their own making.
That was sort of remedied by judicious gluing and clamping at the same time the deck beams now needed refitting; remember they were fitted prior to the upper jig being removed and therefore were measured and placed in position on a rib frame under tension. So when the upper ribs were released the clamps and beams needed resetting.
c)Now it gets interesting........the ribs above the whales and those supporting the rails ,canon ports etc are of varying heights depending on their individual function. Trying to cut one to correct height without breaking it or damaging the neighboring rib proved impossible (to me anyway). So I cut the whole bloody lot down to near the required height and carefully pared away the surplus. This required replacing the ribs with individual blocks to replicate the ribs that should have pierced the rails /gun port portions.
Thank goodness for filler and that they will be painted black. My observation is that if the ribs had been left long enough to carry on through the rails there was no way they could match the "cutouts" on the relevant pieces. Sorry to go on a bit ,but.
Attached are some fotos of temp. dry fitting bits ..... Quite disappointed really, at my own lack of skill and also the necessity of having to second guess the instruction manual and prepare or pre-estimate what the next stage will require. Some of it not having a logical sequence ..
At thus stage of construction I have numbered all the pieces ,removed them from their respective boards ,sanded and shaped them with a view to trial fitting every single piece.. even those pieces where fitment may not be required for some time well into the future,(according to the manual).
I am now resolved to continue and to replace any inferior parts and to followmy own construction steps that will ,I hope, lead to a satisfactory outcome.
Cheers,Danw 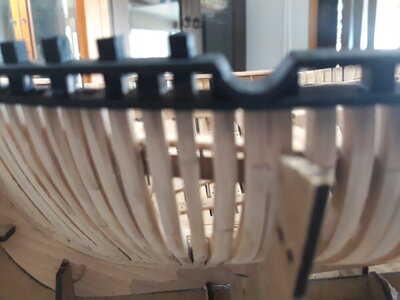 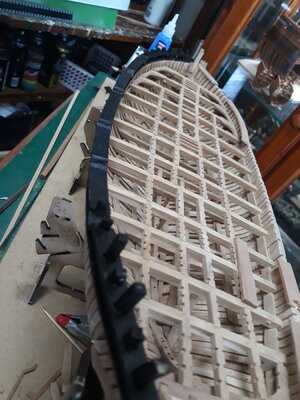 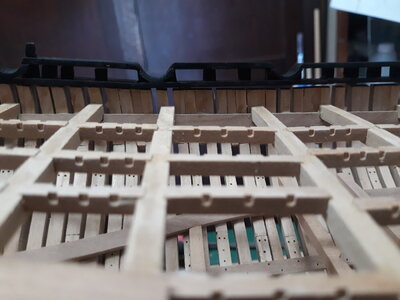 Have you considered home brew beer or a still?.

I'm a few days away from the CUT!. At least your recovery looks excellent., putting in the extra side pieces certainly locks it all together. Its definately a big challenge with the ribs. A couple of mine were going bannana shaped and I didn't notice till out of the berth. I have since convinced them not to do that (They had a stern talking to and are now behaving some what.) none of this 'wolf warrior' stuff with this Aussie bleeder.

Paul, Mate This " stern talking to " you mentioned ,is a little off" beam". It's the ribs man, the ribs (preferably with a nice sauce). Sorry ..but he made me do it.
Thanks for your encouragement. A still sounds attractive...I'll keep you posted!!

If you messed something up, you have hidden it pretty well, looks great to me.

My guess is that we will all 'hide' some of our mishaps at some stage, I certainly have.

Sorry for the trouble, Aussie!! Despite all of the challenges you have had, the result speaks for itself. Great job! Challenges are an integral part of our hobby. Without them, it will become an Ikea assembly - where everything fits precisely (sorry for the Ikea lovers). Those challenges make us think 'out of the box' and bring us closer to a scratch build. Overcome those challenges makes us stronger. I love the way you said to move your log to a scratch-build, but I like it more the way you overcome trouble! Keep up the great work, Daniel. BTW, In my Alert build, I plan to fabricate some parts from scratch as well, but this is a secret. Don't let everyone know...

The result looks very good, your efforts payed off. As you are leading the pack you are the one getting all setbacks.

@neptune I was already missing the allen key in this set.