The actual way the Psyche stern was built is an unknown. All you can do is figure in the circumstances at the time, who built the ship and take your best guess.

On the drawing by Strickland :"as built" the transoms are as such looking like they are bolted to a canted frame. The last pic you had could actually be that, a canted fashion piece bolted to the backs of the Transoms. Thanks. I keep learning.
Also your last statement is very true. How she was built is an unknown. She wass destroyed on the stocks in 31 therefore we will never know for sure how she was built. But from the other ships built in Kingston, Bell did have the ships he built in Amherstburg to use for the designs at Kingston. They were successful there and see no reason to doubt them in Kingston.
There was a phrase I saw in an article somewhere, but cant remember where, but it described ships built like the ones at Kingston. Their purpose was war. To be built fast and how long they last is a guess.
I'll keep drawing and asking questions and hope to come close to what she was.

I have added quite a bit to the Inboard works drawing and suspect I am done for now. Unless there are mistakes or missed items I am going on to other drawings. 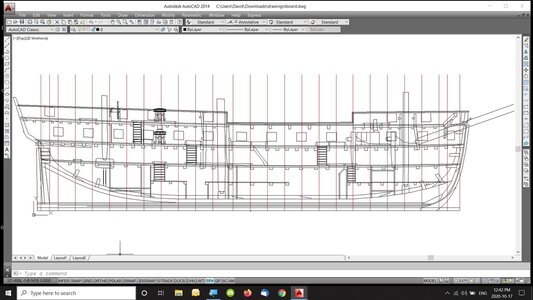 There was a phrase I saw in an article somewhere, but cant remember where, but it described ships built like the ones at Kingston. Their purpose was war. To be built fast and how long they last is a guess.

i also read something about an inspection of the Kingston ships after the war, the Admiralty sent inspectors to determine what to do with the ships. it was said they were not built to "admiralty standards" but were built fast and built just for war. The war ended before a major battle took place but judging from what was being built at Kingston, British may have won the battle.
I think perhaps one advantage the British had was to employ French shipwrights because the French were building ships on the lakes a 100 years before the British got there. So the French knew how to build ships and sail the inland seas.
interesting the war of 1812 was between the Americans and British but it was the Scottish and French who built the war ships for both sides. 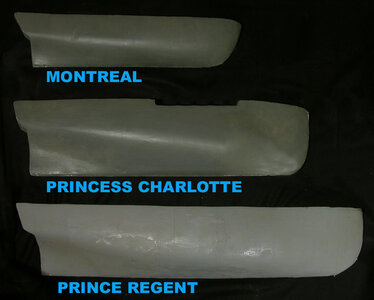 these ships were one of a kind design because they did not have to carry provisions there hulls were built for speed and built to carry "heavy metal" they were built for war. 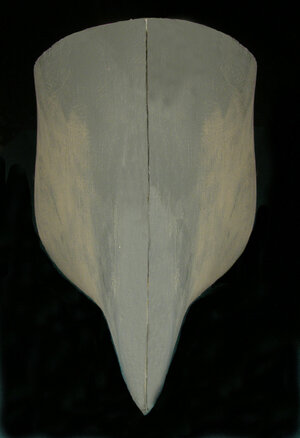 I know Dave is right about the designing of these ships from Admiralty plans. It just means that no matter how much research you do or many years of looking into the plans it comes down to it is just your interpretation of how she was built.
What I try to do is as much research and evidence to prove as much as possible that this was how she was built.
That said the question of the Psyche's decks are in question.
There are 3 details that I am going to use to show my case for the way Bell designed it.
1). If you refer to the x section of the St. Lawrence above you are looking at the decks against the frames. The beam is across to the other side of the ship, but what you will notice is there are 3 carlings situated against the frame( side) of the ship but cut into the beam. The 3" decking is on top of this. This holds true for the other decks except the bottom deck which happens to be the Orlop deck. Here they used lodging knees and a lot of bolts through the hull to secure it. This lodging knee was made from straight lumber not compass oak. Straight grained means it runs from one side to the other all are straight. No bending of the grain.
If you look at the inboard plan of the ship you will see, the 3" deck , below that what looks like a beam and then below that a smaller section of the actual beam.
Pic 1 This is also shown on the drawings of the Princess Charlotte and I also suspect on the Prince Regent plans as well. 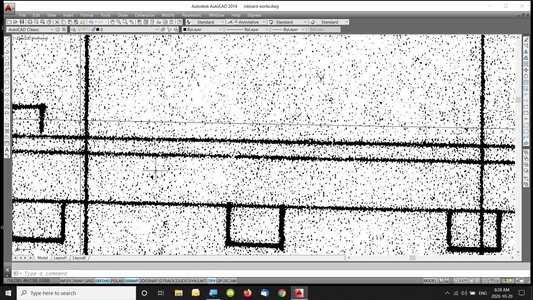 2) The second evidence is the deck transom of the top deck of the Psyche. This pic shows that the 3" decking and the carlings are indeed used and inserted into this transom.
pic2 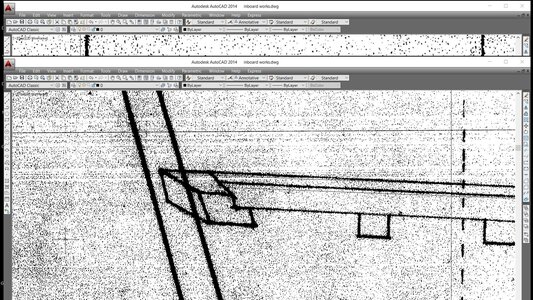 3) and lastly are newspaper advertisments at the time of construction of the ships looking for compass oak. It was in short supply or not at all and Bell had to make ideas work. The articles that state this are by Walker and Kopps.

So based on this evidence I have started the drawing of the upper deck of the Psyche, carlings included. 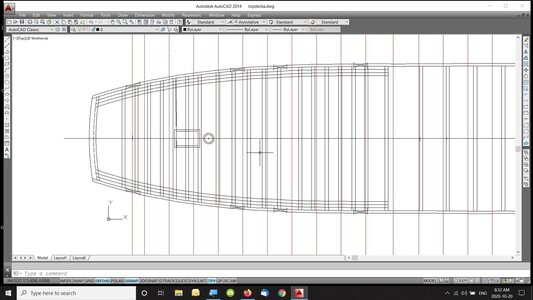 a while back Winston and i had this idea to post a bunch of drawings that anyone could use. What they are was when Harold Hahn gave me his plan collection of about 120 sets of plans i started to scan them some were CAD tracings others were originals. The ships built at Kingston were among the drawing collection. So this is where you might of gotten the drawings from.