@Peter Voogt Hi Peter - I believe it is in the works, yes!

Now I have the Bluenose kit, here is my introduction.
I am 63 years old and live in Woudrichem in the Netherlands, have been married with Loes for over 40 years and we have a White Shepherd. As can be seen in the build-log of 'The Lee', post #137. (<-click)
In the 'Heinrich pose' with the Bluenose-kit: 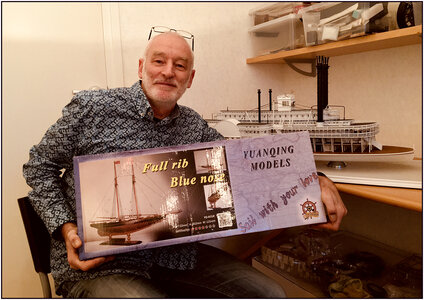 Woudrichem is a fortress town in the southern part of the Netherlands, situated near the great rivers. The Maas and the Waal meet here. And from the former control over the area and those rivers lies in that fork of rivers the castle of Loevesteijn.

2 years ago I had the opportunity to stop working. On 01/04/2021 I am really retiring.
I worked by the police my entire working life. Started in 1975 on the academy and placed in 1976 in Woudrichem. From 1990 at the forensics. First as a crime-scene investigator and in recent years as a Traces&Tracs analyst.
In 1995 I started working a little less there because I became a semi-professional windmill miller on the rebuilt wheat windmill on the ramparts of Woudrichem. I've been doing it for about 10 years. 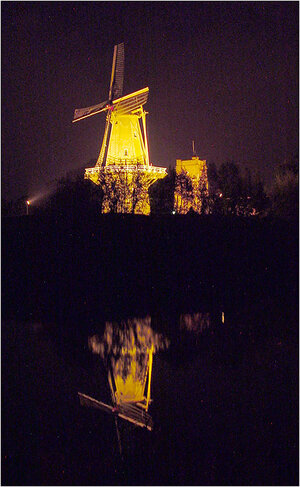 I then got busier with my sporting activities such as climbing mountains and riding MTB tours. As described in my build log. Also as a companion for such tours in a trekking organization of 3 of my colleague.

On a high pass in the Roemanian Transsilvanian Alps.
For those interested: the MTB is a titanium 11-ANTS (Dutch build) with Gates-belt drive and Rohloff Speedhub with 14-gears.

A lot of time goes on about 2 to 3 times a week of sports. Depending on the season and the weather I sit on the MTB or on the road with that bike with seperate road wheels, I stand on the inline skates or the ice speed skates, or on the Alpine or Cross-country sky's. But a bit of running is also fun. And every day, of course, out with that White one.
I also blew B-flat and E-flat tuba in a Brassband for many years. But I still lack the time to actively participate in it.
Partly because of the Covid-19 I now have more time to build the models.
Regards, Peter

Great to meet you Peter! All those activities you are involved in are making me feel guilty. Up until now I thought a brisk walk from the couch to the fridge was sufficient exercise!!

WOW! Now that is what I call an introduction! Thank you so much Peter for allowing us a glimpse of what must have been and still is a wonderful and active life. It is great to see our family members do this - it just all adds up to this wonderful group!

DonRobinson said:
Great to meet you Peter! All those activities you are involved in are making me feel guilty. Up until now I thought a brisk walk from the couch to the fridge was sufficient exercise!!
Click to expand...

Hi Don,
Don't by guilty! Everybody must fill in his/her own life. Depending on your skills, abilities and possibilities.
I also could have tell: I am 63 years old and building models.
Regards, Peter

Heinrich said:
WOW! Now that is what I call an introduction! Thank you so much Peter for allowing us a glimpse of what must have been and still is a wonderful and active life. It is great to see our family members do this - it just all adds up to this wonderful group!
Click to expand...

Thanks Heinrich.
See also my answer to Don
And I am looking forwards to the others. But to the others: do it on your own way. And what you won't tell, let I be in your mind.
Regards, Peter
D

Peter - good to be able to put a face with the posts.

I guess I'll have to finally post an intro, although it won't be nearly as impressive as Peter's.

I'm a recently retired 71 year old Software Engineer living in Canton Georgia (northwest suburban Atlanta).
Wooden ship modeling has been of interest to me since the late 1970's.
Over the years I've have several attempted and aborted builds. Life always seemed to get in the way.
Now that I'm retired, I recently resurrected my last attempt, the Bomb Ketch Cross Section and vowed to complete it.
I've made a bunch of progress despite my shaky hands and declining eyesight.
Bluenose construction should begin soon!

I've attached a picture and a couple of build shots, all from an iPhone with shaky hands. 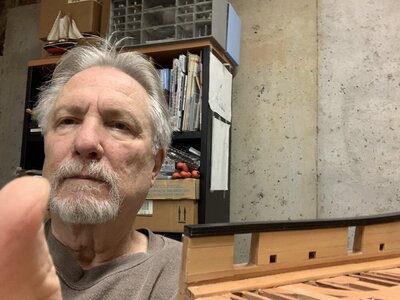 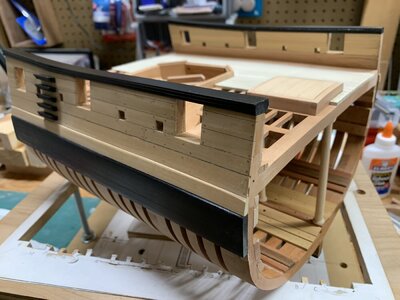 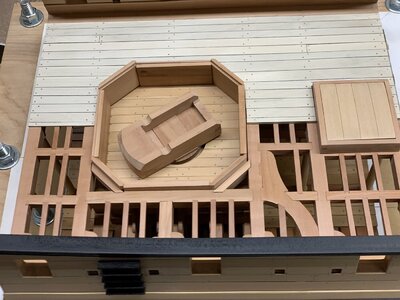 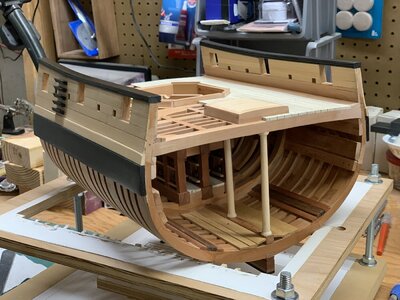 Nice to meet you Dave

Hello Dave, with the kit 008
Nice to meet and to know something from you and your builds. The cross-section looks great. Starting a build-log is a option
Regards, Peter

These introductions are great! I will post a pic with my Bluenose, once it arrives, in my hobby room where I build.

@Davefx35 Hello Dave and thank you so much for your introduction. As the kits arrive, it is great to see everyone's faces and what they are busy with. Looking that cross-section, I do not see "shaky hands" - only a very well-executed build! I am looking forward to your Bluenose build!
D

I TOO WILL POST A PICTURE AND INTRO, ON CHRISTMAS WITH FAMILY ONLY. GOD BLESS STAY SAFE ALL DON

Well to go in with my introduction here is my photo taken by my son!

My Bluenose kit and my USAF Retired hat! 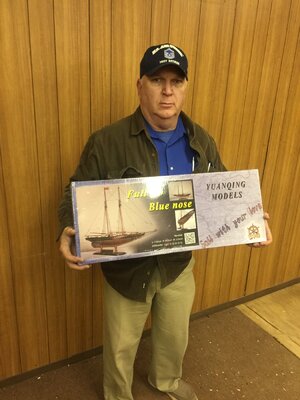 Kkonrath said:
Well to go in with my introduction here is my photo taken by my son!

My Bluenose kit and my USAF Retired hat!

Hello Kurt,
Nice to see the picture of the person behind the messages. The Dutch Police does not give / have Ritired-Hat/Caps . Or the have to come with a surprise at 01/04/2021.
Regards, Peter
D

Great! Nice to see You Kurt

Thanks for your years of service. Now you have a new opportunity with the Bluenose. Enjoy. Rich (PT-2)

Well thank you all for the nice comments.

I have many different hats most about the Air Force, as I collect caps as well as models.

My wife asked me why I was buying another AF cap the last time I got one on a holiday road trip, my answer was simple "I don't have that one yet"!

Like many others who served in your countries service or law enforcement departments, one of the things I like the most, was not worrying about what to put on each day and if the styles or colors matched, as we were told what to wear, for a guy that made it simple.

Wife was busy, so my 3 year old granddaughter took my picture with ship! Not bad actually!
I include one pic of my workshop as well. 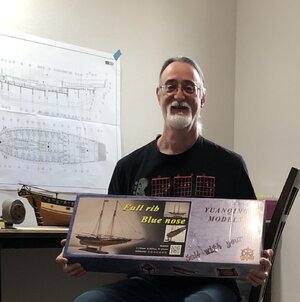 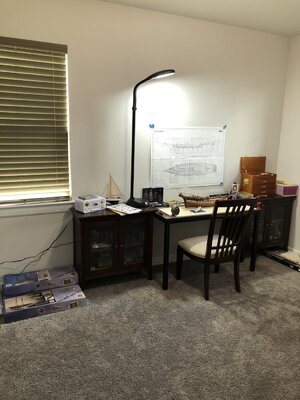 MERRY CHRISTMAS AND A HAPPY NEW YEAR TO ALL
Here is a picture of our back yard on Christmas Day 4" + or 100mm+ and then 2" or 50mm yesterday, had my snow blower out twice.
Regards Lawrence

PS will be a bit late starting my # 001 Bluenose, just no room in the Old Ship Yard 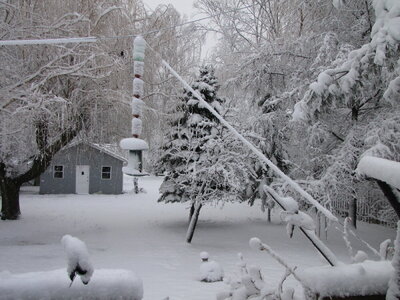