Apologies to all for the gap since I last posted on 'Natterer' - my old computer went on a go-slow - I would switch it on, go and make a cup of tea and drink it, and with luck it would be up and running by the time I returned!
The new computer fires up fully in 35 seconds - marvellous!
Anyway, I had a few teething problems with it including finding out what it had done with my build write-ups. Found them eventually, so here we go with Part 15.

Nearly there! There is a lot of debate in model boat circles as to whether a crew should be included on a boat. My own view is that an open launch such as Natterer looks daft sailing without a crew on board, so something had to be done. You will recall that the scale of Natterer is 1 to 4.5: this meant the average adult scaled down to around 16” (400mm) Now although I think my modelling skills are reasonable, there was no way I could produce figures at that scale and have them look remotely realistic. So I had to look elsewhere.

After a lot of searching, I eventually found Shirley Nason, of Kent Garden costume Dolls, who was prepared to produce me a couple of dolls dressed in late Victorian costume. It was an interesting experience as the two fields of model boats and costume dolls don’t often cross, and Shirley had her own way of doing things which didn’t always chime with mine! For example, Shirley’s dolls use bisque heads and lower arms allied to a body which is basically a rag doll. The dolls are traditionally displayed standing using a frame, and the lower legs (also in bisque) are hidden and tiny (No – I haven’t a clue why – they just do it that way!). My problem is that the crew had to be sitting down with feet showing, and the concept was alien to Shirley. We came to a compromise in that Shirley produced the dolls in the traditional way, and sent me the feet from a larger doll, which I grafted on. I then stripped the dolls of their clothes and modesty and produced an aluminium frame to which the body and extremities were sewn so that I could pose the dolls as necessary. This worked a treat, and the dolls now sit in the boat by means of a spike emanating from somewhere the sun doesn’t shine, to allow me to fasten them in when sailing.

The clothing Shirley produced was exquisite, and included all the embroidered underclothes, even down to the detachable bustle under m’ladies skirt! We had some problems with the father, as we couldn’t find a suitable male face, so ‘he’ is actually a ‘she’, with the addition of a set of whiskers. I won’t go any further down that route!

So good were the figures that we commissioned a further two from her, depicting a couple of children, who sit and stand in the front well, because the young lad won’t behave himself.

I probably can’t do better than reproduce the information given on the display card that goes with Natterer when she is on display:
Crew: Father is so proud of his new toy, and the opportunity to show it off, totally ignoring his rather apprehensive wife, who worries about her two children in the bows and the whole idea of boating. The son won’t keep still, and has to see where they are going, while his sister, who disapproves of everything her brother does, appears not to be enjoying the experience at all. Figures all by Shirley Nason of Kent Garden Costume Dolls.

Sadly, Shirley was getting on, and these were I think the last dolls she produced before having to give up commissions in order to look after her ailing husband 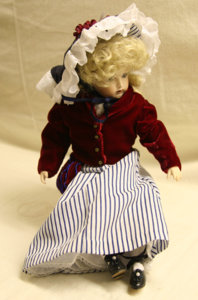 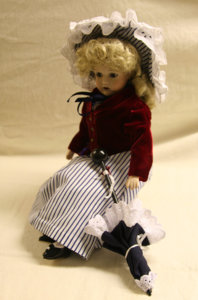 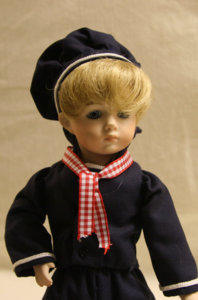 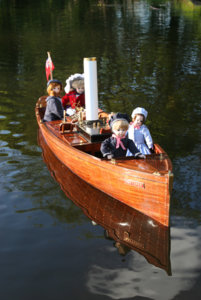 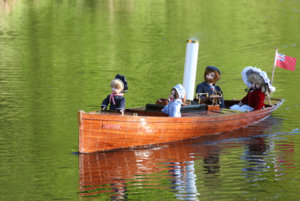 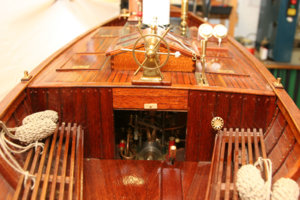 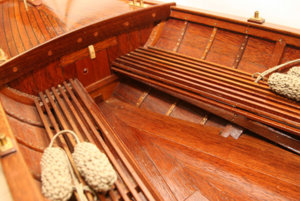 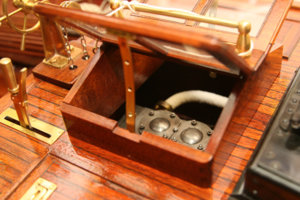 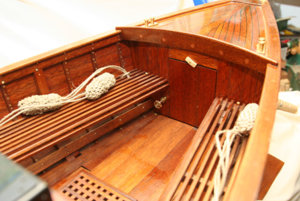 I think I will leave it at that for now, as SWMBO has other plans for me, so the final part 16 will hopefully appear in a few days.

Papi build me one

Charles QC said:
If I show this to my grand daughter I know what will be the response

The trouble is, if you take as long to build it as I did, she will have children of her own!

Thanks to everyone who has posted messages and likes - it is much appreciated!

Hallo Ted,
Congratulations for this model! This is really a very realistic model (looks like real on some photos) with great appearance (especially the metal works!)
And I am fully with you - I am sure, that from the distance, sailing the boat on a lake, the crew is looking also very realistic.
Such a model sailing, without these four figurines, would be not the same -

Many Thanks for sharing with us

Uwek said:
Hallo Ted,
Congratulations for this model! This is really a very realistic model (looks like real on some photos) with great appearance (especially the metal works!)
And I am fully with you - I am sure, that from the distance, sailing the boat on a lake, the crew is looking also very realistic.
Such a model sailing, without these four figurines, would be not the same -

Many Thanks for sharing with us
Click to expand...

Thanks Uwe,
Glad you agree with me regarding figures - you can get away with it in an enclosed (cabin) boat, but not open!

And so we come to the end of this saga!


I think this is the point where all the articles in the magazines say ‘on the water’.

Natterer was finally launched in 2010, some 33 years after the idea germinated. She sailed beautifully, and exactly on her marks, with no ballast required. Just as well, really, as by calculation at the start she was supposed to carry about 5lbs of ballast – remember what I said about the weight creeping up? Actually, I was very pleased, as 5lbs on a displacement of 80 lbs is only just over 6%.

he looks absolutely ‘right’ on the water, at a scale speed of about 6mph – the sort of speed at which these boats were normally sailed. She can sail much faster, but it doesn’t look right for the type of boat she is. Handling is impeccable; she turns well, and has a very steady attitude in the water, being very little affected by the wash from other boats, and cutting through waves rather than lifting excessively as a smaller boat does. Altogether very happy!

I’m delighted to say ‘Natterer’ took first in class on two successive years at the Northern Model Boat Show, and was given a ‘highly commended’ at Harrogate.

Although she looks absolutely ‘right’ with the crew on board when on the water, I wasn’t so sure she still looked correct when on display, so a spin-off project followed on in the winter of 2010, when I thought she might look rather good displayed on a timber carriage.

The carriage is a typical timber wagon of about 1900. When moving the Windermere steamboats on land, the usual recourse was to crane the boats onto whatever transport was available, usually belonging to the local timber contractor, and hitch up a team of horses or a traction engine. It must have been a frightening sight to see a boat such as ‘Dolly’ coming down the Kirkstone pass, as happened at one stage.

The wagon was going to be rather large, with a distance of 2’ 5” (725mm) between axles. A set of drawings was obtained taken from an actual wagon, and a friend arranged for a set of four steel ‘tires’ to be rolled and welded where he works. The tires are 9” diameter, so big!

I won’t bore you with the details of making the carriage, as obviously building a wagon is a different discipline to that of building a boat. Suffice to say it used up just about all my stock of beech, saved from a skip in about 1970, and I managed to file my way through several sheets of steel producing the fittings.

So to finish. 33 years and a lot of enjoyment, balanced by moments when I just wanted to heave her on to the bonfire.

Am I happy with her now she’s built? – Very much so!

Would I build another? – I haven’t enough time left! 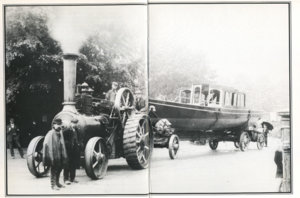 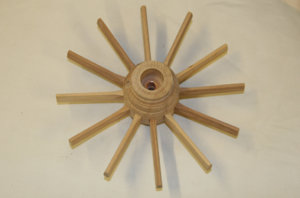 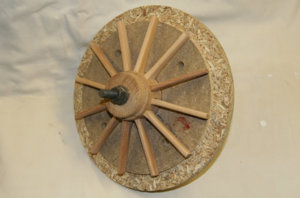 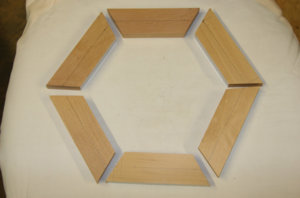 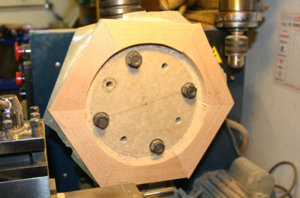 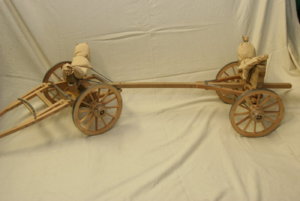 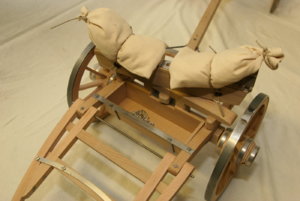 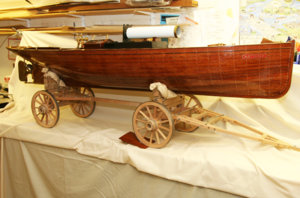 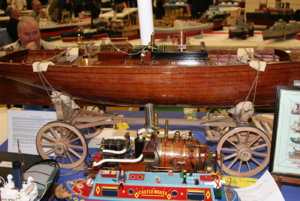 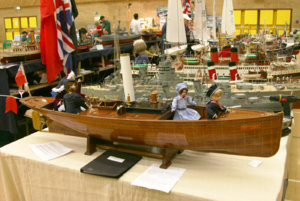 Well there you are, gents. Hope you have liked this presentation as much as I have enjoyed building the boat!
I will get back to building 'Kingfisher' now, and hopefully will have something more to post on her in the next few days.

The wagon as a kind of stand is great - ready to slip - great idea, very unique and very good looking

Uwek said:
The wagon as a kind of stand is great - ready to slip - great idea, very unique and very good looking

Agreed 100%
Superb realisation and it give a live context to the model.

The wagon is the model itself, and it is excellently built! Ted, I admire your mastery skills!

Ted, you have a very professional style of posting to this forum, with the log, photos and craftsmanship being superb. As Doc put it, Bravo!