While I was waiting for paint and glue to dry on my recently completed Swift build I decided to start on my next project, the Rainbow. It seems most folks have built the Endeavour which was the UK’s challenger to the America’s Cup in 1934. Endeavour had great success in the UK but ended up losing to Rainbow in 1934 4-2. A few years ago an updated version of the Rainbow was built using the original plans but with current materials and technology. It races against other rebuilt J Class ships which I think is pretty cool. I was looking for a little change in ship and have the Bluenose up next so I thought the Rainbow was a good warm up. I was not good at taking pics of the early stages of the build but will keep better record of the build going forward. I just finished the second planking and have been working on the mast and boom this week with a couple of days off for Thanksgiving coming up. 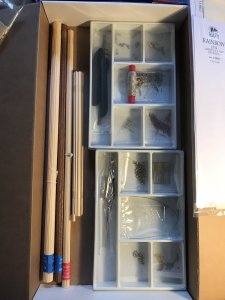 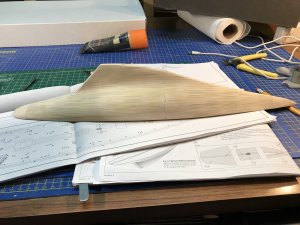 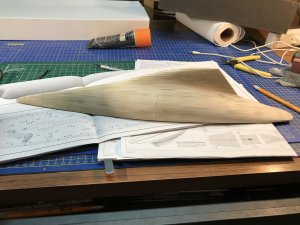 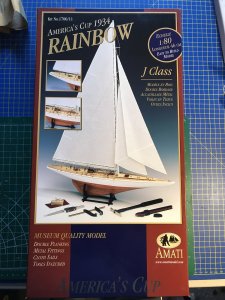 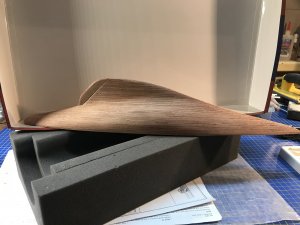 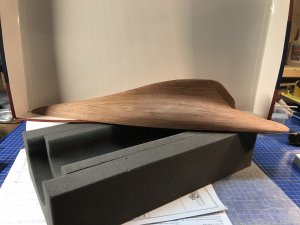 Looks great was this a solid hull? You will like the Bluenose I built that one years ago and it was a fun build.

Thanks!! No is was plank on frame.

that had to be a fun frame to build. Framing is one of my favorite things to do with Rigging being the most favorite. anyhow she looks great nicely planked

Oops. Sorry. Plank on bulkhead. Must have been a Freudian slip to some build in the long term future!!

Hi Barry
Will pull up a chair for this one also.
Nice work.

Took a break from the planking to work on the boom and mast. The mast is made by gluing 2 sets of 3 sections of timber then adding a half round dowel and a small end strip. Then sanding to create almost a pear shape to the mast and lots of eyelets to install. Cross trees are brass tubing. Interesting process. Boom is straightforward shaping and adding yes more eyelets. Putting them aside now to go back to planking the deck. 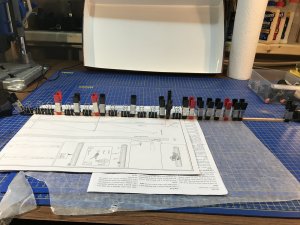 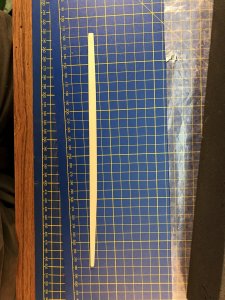 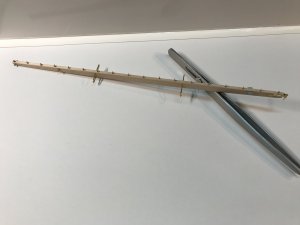 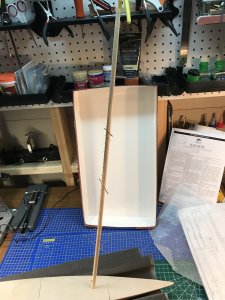 Deck planking finished and all holes drilled for deck fixtures. 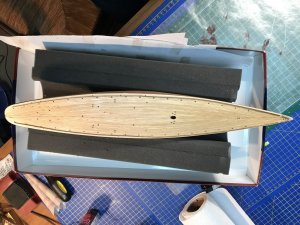 Put a stain on the deck and 2 coats of poly. One more coat of poly then will tape it and start painting the hull.

I have been going back and forth on what to do with the hull. After initially planning to leave the lower hull in walnut l have now decided to paint both lower and upper hull. While the walnut would look good the Rainbow was not a wooden hull ship. The hull was made of metal. So I will work on prepping the hull for painting next. Hopefully it will come out ok.

Barry1 said:
Deck planking finished and all holes drilled for deck fixtures. View attachment 65461 Put a stain on the deck and 2 coats of poly. One more coat of poly then will tape it and start painting the hull.
Click to expand...

I have been working on painting the hull. I decided to go with semi gloss white for upper portion and bronze for the lower portion. Getting the white right was a challenge. It’s not great but I am satisfied with it now. I have 1 coat of clear poly on so far. Will added stripes for water line and accent next and another coat or two of poly then hull will be done. Next up will be deck structures, rails and hardware. 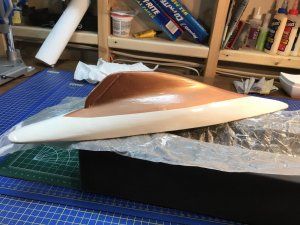 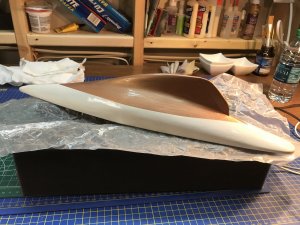 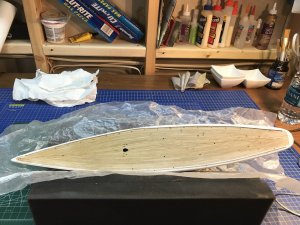 Made some good progress this past weekend. Painted and polyed the mast, added the rails and deck structures and prepared most of the blocks. I’ll put the blocks on the deck as I am rig the sails. Also started to do some of the standing rigging. I’ll do the rest as I put the sails on so it won’t get in the way. Working with 2mm blocks is not fun. 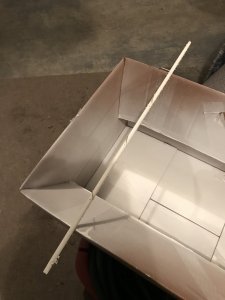 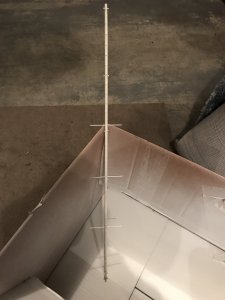 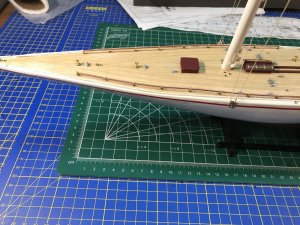 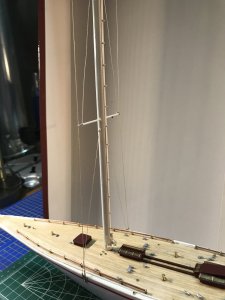 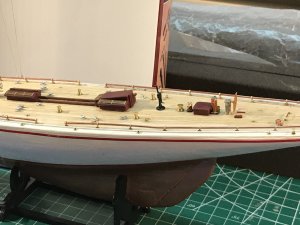 Barry1 said:
Oops. Sorry. Plank on bulkhead. Must have been a Freudian slip to some build in the long term future!!
Click to expand...

I made the same mistake (pure ignorance) but I was corrected.

Nice job by the way. You used different planking techniques on port and starboard, didn't you?

You have good eyesight! I did alter my planking after dealing with too many stealers on my first run, I did more tapering of the planking. I think this produced a better and tighter result. I’m still learning how to best lay out my planking.

Wow - Beautiful - very sleek design. Is that wood dowels as the rails or is that brass -- then again, it almost looks like copper.

Thanks, the rails are copper tube. This material was supplied in the kit. It was also used to form the cross trees on the mast. It is very pliable but still maintains its shape fairly well.

I added the spanker sail and related working rigging. Next up will be the final two sails and their related rigging. 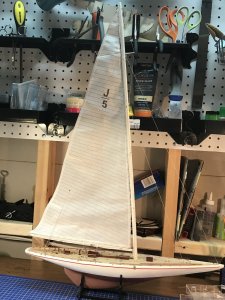 I thought I would add a little history of the Rainbow and include a pic of the rebuilt Ranbow-JH2 which races against other rebuilt J Class ships. This write up is courtesy of the J Class Association.
On May the 15th 1934, the William Starling Burgess Design J Class Rainbow was launched at the Herreshoff Yard in Bristol, Rhode Island, USA. She was built to defend the America’s Cup against “Endeavour” in 1934. The first 2 races were tough for Rainbow but the last 4 races she beat the Challenger Endeavour. Owner Vanderbilt laid Rainbow up in a dry dock and then refitted her. In 1937 she was sold to Chandler Hovey and contended for Defence of the Cup. Sadly for her, Ranger won and became the new defender for the next Cup. In 1940 Rainbow was sold for scrap.
YACHT REBUILD
Dykstra Naval Architects were chosen to give Rainbow a new life. A repeat client, the former owner of Windrose of Amsterdam, showed his trust in the Dykstra team to be the Naval Architects and designers for this new J Class yacht. The 46 meter schooner Windrose of Amsterdam set the Trans Atlantic schooner record at 10.5 days in 2005, the previous record of 12 days was set by Charley Barr with Atlantic in 1905.
The 40 metre J Class Rainbow is built in aluminum and designed according to the JCA (J Class Association) maximum performance rules. She launched in 2012.
After 78 years the famous J Class yacht ‘Rainbow’ sails again. This replica of the America’s Cup winner from 1934 was built by Holland Jachtbouw in Zaandam.
Rainbow was designed by Starling Burgess in 1933 and re-designed by Dykstra Naval Architects. She sails under the number JH-2.
Since her launch, Rainbow has won multiple awards, including Sailing Yacht of the Year (39m+) at the Superyacht Awards and the European Spirit of Tradition class at the inaugural 2013 Classic Boat Awards. 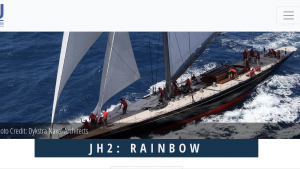 I finished the two jib sails and related rigging. The Rainbow is completed. I may add some rope coils not sure yet. I’ll wait on that for a bit. It was a fun build and something new and interesting to build. 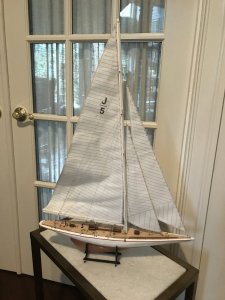 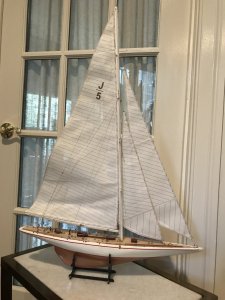 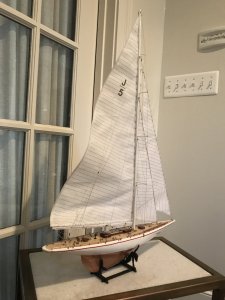 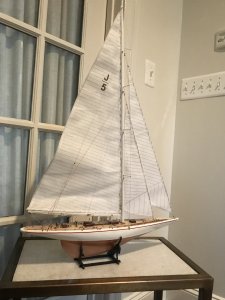