Finished with deck planking on the gun deck. Got the port side railing installed with some more work needed where it meshes with the forecastle.

False deck for the poop is cut with some slight trimming to be done. The major obstacles are cutting the hole for the ladder way to the captain's quarters and for the aft mast. Ain't no pre cut holes as in a kit. 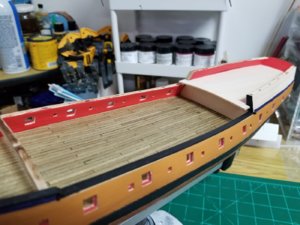 On some kits the reference line is pre-printed on each bulkhead. Not so on Rattlesnake.

On some kits the reference line is pre-printed on each bulkhead. Not so on Rattlesnake.
Click to expand...

Your build log and comments have been invaluable to me. Thank you. I am now trying to work out the beading line to ensure I get the contour right before I start chiseling.

Yeah boy the keel on Rattlesnake is so narrow. To get a good rabbit you need to chisel down a bunch. I ended up sinking small nails every 3-4 inches along the entire keel, through the keel into that center bulkhead. My other build Syren had an even wider keel and when I was completely done with the planking and I thought the structure strong enough...well, it wasn't. Broke the entire keel off and had to do some serious repair work. I learned my lesson. But you don't HAVE to do that, but when you have your finished hull in whatever device you use to hold the ship in place just don't put too much side load on it.

This information is very helpful. I still need to figure how to get the bearding line transferred to the keel piece. I know the a critical step.

Just leave about 2.0-2.5mm of meat on the side of the keel starting from the extreme bottom, uniformly from bow to stern. Bevel down with your chisel taking out about 1/3 of the wood on each side of the center bulkhead down to where you're leaving the "meat". That leaves about 1/3 of the material of the center bulkhead down there at the rabbit. No need to be pretty about it, rough is good enough.

I spent all of today working on the bulkhead to the captain's quarters. I'm going back and work on those center windows a bit, I'm not completely happy with them. 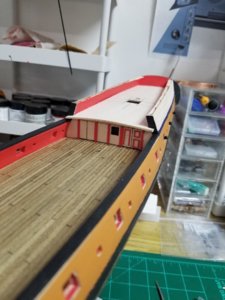 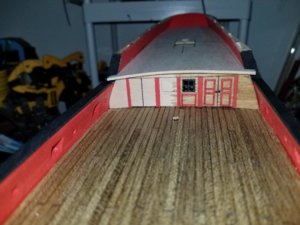 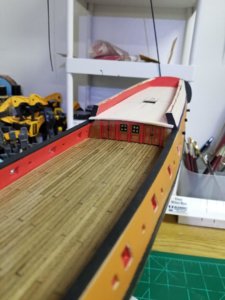 Forecastle false deck shaping up. Notice the distinct curve....I did not make the lower rail extend back far enough. I thought about it and rather than ripping the rails off and doing it again I decided to make the forecastle decking curved to accommodate the foremast. I have not the foggiest notion whether this geometry was genuine or not, but I can see it in my head and I like it. After laying down the deck planks (same teak strips) I'll also place some scratch built pillar supports. There are no supports shown on the plans but I just can't believe with a span of some 30' on the actual ship that there were no pillar supports to hold up the ceiling beams. 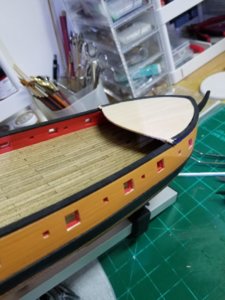 firedog5213 said:
Are you going to cut out the grate openings or just add then on top of the deck
Click to expand...

dog I'm planning only the one actual opening, back there on the poop deck where the stairs will be. On Syren and Bounty I used a black sharpie to blacken the area that would be covered by grating and that worked out just fine.

Finished up with planking below the poop deck and creating the holes in the false deck for the passageway, mizzen mast, and rudder stem. I figured there will be an extremely small chance of getting a view of the mizzen below decks so I scratched up a mast coat. The kit only included three laser cut mast coats and along with the fore mast both above and below the forecastle I'll need a total of five. 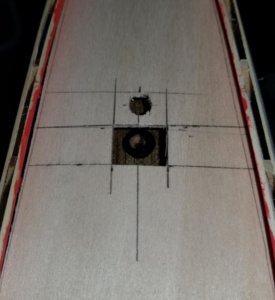 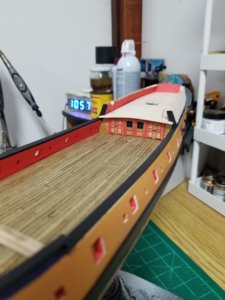 Finished up the most forward gun port covers complete with hinges and hinge pins. All the other ports will be open. 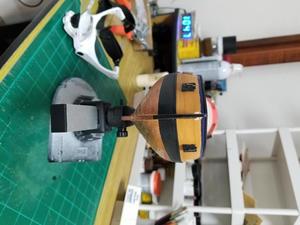 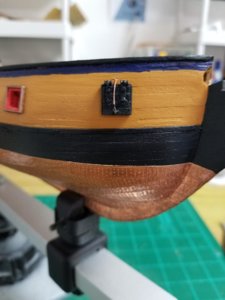 Couple of questions, did you use the kit gun port covers, and where did you get the gun port frames?

firedog5213 said:
Couple of questions, did you use the kit gun port covers, and where did you get the gun port frames?
Click to expand...

I constructed the gun port covers from scratch. The hinges are copper. The gun port frames are also after market. After looking at the close up picture I'm going to remove these two and redo them. The black paint is just too globby. I think ebony stain for the wood and liver of sulfur to blacken the hinges.

Let me look up where I got the gun port frames, I'll get back to you fire dog.

dog the port frames are from model-dockyard.com; Amati fittings.

dog the port frames are from model-dockyard.com; Amati fittings.
Click to expand...

Thanks, I was looking to add them to mine, I have seen post with them and without I am also looking for new buckets the ones in my kit were crap

firedog5213 said:
Thanks, I was looking to add them to mine, I have seen post with them and without I am also looking for new buckets the ones in my kit were crap
Click to expand...

I thought so too about those cast "buckets". The model dockyard has plenty of buckets as well. And scratch building the frame for the buckets is the way to go.

OK. So, I got a wild hair and decided to put some more detail in...if possible. I'm not smashing this kit but I figure an extra detail here or there might just be a good thing despite all the extra time it takes. There are three sheaves on each side of the hull to accommodate the sheets. On my Bounty it was just a hole drilled through the hull, on Syren it is a simulated sheave with the rope shoved in from the outside into a halfway drilled hole, and another halfway drilled hole on the inside of the hull lashed to a cleat. Both look just fine, even viewing the effects with a magnifying glass.

On Rattlesnake I purchased some mini pulleys. And then....I cut a hole in both sides of the hull, eeeeeeeekkkkk! So far so good but this one sheave took almost two hours to get the rectangular openings the right size and shape. I might just do the one sheave on either side port and starboard then go with simulated sheaves for the remaining four, don't know yet. But so far so good.

One thing for sure though, I am going to construct the eight chesstrees and kevels with the smaller pulleys. Those will definetely be seen with our without magnification. 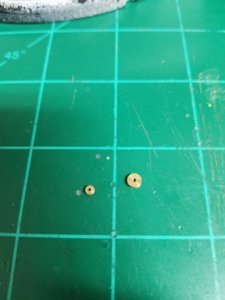 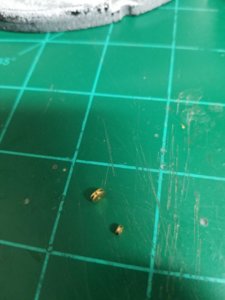 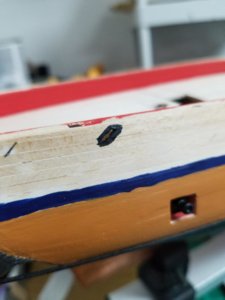 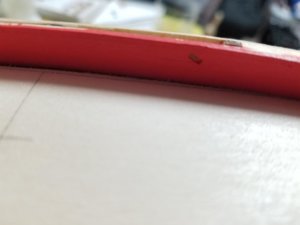