While waiting for additional rigging parts for my Mayflower build I opened the box for the Amati Viking longship. I have seen a couple of builds of Viking long ships and they are an interesting change of pace. Well once I opened the box I got sucked in a bit and after reading through the brief instructions worked on the keel and bulkheads. A couple of pics attached. I’ll work on the build as an interlude from the Mayflower. 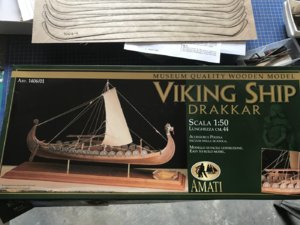 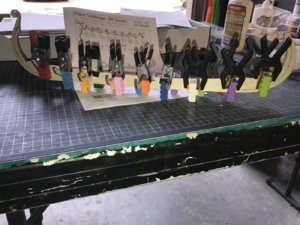 ...LEGO is everywhere, the use of it - obvious! This time to make sure the bulkheads are 90* to the false kill. Great idea. Taking a chair and will watch your build,
D

That statement in the box: Museum quality kit, must not be taken literally but it can be turned into a decent model if you are ready for a lot of work...

Here is mine, after a LOT of modifications: 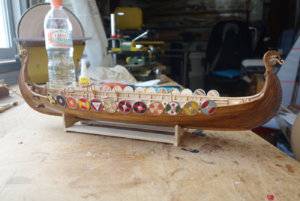 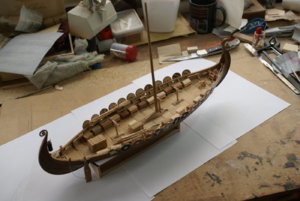 Dicas said:
That statement in the box: Museum quality kit, must not be taken literally but it can be turned into a decent model if you are ready for a lot of work...

Here is mine, after a LOT of modifications:

Thanks for sharing. Beautiful detailing work throughout. You really added quite a bit.
D

Barry1 said:
Thanks for sharing. Beautiful detailing work throughout. You really added quite a bit.
Click to expand...

Yes I added a lot of details, I used almost only the keel, bulkheads and planks. But it was a hell of a fun. My fisrt ship build ever and the one I like mosr yet. It teached me to work with hard woods, since till then I used mainly balsa in my planes.

Regards and have fun with your building 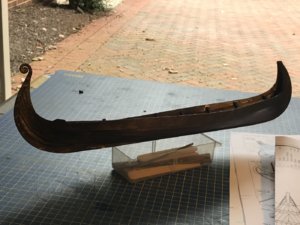 After looking through a few pics of Viking ships I decided to stain the hull planking a dark walnut. The hull is now planked with some touch up on stain needed. Next up is false decks and deck planking.

I finished adding the false deck and then doing the planking. I followed the plan of offsetting planks. Also drilled all holes for the oars and shrouds. I plan to share the sail down on this model so oars will be stacked in the racks. Working on trestles now. I plan to stain the deck, still deciding on stain. 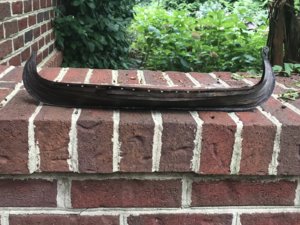 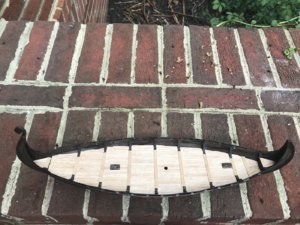 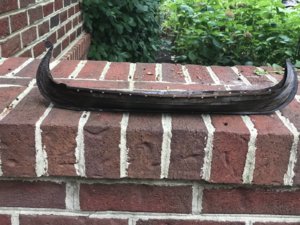 This model does go together fairly quickly. I stained the deck with golden oak, added all trestles, cleats and oar racks. Next up will be to get rudder assembly and anchor made. Then it will be mast and yard. 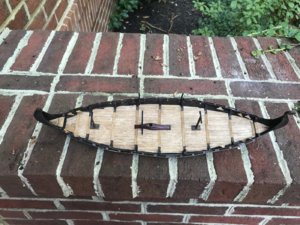 Will be real nice when complet

Was in Gdansk in 2008 they have a very, very good maritime museum and 2 or 3 Viking ship that they found on there coast here. 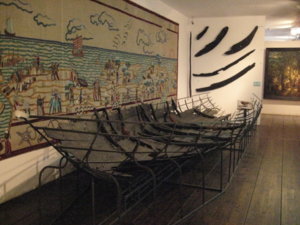 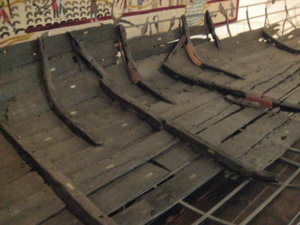 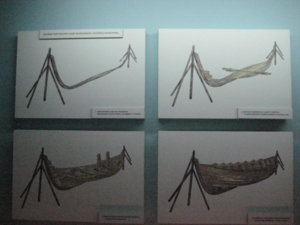 Charles QC said:
Will be real nice when complet

Thanks. Nice pics. Much appreciated.
D

Maybe this helps too:

Hello Here are some photos taken during a trip to Norway, maybe it helps someone considering building a Viking ship.
shipsofscale.com

Dicas said:
Maybe this helps too:

Hello Here are some photos taken during a trip to Norway, maybe it helps someone considering building a Viking ship.
shipsofscale.com

Thank you for referring me to this prior post. These pics are very helpful and educational. I have some renewed confidence in some of the choices I have been making regarding this project. I also have the National Geographic publication on Vikings that I would recommend to anyone interested in learning about their history and culture.
D

Some details from the Oseberg Drakkar (Oslo Museum)

Some details from the drakkar Oseberg currently in Oslo. This particular ship was a burial chamber but believed to have been sailed. The place is very dark and flash light is not allowed for obvious reasons, so the pictures are a bit on the dark side. Bow. General view of the bow and oars...
shipsofscale.com

Thanks again for the reference pics. They are very helpful.
I decided to add one more coat of golden oak stain to the deck and am now happy with it. 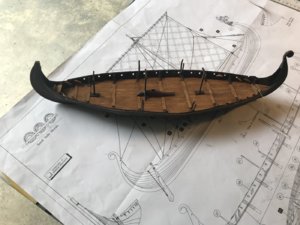 I decided to get started on the mast, yard and swinging booms. 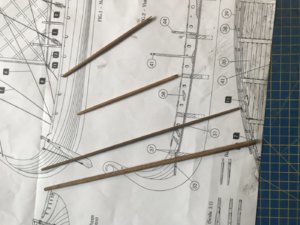 Next I worked on the deck accessories - bucket and anchor supplied with kit will be used. I didn’t like the one chest supplied so I made several of my own. I’m not sure how many I will display on the deck but I have plenty. The chests served two purposes one to hold each crew members belongings and supplies and the second as the seat from which they would sit and row when the oars were being used. I also made up and test fitted the rudder. 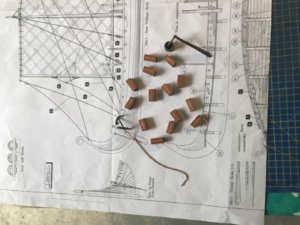 Lastly I decided to show the shields on the side of the ship and so I painted the fronts in two designs, a red and white and a black and yellow. All were hand painted so a little wobbly on lines. There is apparently great debate on whether or not Vikings displayed their shields on the sides of the ships. Given the state of the ships as they have been unearthed it’s not clear. There are theories on both. Some say no way they were displayed others believe they were used for defensive purposes to protect the crew from incoming arrows and such while rowing. I am going with the second theory purely out of builder preference. 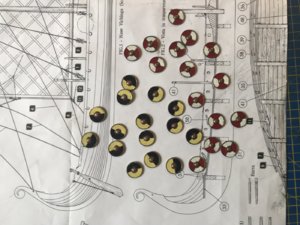 I spent the past weekend and last few days working on the sail, fabricating, painting, adding the blocks and parrel, attaching the sail to the yard and yard to mast. Then added the 5 shroud lines to the mast. It’s now set to set on the ship and add rigging. With all my additional parts for the Mayflower now in hand coming to the end of this relatively quick build is at about the right time. After rigging is complete assembling the oars is last major step. 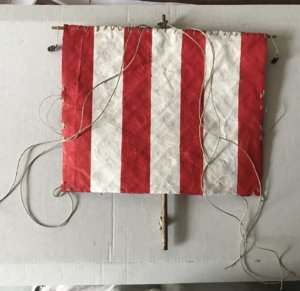 The admiral has suggested the weathering as well. I am still debating it a bit. Weathering would add a more gritty/well used look to the sail. I generally like this look better. Leaving alone is a bit bright but it presents a nice contrast to the darker stain on the ship and tends to darken the sail a little. I’m going to think on it for a bit.

I decided to leave the sail as is and not add any weathering. The rest of this week has been spent on making the oars. There are 14 on each side and while they will only be shown in the oar racks I figured if I ever wanted to change the display I would have them. The pic is of the first 14. They are all in various lengths to fit where they would be used on the ship. Sorry for the messy pic. 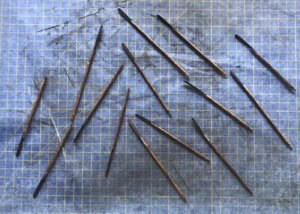