Thank you very much for your comments.

As to the solutions:
- I agree one hundred percent that wider slots will weaken the frames at the upper side. That was why I chose not to file or cut the slots wider.
- I think the one-piece 1mm MDF would be a great solution to any potential variances of the supplied planks.
As far as "verspringen" goes: "I don't think there is an English word in the English vocabulary that could describe that accurately!

As always, thank you very much for your excellent customer service!
Kind regards - Heinrich

Time for an update ... (no I did not plan on it being this soon). Yesterday, I know I said I am working on the cannon boxes - and indeed I was / am. Nineteen are now completed. But this morning, I was dying with suspense to see if my gunwales were in order and if any further work is needed. And ... the only way to know that is to attach the boxes to the gunwales and to dry-fit the cannons. So, off to work I went ... and 10 uninterrupted hours later, the starboard side is complete. I know it's a long time, but I hate CA with a passion and try as much as possible only to use PVA. This means that there is quite a bit of drying time involved.

I have to mention here that with the cannon boxes I deviated from the instructions. According to the latter, you first have to installed the back
plate of the box on the gunwales and then the whole box gets assembled around that. Whilst that is no doubt good for accuracy, I just did not see myself fit to it that way. I therefore first assembled the boxes and then glued the completed box to the gunwale. After meticulously measuring out the exact locations of the holes on the plans, I transferred the markings onto the gunwales. Luckily the holes for the push-in cannons are pre-drilled in the back plate of the boxes, so once the holes had been drilled in the gunwale, it was a simple task of just aligning the two holes. 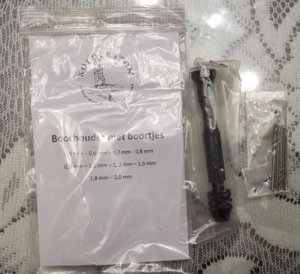 For drilling the holes, I used the Kolderstok-supplied drill holder and a 2mm screw bit. This worked very well and there was no splintering of wood or anything untoward. 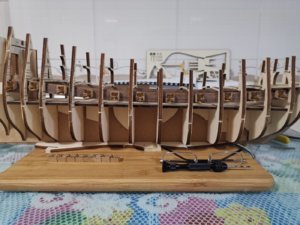 The Haarlem has TEETH!!! An no fewer than 11 of them on the starboard side - cast-iron 36-pounders. Obviously the cannons still have to blackened. NOTE: The cannon second from last towards the stern sits purposely higher than the rest - as per the plans. 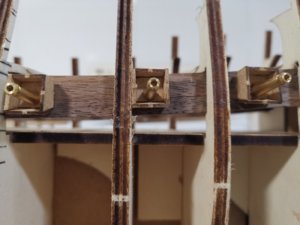 Close-up of the three cannons at the bow. That is enough to catch the attention of any would-be pirate or potential ransacking! Note that the cannons were just fitted loosely without any adjustment of the holes for alignment.

However, despite that ... just look at the curvature! 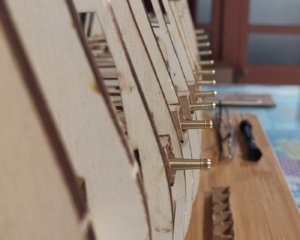 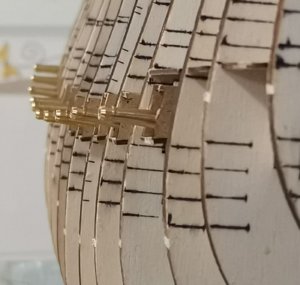 Tonight, the coffee is going to taste extra good!

Thank you all for your interest and for following.
Kind greetings - Heinrich

The Kolderstok boxes clearly have one content which I try to put into it, but I am never sure if it's really there.
It's called the gripping factor ....

Btw - the hand drilling set is an extra - it is not a standard item in the box.

You call it the gripping factor ... That is very true, but in my case it's probably more like the obsessive factor! I just HAD to see if the gunwales worked out.
Heinrich

Hi Maarten.
Thank you very much. The cannon boxes still need to be faired according to the line of the bulkheads and painted black. Then, of course the port side needs to be done, but today, it's first more research.

Quick question for all the experts out here, if I may. Has anyone got any experience of diluting PVA (non-water resistant) glue with water in the ratio of 30:70 and then brushing it into the joints of glued parts as a further strengthening exercise? Is it worthwhile and doesn't it leave a kind of residue on the wood afterwards?

A penny for your thoughts please.
Kind regards - Heinrich

Quick question for all the experts out here, if I may. Has anyone got any experience of diluting PVA (non-water resistant) glue with water in the ratio of 30:70 and then brushing it into the joints of glued parts as a further strengthening exercise? Is it worthwhile and doesn't it leave a kind of residue on the wood afterwards?

A penny for your thoughts please.
Kind regards - Heinrich
Click to expand...

I did,and used a tiny syringe

Thank you very much Zoltan. The syringe is a good idea!
Heinrich

Heinrich said:
Thank you very much Zoltan. The syringe is a good idea!
Heinrich
Click to expand...

You can buy on ebay cheap a set with many sizes

Hi Heinrich,
On the frames yes, why not. On you planking no, it will enter into the pores of your wood creating issues when oiling or otherwise treating your planks.

Hi Maarten, thank you for your reply.
Yes, I was thinking of the frames and the cannon ports. The ports are only 1mm thick, so there is not much surface area for the PVA to bond to.
Kind greetings - Heinrich
D

Hi HEINRICH, i agree with MAARTEN, i had been doing that for a long time and my models were turning out not so good even with frames to me a NO, NO, my blanford frames were a total disaster had to almost completly plank it, NOW I TAKE EXTRME CAUTION WHEN PLACING PARTS, i do not do that anymore, reather have some iny gaps showing then a discolored part. JUST ME. Don

Hallo, Don. Thank you for your input - it is much appreciated!
Kind regards-Heinrich

Dear Smelly. Thank you so much for your kind comments. It is really appreciated.
Kind regards - Heinrich

As you will recall from my previous post, I fitted the cannon boxes on the Starboard side and this exercise was repeated on the Port Side. 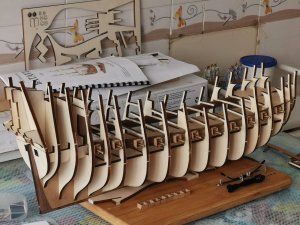 This picture still shows the completed cannon boxes on the Starboard side.

Fitment of Deck "A" was next. As you can gauge by the letter "A", this is actually the first-level deck and comprises of six separate parts: two each for the front, middle and rear sections. 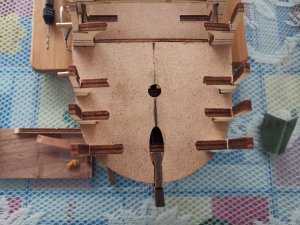 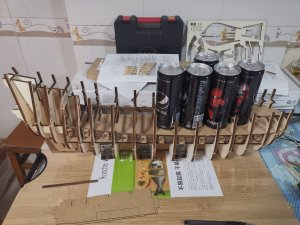 The Pepsi cans of cooldrink were ideal to bear weight on the middle deck while drying. In the foreground the two rear deck pieces are visible. 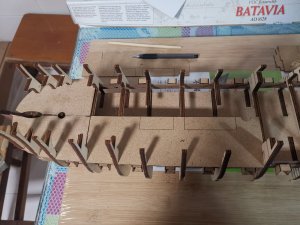 Port Side of the Middle Deck installed. 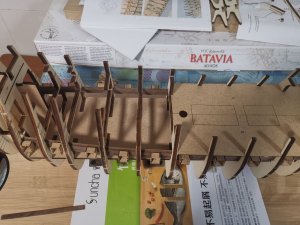 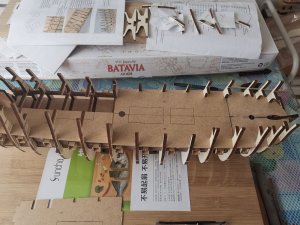 Starboard side of Rear Deck 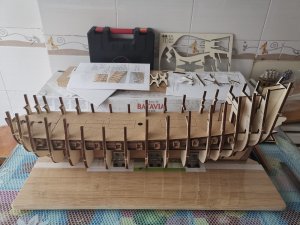 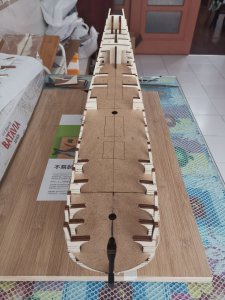 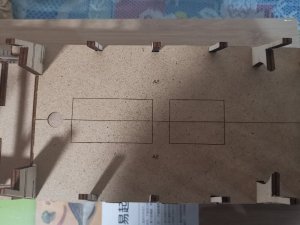 With regards to these two front hatches in Deck A, Kolderstok gives the builder two options. They can either be cut open or can remain closed, covered by a grid which, in turn, is covered by canvas. Opening the hatches will require a considerable part of the false deck underneath to be planked. I chose to keep the hatches closed for two reasons. The false deck underneath is completely empty and apart from the planking, nothing else is displayed. Secondly, I need all the space I can get on Deck A as I need to find place for six cannons that were not part of the original Batavia build. 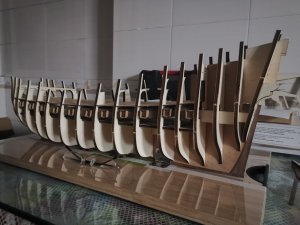 As parting shot, this picture shows the shipyard when it closed for the evening. You will notice that at the stern the five supporting beams for the front deck are already in place.

Thank you all so much for following and for your interest.

Pathfinder65 said:
Oh my, I’m late to the parade. What a great history lesson and explanation of your build process. I hope there’s a seat left in the balcony.

Heck, this is great info, and I will take a basement seat if need be!

Thank you for the kind words. I am glad you like the build log. No need for the basement; we'll just make one big circle, then everyone can have a front-row seat.

Hallo Heinrich - very good progress - I am very happy to see regular your progress reports - very interesting to follow
I have one question: But maybe it is only a distortion of the photo.
Please check the second gun - I have the feeling, that it is too far inside the model, if yes, you will recognize it very much later on when the ship is planked.
I made a red line connecting the end of each gun, where you can recognize it...... 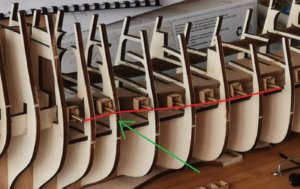