Hi Paul,
Yes I followed the instructions re the stickers etc. 'Annyhoo, I have remade a couple of bits that I had butchered and all is looking good.
I am finding that the cradle /berth is limiting some visual checking of jonts etc. Not a "biggie".Looking fwd to further videos..If they're not drying quick enough try a hairdryer on them.

As I wait for the glue to dry... I was lucky enough last year to visit the Greenwich naval museum and picked up a book on "Navy Board Model Ships" by Nick Ball and Simon Stephens...An absolute treasure trove of photos of exquisite model made as far back as 1650..
If you can ever get hold of a copy grab it...

Waiting on a decision on the ribs I asked in Jollys log. Else it will be a dry fit vid only.

Looking at the "grinding" required on the ribs in the bow section down to about#17 ( except of course at the very bow) or so, I am tempted to mark the required area and grind it to the marks when fairing the ribs later on. This would minimise the risk of taking too much off ...I would value any thoughts on the matter.(Of course sanding would be required to ensure snug fit to the keel etc.)
Look fwd to your thoughts.

Hi Daniel
I'm Attempting to decipher the instructions in the manual at this point. It shows and talks about he parts 5-20 with the parts cut down on left internal & right external, so fairing may not be relevant. I'm going to try some carboard cutout copies of the parts to see how they lay. it seem very strange to cut inside & outside alternate edges.

so I have placed 4-6 in place untaperd and they look fine. They sit correctly on the keel and suggest fairing later. Mabye some can help here who has done POF. Uwek may be able to assist as he has the kit and has done POF.

I have done a POF previously. I have found that as long as the dimensions i.e. measurements are close to spec. one can "fair" the ribs with reasonable accuracy, thus giving the ribs a smooth and consistent taper.
It is not unlike preparing a "POB" for accepting the layer of planking .Let's face it, on the original vessel the ribs would need to be faired to provide the greatest practicable surface area for the planks to be affixed. (refer cant frames).
As a matter of interest, the more I look at this , the greater the disparity there is between computer aided graphics and traditional ship wright's practice. Just sayin'.

Well looks like we go with the clean up later as they fit well in the cradle keel and look ok. I'll justs mark them as suggested with pencil. I dry fit the entire rib set before I glue.

A bit of an update... I've been busy with the ribs, sanding and dry fitting. All appears to going quite well. Naturally care is required but overall so far the enjoyment level is quite high.
I am looking fwd to any re-interpretation of the instructions.
.I have found that by consulting the full size plans provided with the kit, studying the AOTS book and not "hanging "on every word of the instruction manual ,things flow along reasonably well.
The attached photos show dry fit of some ribs. The more sharp eyed of may notice some spacing irregularities but remember this is a dry fit so far. 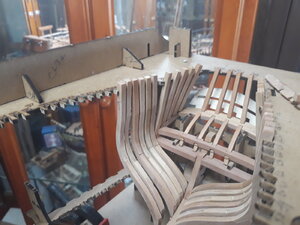 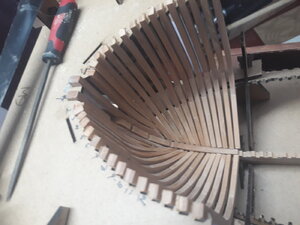 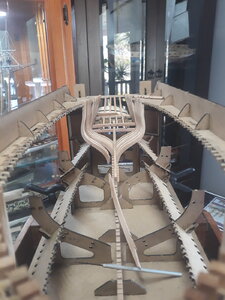 You have been a busy boy, I agree its heaps of fun so far. Well done. You Jolly & JohnA all get a shout out in the video for the Ribs contribution!. Well done. The templates make life so easy.

Wow you are fast. Are you planning to send your ship down the slipway before some of us even get a chance to order the wood? Well, it's better to get it over with than keep turning the knife in the wound

Hi PoulD,
No mate , as I said this is a dry fit exercise.. I'm trying to avoid any surprises or inconsistencies that may occur during construction. I really hate it when something occurs ,an error perhaps, and one finds that it was caused by something one did two or three stages before!!!!GGGRRr!!!
This initial exercise is more of a way to understand and come to terms with the process.
I am reminded of a joke that is probably not appropriate for a setting as genteel as this but it does refer to one wanting it good or wanting it fast!!

Just to let you know that I have not drifted off... am busy doing the ribs..
Alert ribs .
Not spare ribs done in bbq sauce.!!!.
As I mentioned elsewhere do not get distracted when selecting the parts from the boards..It can lead to difficult moments and unseemly language.

I notice in Jimskys log a builder(Markus) is enquiring re part no.BL30 . It appears that I had a similar problem. I resolved it by remanufacturing the part .This involved dry fitting or temporarily fitting surrounding structures and then cutting sanding more cutting and sanding until a suitable fit was achieved.
Construction of the ribs on my Alert continues.
I have not posted pictures of this process for fear of sending readers to sleep.
Nonetheless it is coming together nicely and I look fwd to submitting progress pictures in due course.
Cheers, Danielw

danielw said:
Nonetheless it is coming together nicely and I look fwd to submitting progress pictures in due course.
Cheers, Danielw
Click to expand...

Hello Dan, nothing can justify your build log without images\photos We need them badly...

Alright then Jim, I've got a couple of shots and I might add some pointers and /or places where one might fall into a bit of a trap.
As I have mentioned before this kit is hugely enjoyable. When fitting /gluing a certain piece or part one has to be so mindful of the next step or stage in construction and how that particular part relates to future stages.
The photos show the stern/rudder post area...warts and all. I feel the when the hull is released from the cradle there will be a fair bit of finessing required.
Another shot shows a rib sitting on the keelson/keel assembly... Ensure that those ribs are properly seated.
Some sanding may be required.
I have penciled in the rib numbers on the opposite side of the upper cradle just as a precaution.
My build base is a glass shelf from Bunnings. It is wide and long enough to accomadate the Alert with a bit to spare.
This is mounted on a jury rigged "plinth" as I prefer to sit when cutting /sanding etc. and to stand when fitting. Being at almost eye level and free-standing it gives me a 360degree vantage point as well as good horizontal views.
And so back to the yard. 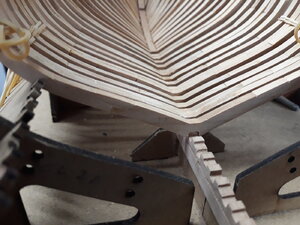 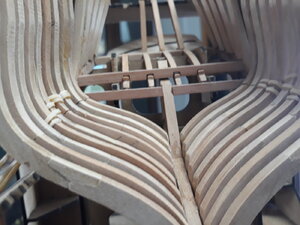 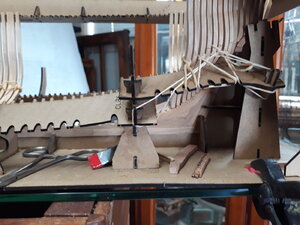 Many thanks Danielw! The images are great, and you advanced in your build much further than me, but hey...you are the first who started!! LOL
So...you opt to treenail the chocks or you will do it later in the build?

I am at this very moment considering those options....I like the template from I think it was Jolly Roger.....and Wang's recent photos are astounding...
I'm trying to research whether the bolts or some bolts were "counter-sunk; level with the surface or proud of the
surface.
I am going to experiment with the following; drill an appropriate size hole
fill that hole with a black filler (ebony)
lightly sand to clean up the surface.
I am talking quite small amounts of filler of course and will need to see the effect on the surface surrounding the bolt hole.

danielw said:
I am at this very moment considering those options....I like the template from I think it was Jolly Roger.....and Wang's recent photos are astounding...
I'm trying to research whether the bolts or some bolts were "counter-sunk; level with the surface or proud of the
surface.
I am going to experiment with the following; drill an appropriate size hole
fill that hole with a black filler (ebony)
lightly sand to clean up the surface.
I am talking quite small amounts of filler of course and will need to see the effect on the surface surrounding the bolt hole.
Click to expand...

I think the 'chocks' joints assembly was reinforced with wooden dowels (but could be just wrong). Here is the definition of 'bolt' (from webster dictionary):
a metal rod or pin for fastening objects together that usually has a head at one end and a screw thread at the other and is secured by a nut
This being said, the head should be hidden inside the 'chock' to lay the planks even. Also, there should be a 'nut' on the other end of the 'chock' also hidden in order to properly lay down the outer (hull) planks. Hmm...in in such a case the 'chock' will have less 'meat' and would be weakened, IMHO. The double frame, however, was tightened using metal\brass bolts.
I plan to go with dowels imitation, in this scale 4.00mm should be sufficient...However, to make 4.00mm wooden dowels will be difficult. I am considering using brass wire instead, but preliminary testing didn't convince me 100%, they kinda too shiny. The brightness should go away with the time, though. Optionally, I might use the putty... Need some inputs, folks.

Here I got experimented, the pattern is wrong (extra nails) but, I just wanted tested to have an idea (never use brass wire as treenails) 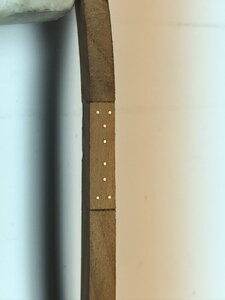