Hello friends of the baroque ship.

As I am starting the build of SAINT PHILIPPE in 1/64 let's do it in an proper way - click for music:
March de Triomphe

SP was launched in 1693 as replacement for the fire assisinated SAINT PHILIPPE of 1669 burnt down by the British after beaching the damaged hull.
SP fought her only sea battle at Malaga 1704 and there are three paintings I do know from what only one shows a abbreviation of her: 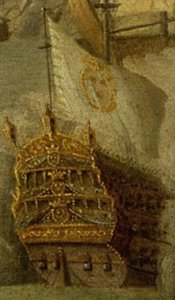 The ship has got four gunports under the transom - but there does the similarity does find its end.

The other source we have got are lines and former plans 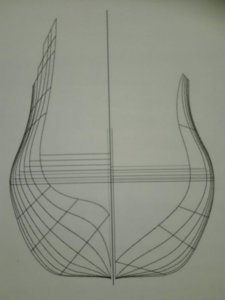 and a decorations drawing from the Toulon ship yard: 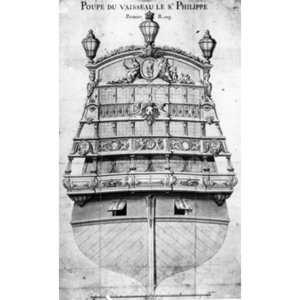 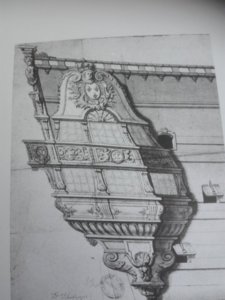 There are several differences to the Lemineur reconstruction published by Ancre - we will discuss these later on. 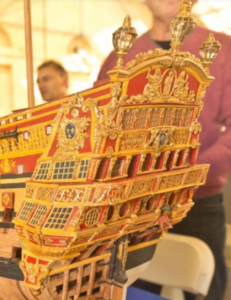 Here we can see the four instead of two gunports for the 36polounders under the transom and a pair of 24pounders integrated into the transom - nearly comoflaged in the structure. 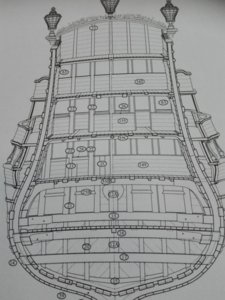 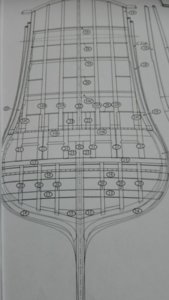 the slim timbers already holding the mass of decorational carvings and glass and balconies and columns. But as I told I will go deeper into this matter later on.

In a first step there are serious alternation between the plan of the transom balkonies and the Ancre solution (here shown in a scetch a cut along the center line) : 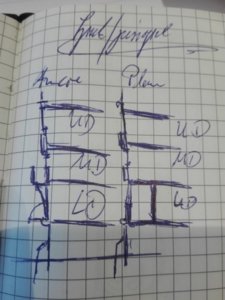 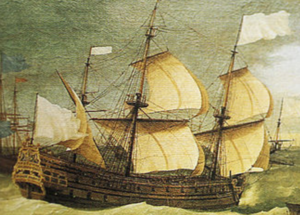 This painting shall show SP, twoo - but with one floor and row of windows less.

Even at Rif Winfield important book FRENCH WARSHIPS IN THE AGR OF SAIL 1626-1786 we do not get any proper answers to those questions. 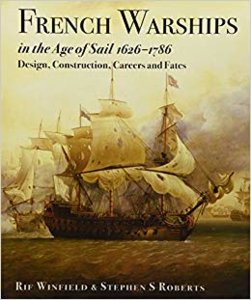 And this contemporary painting of the battle of Malaga is a kind of bad if not dirty joke: 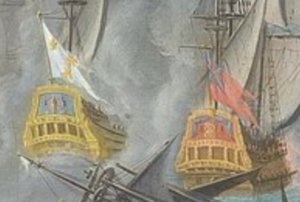 So there are a lot if doubts due to the transom's reconstruction. I my point of view Ancre pressed the reconstruction into a 90 barrels on carriages wearing hull - let's call them "counting guns" 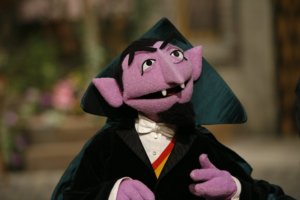 not thinking about the swivel guns that may be in charge, too. But I am not in the situation to handle this case properly at the moment.

So what did I do yesterday? I paid nearly the price for the monograph again spent into ink plotter print outs in 1/64. And I have to admit that some of the plates are wrongly named due to the scale! (Keep this in mind when resize your plans!)

So the resulting hull is a beast of a ship still 1/4 smaller than the original plan - she will be fully rigged nearly four French feet long.

And is a beauty also as a hull model:

Here compared to the Heller hull I do transfer from SOLEIL ROYAL to SP:

Changing the scale to 1/92 so the hull fits better.

But st the very end the model will be a fully rigged one: 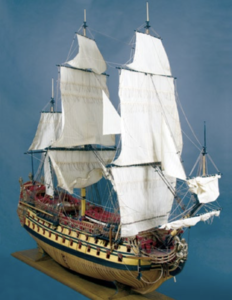 Myfirst step is to build a cardboardmodel for the first impression of the size and to get a feeling for the hill's shape. Let us call it a rough 3D-scretch to play with in the flat due to find a place for the proper model. So tomorrow I will reenter the Copyshop with the needed plans to get my working copies and cutout paper to be glued on the cardboards.

Hopefully you like this limited project as I will build it PoB due to my workshops limitations.

Thanks for your interest.

Interesting ,I will follow this project with great interest.

Thanks a lot zoly - as with our 1/48 project we do find errors so the progress will be quite slwoly as it is bound to the 1/92 plastic bashing of Heller's SOLEIL ROYAL and the first is a cardboard test build. So please do not expect too much from me) as I am also with only one eye that does not work very well.)

Let's hide this in the wise sent nce:
Patience and precision is the model builders best friend

I am taking an empty seat and will watch with huge interest! Keep your progress steady, please!

Fabulous!There were no online builds of this magnificent ship anywhere,now we have three on SOSBrilliant stuff,I look forward to following your work and I am interested in your chosen direction as to the stern.

I look forward to building this beautiful ship. I will honestly watch!! FireFireOndras

Great Great Great
I am so glad you decided to start this log and I am very happy that you show us and share with us also your thoughts and research work.
I will follow your log (and everything else) with big interest.
For everybody interested in the basic planset iterum is using - here you can find the planset review:

Planset Review: Monographie: SAINT PHILIPPE (1693 - 1715) - 90 gun built by Francois Coulomb at Toulon by Jean-Claude LEMINEUR in scale 1:48 Translated by François Fougerat many thanks to Didier Berti who made this Review possible ! This monographie is available from ancre in different...
shipsofscale.com 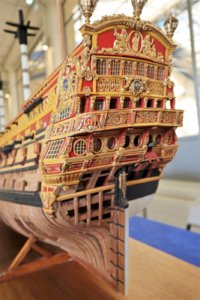 Hello and thanks for your interest...
Single Malt or

I am on my way back from the local copyshop payed 290 bucks in the last three days for large format ink copies spending four hours in there?!

So I'll this evening cut out my bulkhead paper copies - adding the CWL and the decks and name them.

So there will be little to see today.

As I told you not really very much happened today, I just decorated the 1/64 printout in the living room:

And then I started to set the CWL/L. . in every bulkheads print out and didn't find my two big triangle rulers so I only managed to draw the L. F. in an acceptable quality on the main bulkhead - M. G. M.:

This from
here
now
& me

Good night all together,
Heinrich

Exciting building you have started, I want to follow, greeting one of the metric guys.

I have seen the Russian videos about hull constrution and symetytests and are following this path throu out the next days. Here my first pair of compasses test to symmetry for the Ar-bulkheads:

If the line meets the crossing twice exactly on starboard

than my copy is exactly right done...

"Constructing is always and in anyway much more exactly than measuring."

And by this I pointed out the line of I Ar.
by a yellow aquarell pencil and was able to lay the L.F.

at portside, too - so the big question is if it is rectangular to the CL?

Norway said:
Exciting building you have started, I want to follow, greeting one of the metric guys.
Click to expand...

Great to see you in the scrum, Norway!
Let's run completely mad the rest of SOS-team and us going the ultraconservative way by using contemporary French Royal Feet 324,8mm...

Wow... I cannot imagine it... But am coming to an end if drawing L.F./CWLs for today. I am really through it!

I managed to set all the L.F. lines horizontally and had proven the plan copy to ve symmetrical:

So at starboard the line meets not 100% exactly but in a tolerable way of being exactly in less than 1/10 of a millimeter:

And on the port side it does work much better:

So I added the L.F. to every Av. bulkhead and

just got in trouble with the naming of the forecasted former's lines - as the "mix up" and seperate again - but what line belongs to what former?

I am not absolutely sure I have done it right. So I have to recheck that on tomorrow. Has any of my other SP-building colleagues some helpful hint to me?

Thanks for your interest.

Why are you not using the individual frames to get the bulkheads?

zoly99sask said:
Why are you not using the individual frames to get the bulkheads?
Click to expand...

No Zoly I do cut out the bulkhead drawings as by this I do get the full middlelines and coordinates within. But you are right - the formers give the beavel, too.(But copying these down to 75% would cost nearly 70 bucks on top.)

let's figure out real errors:
I layed at LF of
Plate1 the lower half of Plate 2 on it at MGM as the very good fixing piont.

COL is shifted 4mm towards the STEM!

Even the complete STEM is dis-placed:

So What can I do about this mess?

My logical idea was to cut out the water lines some 10mm deep and place them between the bulkheads to preform a good shape of the hull and to get the bulkheads fixed not only by softwood to be planned into shape. So instead it should show a twin effect :
The right distance is kept and the shape of the hull at this certain area of the hull should be given by the same pice of wood.
Is this not possible as with cardboard models (where I have stolen my idea from)?

Heinrich,I cannot really pass comment as to the discrepancies you have found.I haven't even looked at the "waterlines" plan sheet.I have used the sections of each frame and the framing plan sheet number 15.Are the drawings incorrect or is it an error with the copying?

When I was trying to understand how JCL had drawn the hawse timbers I had massive head scratching for a few days.It became apparent that the plan was taken parallel to the keel not the waterline.The keel slopes but the frames are plumb when in the water.I would have thought it would be parallel to LF but is wasn't.This made a big difference to where things worked out.


Yes Nigel that is totally clear due to the bent L.F. in the formers drawing.
The Bulkheads are rectangular towards the CWL not the keel - here the MGM frame MGM (orange) against the L.F. (blue):

And let's double check the former Ar.V and the keel:

But at an top projection from ahead of the deck - the former's lines will be drawn in the L. F. or under the keel. But I am in the project of checking the deck plans plate 25 to plate31 and the difference seems to appeare between decks and furnitured decks ...

It is not the very end of the diagnosing but my first idea of horror.

Is it dossible the Lamoneur changed the layer between in L. F. and parallel to keel?

At COL we do get this:

If the change the basis from rectangular to the L.F. towards rectengular to the keel er get a 2,xy mm distance - when our pivot axle is on COL. It we pivot around the point L.F./M.G.M. the way of shifting will be much more.
So our poisoned question is what is the projections basis the lines are rectangular to?

If this changes from drawing to drawing get proofed reality it is a pure horrific nightmare.

Heinrich I don't know.I am very wary of any drawings that are possibly derived from CAD.I have many experiences in my day job with so called "true Views" which are not that.Typically the CAD operator had clicked on two points for a datum for the projection but sometimes these are wrong.I had many a heated debate with the CAD operator that his drawing was wrong and an explanation from myself looking and pointing at the 3D model on the screen sorted the issue and a new view was produced.
Unfortunately this is not a possibility with these monographs,we can only try to relate to what information is shown.

Iterum said:
Geometric discussion in English - no English teacher ever prepared me to this...
Click to expand...