Nice build Donnie. I read the whole blog and will follow.

Thank you for your interest. My first scratch build so there are many errors and problems to overcome.

Hello Donnie. For the first-time scratch building you are doing an awesome job!!!

Thank you all for the compliments. Well, I am staring where I left off. Been on a short vacation, trying to get acclimated back to office work again, plus other life situations, and trying to get back into a track again.

Now, I am working on the upper main deck and this is where I am with it all right now. I am pressing onward to finish this thing. I want to work on other projects. 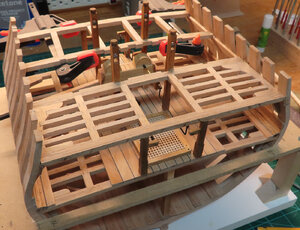 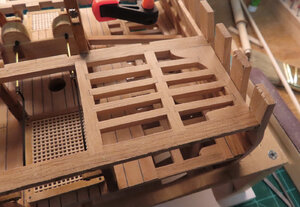 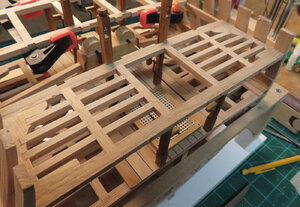 thank you for the likes and kind words. I have not worked much on the x section in a while. Just too much other stuff going on. Boss changes, work-life changes, and other worries seem to dominate my life lately. But, I have made a little more progress - pictures are not that great but I had to get those online quickly. 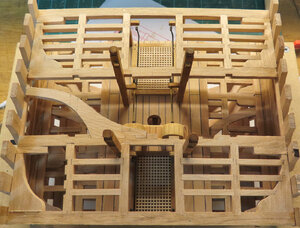 Clean work on the joints. This will be a nice model. I was thinking to build this cross section too in the future and the build logs are a nice reference

Donnie,
I read your blog and the photos you attached , this is very nice & impressive models, Well done. I learned a lot from your working methods

thank you shota and others,,,all again for the kind words and likes.

The latest - just making more beams / joints etc. After which I will start on the Elm Tree Pumps. There are some knees that are missing that I must get around too as well. 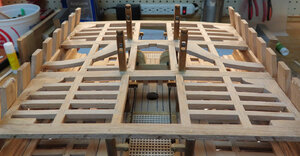 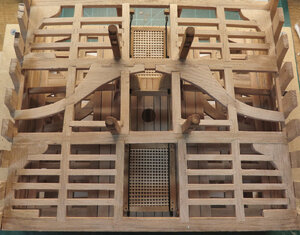 Elm Tree Pumps - not fancy - just enough to get the job done. I used what is called a bread and butter style to make the pump handle supports. The pump ends are sanded to a 3 ° angle. (or 87 °) offset. 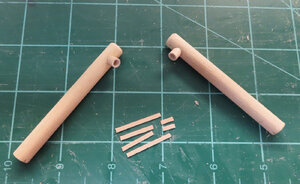 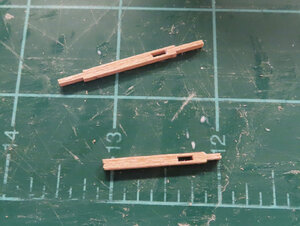 Hi Donnie, you are making good progress. Is the 87-degree offset at the pump outlet? It looks like the ends are at 45 degrees.

First, I removed the last photo as the pump handle supports are mounted opposite of the outlet ports. They have been repositioned.
MIke, I have to investigate and try to understand your comment. At first, I was thinking you were talking about the angle of the entire pump itself. The entire pump as you know does not mount straight up and down at 90 degrees but has a slight angle to it. I just chose 87 degrees as it looks more realistic. Then I thought you were referring to the pumps OUTLET. THe outlets are mounted 90 degrees to the main pump shaft.
I did make a mistake and I mounted the handle MOUNTS opposite of the OUTLET and I have already corrected that and I have one main pump mounted. I will have a pic of that coming soon.

Hi Donnie, I was looking at the top of the pump bodies in post #390, it looks like they have a bevel of more than 3 degrees. My bad lol. The 3-degree vertical angle will work well for your pumps. Do you think they hooked up a hose to the pump or let the water run across the deck to the scuppers?

Finally got some shots of one complete pump. It is simple and basic - no frills. The first picture should show the angle I used. 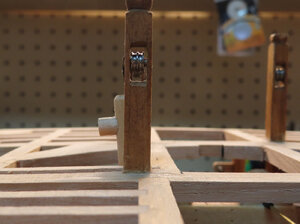 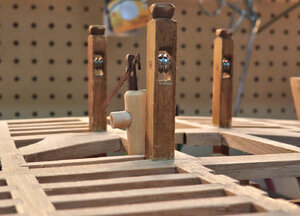 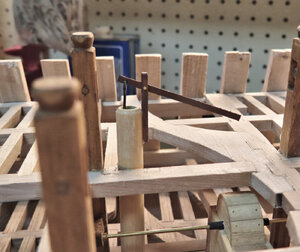 Donnie said:
The latest - just making more beams / joints etc. After which I will start on the Elm Tree Pumps. There are some knees that are missing that I must get around too as well.

Hi Donnie, very nice joints you are making, one would never know that this is your first scratch build.
Regards Lawrence

Thank you Lawrence. It is going along a little better than I thought. But I must pay special appreciation for those that built this before me that I read a lot of their logs before hand. Including good power tools also helps produce good results. However there are a lot of mistakes that I had to redo that I rarely posted about. I do know that a power disk sander can be both a friend and enemy at the same time. I ruined many parts on the disk sander. My next purchase is going to have to be a VariAC controller to get the RPM down on it.

From what I have read in another build log Elm Tree pumps were to pump water on deck to clean and flush deck after getting messy! Some ships may have hoses for use in fire suppression but not common!

The latest. Not much to show other than all of the left side of upper deck framing is complete and I have just a little on the right side to finish up the framing. 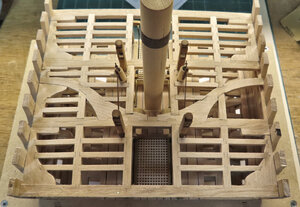