The foremast was glued in place in the forecastle. The mast alignment jig was used to make sure it was vertical. A 6" long liquid carpenter's level was used to make sure that the hull was perfectly level. A piece of a drill bit was used as a pin for the mast, but before the drill bit was broken to obtain the shank for the pin, the bit was inserted into the hole drilled into the bottom of the foremast. The angle of the drill bit in the mast was checked by turning the mast in my fingers with the tip of the bot on the table. Any misalignment was corrected and the bit was glued temporarily into the end of the mast. The mast itself was then used to drill the hole in the upper deck (which is below the forecastle deck) using the bit while ensuring the mast was vertical. Certainly there are easier ways to step the mast into place, but this was quick, and after applying PVA glue to the bottom of the mast, the pin ensured that the alignment of the mast was good. A final check was made with the alignment jig, and the lowest section of the foremast lined up perfectly with the string of the plumb bob.

Using thin pieces of shaved wood, chocks were added to the surface of the bowsprit behind the collars for the blocks installed earlier. This was a small detail, but every detail counts when the model is finished.

All the 7mm deadeyes were stained with Danish Oil (Walnut). A couple of the 7mm deadeyes and chain plates were made as a start to preparing the chainwales for rigging of the shrouds. The new chain plate sets from Model Expo were used instead of the simplified ones supplied by Corel in the kit. The brass wire surrounding the deadeye was round, and this portion of the wire was straightened, then reshaped into the triangle to hold the 7mm triangular deadeye reshaped earlier. The lower chain plate double eyed link and the copper flat plate were assembled onto the upper chain which holds the deadeye. Before the wood deadeye was inserted and the wire closed around it, the chain plate assembly was blackened with brass blackening solution. At the bottom of the deadeye, the ends of the wire are butted, but but soldered. I know it's a better practice to solder the connection, but the break in the wire is too close to the wood in this design, and soldering would char the wood, and leave a silver shiny spot that requires painting later. The wire appears to be stiff enough to take the stress of the shroud tension without bending the deadeye loop open. The open wire joint will be hidden fairly well between the deadeye and the chainwale, and any gap can be filled with a touch of glue and paint. 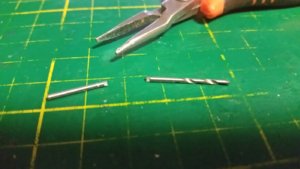 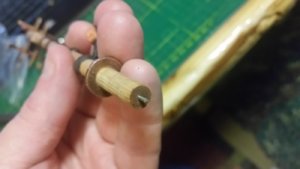 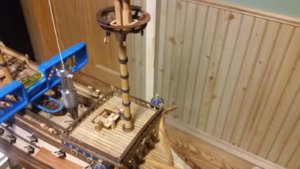 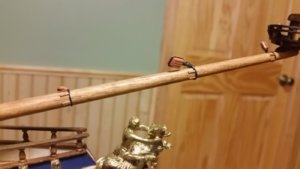 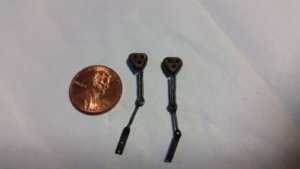 Amati chainplate assemblies will be used instead of the Corel ones. Some of the chainplate assemblies were made and the foremast chainwales were marked using a temporary false shroud line. Notches were cut in the chainwales with a Dremel tool and cutting wheel, then filed to final depth and shape to accept the chainplates on both sides of the hull for the foremast. The chainplate assembles were blackened in a glass bowl, then small needle nose pliers are used to bend the chainplate parts to place the deadeye in the correct angle at the top, and form to fit the wale on the hull at the bottom. The ship hull was tipped in its side to allow me to work easier. Two back pins were used to nail the bottom of the chain plate to the wale and hull. The upper pin was installed first, being held with pliers in my left had while a tack hammer was used to tap the pin into the hull with my right hand. The final taps were made with the jaws of the pliers touch the pin head to set the pin all the way in. Since all this fitting and working rubbed some of the blackening off the chainplates, they were painted black with a small brush once they were installed. More chainplate assemblies need to be prepared and installed next, after which a strip of walnut will be used to cover the the outboard edge of the chainwales. 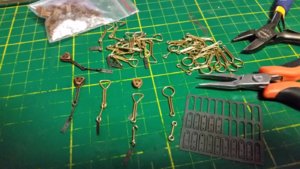 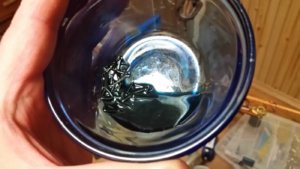 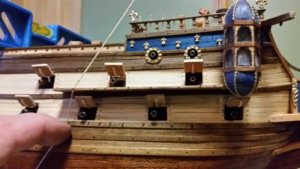 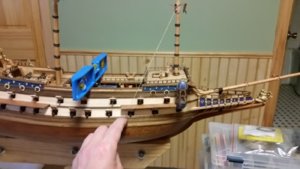 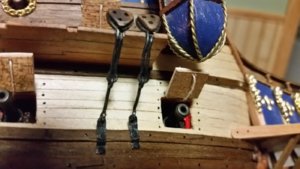 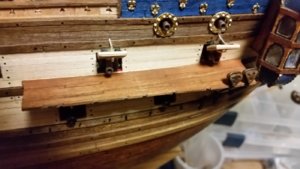 Chainplates and chainwale trim are completed on the starboard side for the foremast. 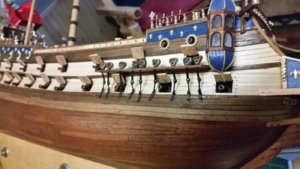 Port side chainplates are complete for the foremast shrouds. Note that the dog bone piece of each chainplate has to be resized so that the anchoring part at the bottom rests on the wale. Small round jawed need nose pliers are used to reform some of the dog bones to make them shorter as necessary. The loose chainplates that appear out of aligniment at this point will pull taut once the shrouds are installed. That way each chainplate will be aligned perfectly with the axis of each shroud respectively. It was tricky relocating the chainplates and chainwales such that nothing will interfere with the line of sight of any of the guns. However, relocating the chainwales is a more accurate feature for many ships of the early 1600's. Mantua's La Couronne is built this way, but Corel's is not. I prefer the Corel stern design over Mantua's because the height is more realistic and not derived from an artist's woodcut or painting, which often tends to romanticize the sheer curvature and stern gallery height to an impractical extreme. 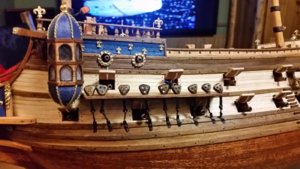 In preparation for installing the main mast shrouds, the main mast was pinned and glued into place. The plumb bob jig was used to make sure it is lined up with the foremast, vertical but with about 3-4 degrees rear rake angle. More nailheads were painted onto the tops, topmast cheeks and topgallant cheeks. After the glue for the mast started to get firm, the mast cover was let slip down the mast and glued to the deck. The mast cover is what covers the mast wedges that anchor into position in the upper deck. 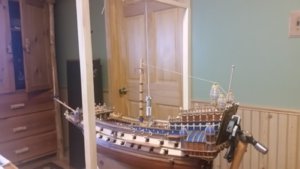 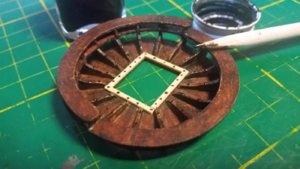 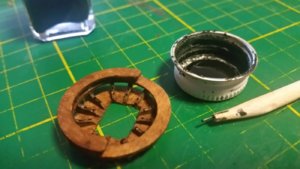 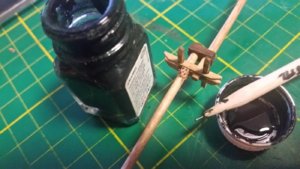 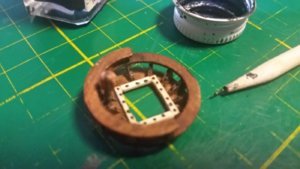 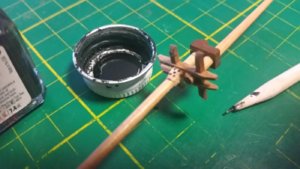 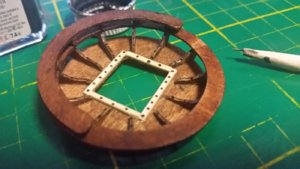 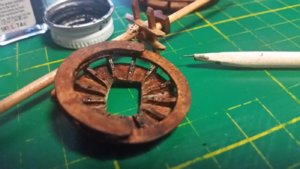 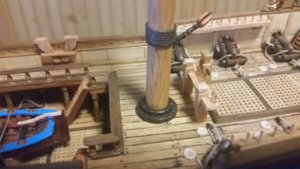