do they have extra parts for the cannon carriages.old one didn't have the blocks for the wheel carriages

Ok, let me see if I can answer this. Yes, my model is the art 747 and this is the start build date of November 14, 2016. So this model is from this particular era of production. Now, I do not know when this box was actually put together with the contents.

1) No plastic parts in this kit. All metal parts such as cannon barrels, the ornamentation on the stern, and figurehead all metal. Upper Deck Canon Port openings on main deck all metal. the other cannon port lids for lower decks all fabricated out of wood. All stern parts are mostly metal. In other words, as I said are NO plastic parts
2) No rigging blocks for the Cannon Carriages. I did not do this as the scale just too small. I would have had to order smaller blocks in the 1mm x 1mm or less in size to make the scale seem more realistic. to me, it is best to go without blocks on carriages rather than load up all the carriages with blocks too large as it really takes away the look.

Note: the MAIN deck had to be lowered (if I remember about 3mm) so that Cannon Carriages would sit on deck correctly. I have seen several models of this era that they modelers had to either remove the Carriage Wheels or make their own carriages because the deck is too high. The cannons will not even enter the Port Frame openings. I found this out before going further. You will see this in my log early on.

If I am following you right, you already have in your possession the art 747 Panart kit but it is from a long time ago. Is this correct? If so, then the Cannon Carriage placement issue with deck too high might not be an issue at that time.

To add more to this situation, if I had known more, I would have purchased my San Felipe from the ZHL model - their version of the San Felipe is so much better. The Panart was terrible. At first, I was very impressed with the amount of laser cut parts and all the fittings. But, it wasn't until actual construction that I ran into problem after problems.

If I can help you in any way - please let me know. I hope that I have answered your questions.

Donnie said:
So, I was making an attempt to reproduce what you see in this image I have attached. Each line (on each side) happens to wrap twice around and it is not a very good job.
This, as you know, is in simple terms a Yard Sling. Some slings have pulleys and some do not. While some are even more elaborate with double blocks. The two lines (one on each side) terminate at the bitt rails (located at the base of Mast).

I have in my database a complete way to build San Felipe, with maybe 200 or more images. No Plastic part etc. It could be from one of the Spanish manufacturers. avoid plastic part and if needed build your own gun carriage. Here in Span, you can buy all these accessories by bulk. http://www.hobbiesguinea.es/es/
T

tried to contact cornwell but they never contactact me back can you give me their e mail address. thanks terry
T

hi donnie. do you know if cornwall have cannon kits for the san filippe? i would like to buy some for my model. all i have seen are cannon kits with out the blocking that hold the wheels. if not do you know where i can buy these? regards terry

Terry,
No luck with Cornwall Model - try this link for Model Expo as they have several sizes to choose from - wooden parts/kits - fittings. Since the carriages are made of wood, you can drill your own holes to mount the ring-bolts for your carriage rigging. I had bought several to test to see if I wanted to use them on my Santisima Trinidad, but I changed my mind. Here is the link to fittings: https://modelexpo-online.com/Cannons_c_68-2.html

This is an image taken from my Trinidad log showing the carriages from Model Shipways (Model Expo) Probably, the MS0662 will be more to accurate size - You might have to contact M.E. to see if they still carry it. eBay might have this as I was searching there.

Then lastly, I found this on ebay with a 38mm cannon-carriage kit. 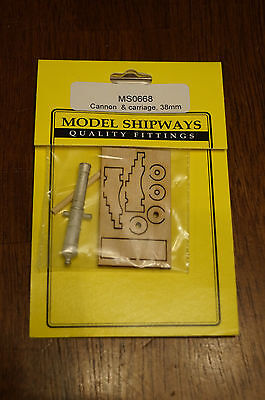 Find many great new & used options and get the best deals for Model Shipways MS0668 Cannon & Carriage 38mm at the best online prices at eBay! Free shipping for many products!
www.ebay.com

The assumption is that the dimension of f.e. 38mm is the cannon barrel lengh and NOT the carriage length. 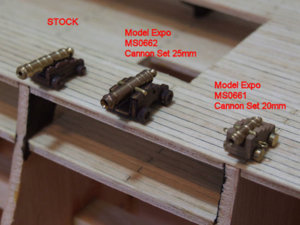 Gary,
I'm currently finishing my first model ship "The Snake" and was amazed by the craftsman ship you put into your model and it was the inspiration for me to join this group. Just recently I purchased the PANART HMS Victory and the Sergal Sovereign of The Seas models and am looking forward to viewing your build as I begin sometime this summer

Hello @RZ Flyer , we would love to you see The Snake in your build log on SOS. Is it Possible, what do you think?

Hi @RZ Flyer
thank you for the compliments. Please start a build log of these ships.

Hello Donnie,
I kind of need some guidance on the practice of generating a build log. I have an idea but would like some pointers. And yes, I have some good photos to upload here shortly. Yesterday was the first time I was able to return to the build due to many priority projects on the burner. I was up at 5:00 AM to review preps for the yards. ( basically the last of what needs to be finished) And of course it was like an exciting return home to roost. I am currently building a gothic shaped roof on a new storage building to provide room for extraneous items crowding my existing shop area. It is something I have always wanted to build and am finding it to be a fun challenge.

Hello Jim,
Thank you for the interest and I will upload some pics as mentioned above.

What brand jig saw is in the pictues?


Here is what I started. 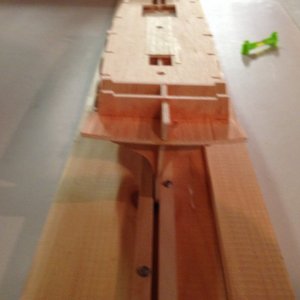 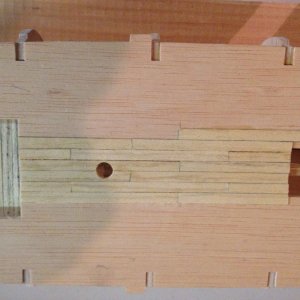 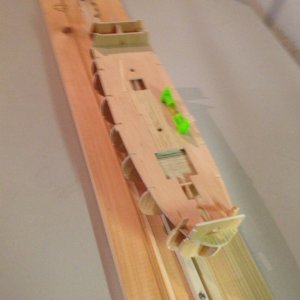 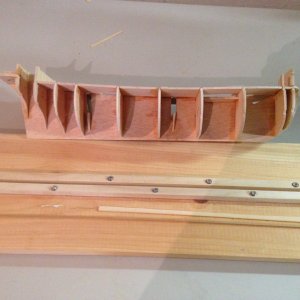 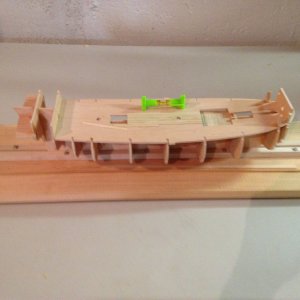 It is a Ryobi. By the way, I need to move your post at some point into your own personal build log.
kindly
Donald

Proud tower, I assume that by your question - are you referring to some saw that I used on the Panart Build log? I am not sure - since this is the only question and no other references, I can only assume this is what you need. I have many saws that I use. Do you mean Scroll Saw, Table Saw, hand saw? Can you be more specific?

Here are some video tutorials how to use the forum ,srart a build log,post images

Very Nice Build Pleasure to look at...Followed your log and made note of the issues you have had with this kit. I have this kit and will be building it in the future but will have sails. Thanks for your explanations and solutions to the problems found
You must log in or register to reply here.
Share:
Facebook Twitter Reddit Pinterest Tumblr Email Link
Top