going strictly by the Alfred drawing it does not show a door only windows and here is my theory
take a look at a wall with a door, in order to have a door that opens and closes there has to be a door frame (tinted green). That frame takes up space so the actual windows in the door is smaller than the other windows, same height but narrower . 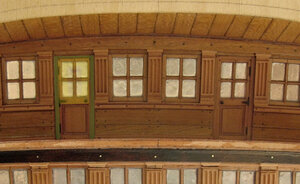 looking at the actual drawing of the Alfred notice all the windows are the same size. The draftsman who did this drawing did not have a door in mind when he drew the windows. There can not be a door on either end of the line of windows because there is no room, look back at my drawing the wall goes from one side of the hull to the other.
Now we can consider the draftsman made a mistake but that is unlikely, maybe a window was reworked as a door as the ship was built which might be possible.

When Harold built his model he interpreted the wall as all windows or "as drawn" on the original plan. What also influenced his decision are the doors ways at the side of the hull. 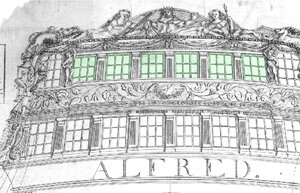 if there was no way to walk out to the balcony i would question the all window idea. But look at the right side of the picture right at the end of the balcony there is a door way. 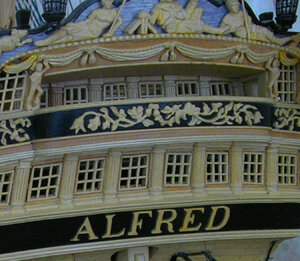 This seems to the way the french 74 is set up..... and it would make perfect sense in your case as well.
I know, this is for Alfred not some French 74.... but it is along the lines to what Gary is suggesting and he seems to have drawings and information to back this up: especially in regards to doors to access the gallery from the stateroom and "bathroom" space in the upper level of the quarter galleries.

Gary. If you have the 74 gun ship, look at Volume 2, plate XXV for the upper deck level layout and page 81 for the quarterdeck layout.

Gary makes a strong case for adding door in the wall no doubt about it.


The quarter galleries are tight spaces, so limited to likely just enough room for a wash-sink and officer's seat of ease. 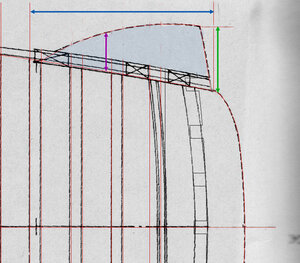 I started this project as nothing more than an exercise in creating a 3D model of a stern section using the drawings of Harold Hahn.

When Harold created his drawings and model collection he was trying to create a system for the average model builder to be able to successfully build a plank on frame model. Needless to say he simplified various construction details.

Harold was doing a balancing act between historical correctness and the hobby. By no means was he a slacker suggested by certain groups in this hobby who nit picked his work to death, his personal library and research material filled rooms in volume. He vacationed with the likes of Howard Chapelle in Howards summer home. Harold made several trips to England to do research at the Maritime museum.

Recreating his work was more of a tribute to someone who has done more for this hobby than anyone. another reason to be faithful to Harold's drawings is a copyright issue. All plans held by the Maritime museum have a copyright and they can not be used in any way shape or form without obtaining a license should this project advance to a kit. However Harold did jump through all the hoops and obtained proper permission and as a result developed his plans, articles and models which all have a copyright. I have had for many years worked with Harold and I do have permission to use his work. for me to start from scratch I would have to go through the process of obtaining museum permission.

so now like Harold I too find myself doing a balancing act between being faithful to the work of Harold Hahn and making corrections and not over stepping the boundaries of the museums copyrights.

with this being said I will indeed include alternatives like adding doors where Harold did not. Should this turn into a kit then YOU as the builder can make the modifications.

as Harold said to me before he walked away from the hobby. "all these so called experts who claim how this or that was done have no clue what they are talking about simply because there is no documentation one way or the other. It all come down to an educated guess and nothing more besides its just a hobby."

garyshipwright said:
Ok Dave I catch you drift. sorry didn't mean to sound like a experts. Gary
Click to expand...

Gary and Gills I respect your input on the subject and like Hahn I do respect and hold in high regards both your opinions and comments on the subject. The post was not intended to take a jab at you or for that matter anyone, well except those who thought they were the gods of the hobby and ran Hahn out years ago.

The post was to show the intent of the project and the boundaries which i have to work in.

For sure i will do a drawing with doors and windows because just maybe that is how the Alfred was built.

Hi Dave,
I'm following along with great interest and have started my own Alfred 74.
Do you have reverend Romero's 6 volume set of the Warrior practicum ? He details and tweaks Harold Hahns plans and respectfully adds to Harolds fabulous work. 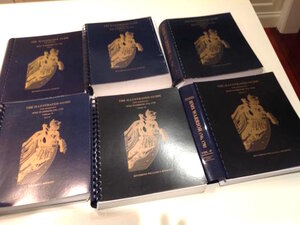 very interesting post Gary
and it shows what Hahn said years ago about self proclaimed "experts" Bill Romero actually knew very little about ship building he was bluffing his way through it. To say he was a good model builder that goes without saying, he is or was.
It was Harold Hahn who lit the fire on historical accuracy and building as a fun hobby and everything in between. It all started with his little people the gods in the hobby just did not like it and ended up picking Harold's work apart piece by piece until he had enough of it and walked away.

this topic will show how 3D modeling is applied and how cutting files are created it is also evolving into researching and arriving at your own conclusions and how you want to build your version of a subject.
I love the idea to debate various issues which were often censored within the ranks of different groups within the hobby. A lively and open debate sheds light and that is how it should be.

you will soon be seeing the excellent 3D modeling of Mohamed who did the modeling of the gothic steam engine( link below) if you want to see Mohamed's work and is now part of the Alfred team.

hello Dave hey dude where are the freaking doors in the wall?
Harold did not put doors in the wall
well he should have
oh ya who says?
my research says so
you may be right BUT I am 3d modeling Harold alfred

Thanks for your observations on reverend Romero's practicum Gary. I am half way through the Alfred build but haven't started a build log yet.
I am mostly following Hahns plans in 1/64 scale, and use Romero's books for a reference with the small details. This is a most interesting topic gentlemen, so please continue with the research.
thank you Brian.

Brian077 said:
Thanks for your observations on reverend Romero's practicum Gary. I am half way through the Alfred build but haven't started a build log yet.
I am mostly following Hahns plans in 1/64 scale, and use Romero's books for a reference with the small details. This is a most interesting topic gentlemen, so please continue with the research.
thank you Brian.
Click to expand...

Hello Brian,what is the hold up with the build log?

Ha, I thought you would pick up on that Zoly.

Brian077 said:
Ha, I thought you would pick up on that Zoly.
Click to expand...

Brian077 said:
Ha, I thought you would pick up on that Zoly.
Click to expand...

Gary and Dave,
been pouring over the Alfred plans but cannot find any details about the decorations down the sides of the ship. Reverend Romero goes into great detail about the painted frieze on Warrior, but I assume they would be slightly different from the Alfred.
Any photos or diagrams would be greatly appreciated. thank you.

Brian077 said:
Gary and Dave,
been pouring over the Alfred plans but cannot find any details about the decorations down the sides of the ship. Reverend Romero goes into great detail about the painted frieze on Warrior, but I assume they would be slightly different from the Alfred.
Any photos or diagrams would be greatly appreciated. thank you.

I will check what I have Gary might have more details

there seems to not be much posts last week or so but i an still working on drawings of the stern i finished the stern windows. You don't see the windows in the center because they are not part of the stern construction. 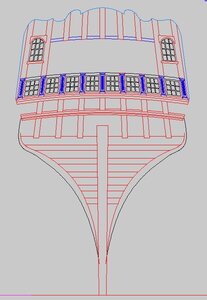 taking a closer look I had to draw the windows and pillars. Each and every window fits in its own location from the center outwards the windows change angle. 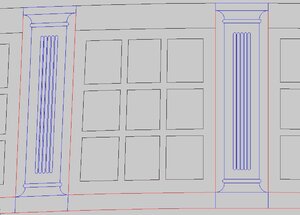 this stern project is part of the international outreach program to work with international people and businesses.
I just got word the 3D modeling is moving along and I should be able to post some results in the near future.

Gary is correct Hahn stained the section of the hull blue

i do not have the original museum plans so i do not know if there was anything on them.

either do what Hahn did or maybe Gary has some examples you can look at. 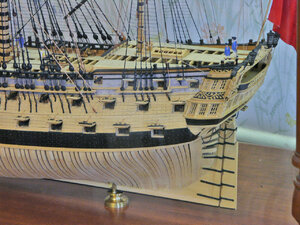 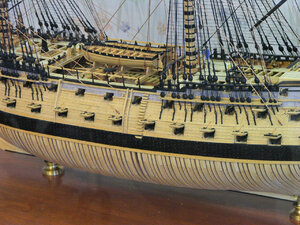 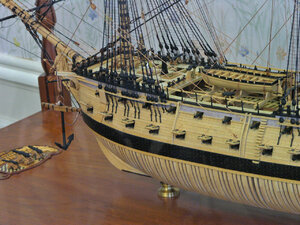 maybe Hahn knew there was something painted on the side of the hull but there is no way of knowing what it was so he just suggested the idea with a basic blue.