Nice job Chris! Where did you find your alligator clip holders?

dockattner said:
Great painting Chris! I understand the challenge well. You did a wonderful job!
Click to expand...

I’ve got a new set of head mounted magnifying lenses with LED light that certainly helps and some very small brushes. 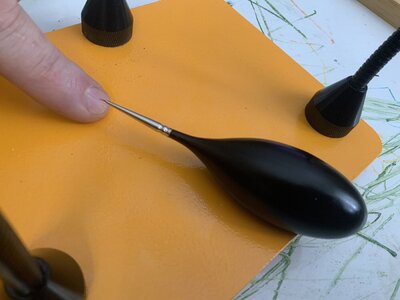 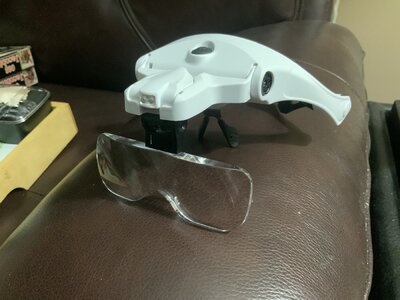 This is the tartan I need to paint on the Scotts. 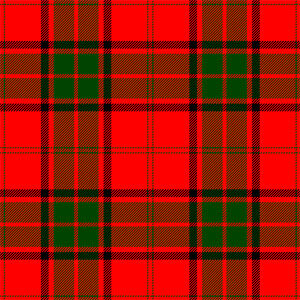 Daniel20 said:
Nice job Chris! Where did you find your alligator clip holders?
Click to expand...

I found them on Amazon, I posted a link somewhere? There are made by Kotto, they have several versions available.

Daniel20 said:
Where did you find your alligator clip holders?
Click to expand...

Hello Daniel,
The clips are part of the soldering station. They come in a variety of different combinations and setups. Below is the example

Jimsky said:
Hello Daniel,
The clips are part of the soldering station. They come in a variety of different combinations and setups. Below is the example

The ones I ordered were the same price but came with 4 holders and are made by Kotto.

So here I am diligently trying to paint these teeny tiny figures. The Admiral took this 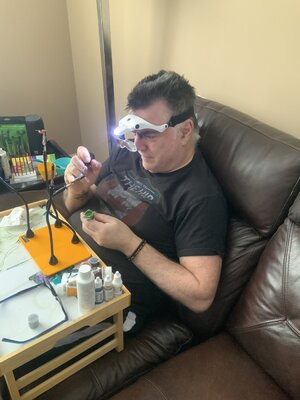 Here is what the diorama in the Great Cabbin will look like. I still need to add some charts, a bottle, a globe on a stand, art, and a chair or two. I will also be removing the plastic under their feet. 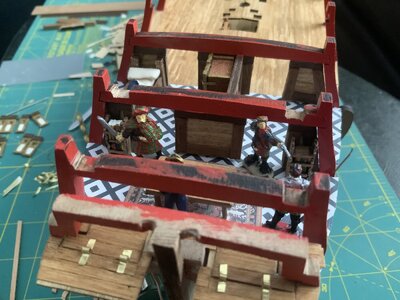 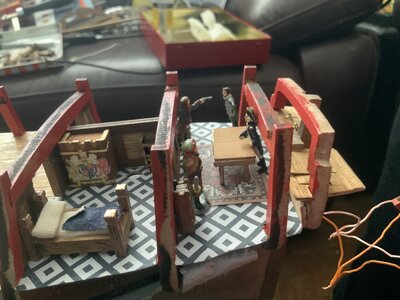 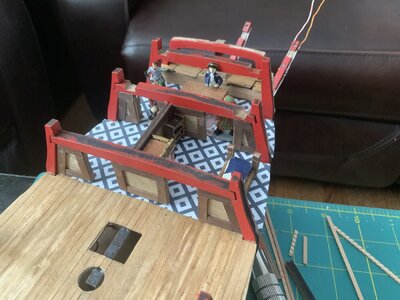 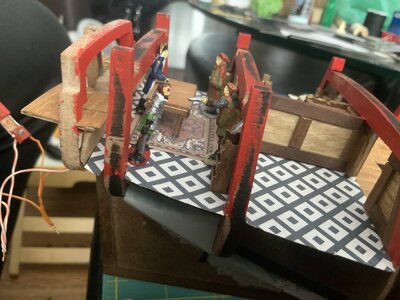 they comes under all kind of names and numbers of different combinations (two hands, 4 hands 2 short 2 long .. you name it!!!!), this is why the price is varying.

Jimsky said:
Hello Daniel,
The clips are part of the soldering station. They come in a variety of different combinations and setups. Below is the example

TechTrek said:
The ones I ordered were the same price but came with 4 holders and are made by Kotto.
Click to expand...

Thank you both for the link.
Just when I think I might have all the neat tools I might need, along comes something else it seams I can't do without.

Here I’ve dropped in the LED lights for the main cabin area. The doors have been added.I’ve also printed some more items to add additional details. These pics are of things you might find in the cabins of the Commander. I slipped in a few family heirloom pics, the silver dueling pistols were worn by Bonnie Prince Charlie at the battle of Culloden, the other pistols were also his. Bottom centre portrait is him, middle far right is his Father King James. 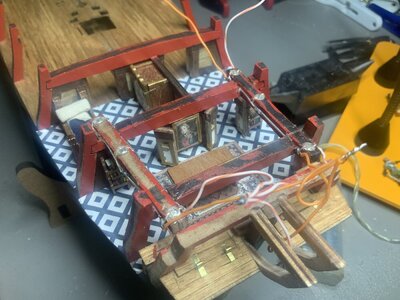 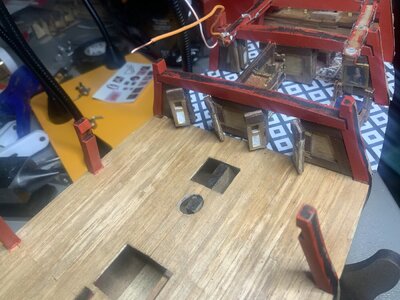 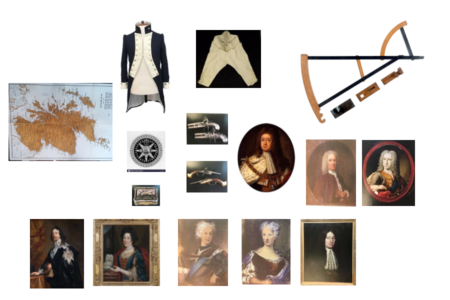 I used my Sprocket printer as it prints peel and stick images. 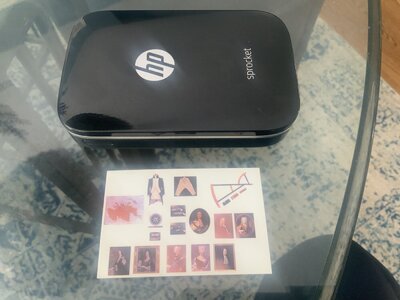 I’ve started on the two chairs I will be placing in the great cabin. Here are the chair pieces. 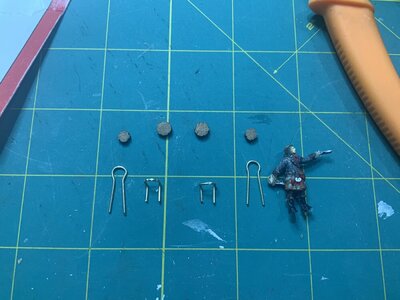 The brass wire pieces are soldered together and the wood seat and back added. 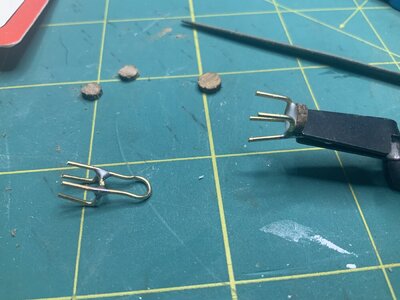 The pieces have been glued and need to set before I do the final sanding and shaping before painting and staining. 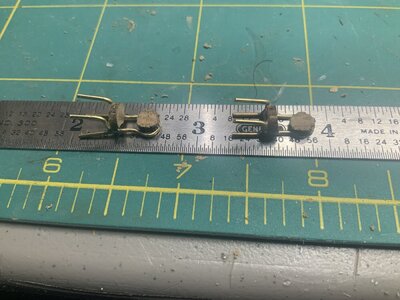 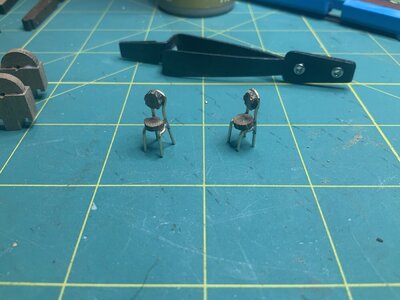 If you can dream it you can make it. You have a fantastic imagination. Can't Waite to see what comes next.

Thanks, they look kind of crappy now but will look much better when finished.

Full belief in you Chris! Make it work!

So I have a question, which chair left or right? These aren’t the final finished versions but I’m trying to decide if I like the simulated buttons on the cushion or not. Please let me know which you prefer. 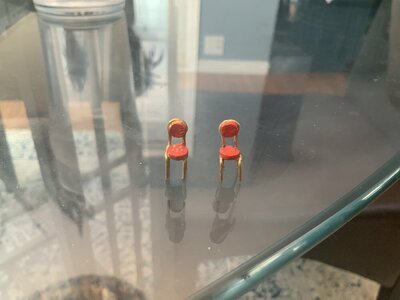 Hello Chris, I like the idea of simulated buttons but...the way they are now like spots. The actual buttons are the nails, when you push the nail down is takes surrounded fabric and creates deepening (sorry, with my broken English) I hope you get an idea. Take a small round bur and make just a touch spots where nails will be imitating. Experiment until you will satisfy...

So here are the simulated button chairs. I might repaint again as I’m still not happy but they’re so small it’s hard to hit the right spot exactly right and leave a small blob without pressing too much and spreading it out. 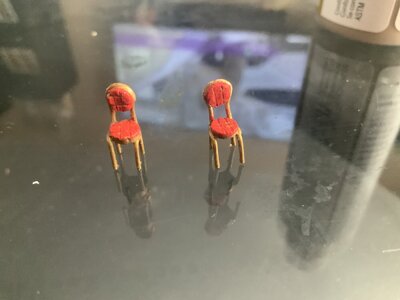 Final version, better but still not perfect. Since they’re just laying tipped over on the floor I will have to be satisfied now. 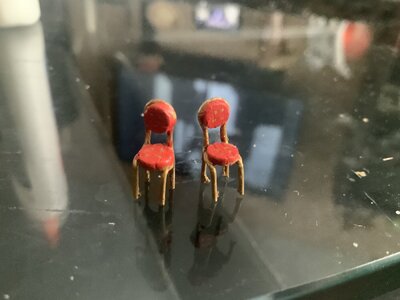 TechTrek said:
Oh Happy Day!!! I am finally starting to put in place the pieces to begin this adventure in ship building and honouring my family history. I have mentioned in other logs that I was planning on doing a build based on a family historical event. As most historical events passed on through the family, this one is a bit murky but there is enough information available that I can put together the pieces.
The family story is that following the 1st Scottish rebellion many Scotts were upset and looking to leave Scotland for greener pastures. Most booked passage and landed in many places around the world. One group of my clansmen happened upon a British 6th Rate ship that happened to be at anchor off the coast with a minimal crew aboard as the bulk of the troops were raiding the local population. The typical raping, pillaging and other soldiery shenanigans. This particular group of Scotts decided to kill the watch, take the ship and steal it. Oh, what a great idea! The stories that would be told of this great escapade. So they did take the ship and cast off before the rest of the crew made it back. Ha Ha Ha, what a caper!!!

The ship was found 2 weeks later adrift in the mid Atlantic as none of these brilliant ancestors of mine had any idea of how to sail. The ship was retaken, most of my clansmen were sent back to the UK as prisoners and later hung.

The leaders of the clan were minor Scottish Nobels and so were sent to Jamaica to be dealt with. Luckily enough for my ancestors the Governor of Jamaica was a distant relative and so they were released. This was the beginning of the Edgar clan plantation in Trelawny, Jamaica established by Alexander Edgar in 1720.
So based on this family story I wanted to build a typical British 6th rate coastal ship that would have been used during that time. Even though the HMS Fly was not built until the late 18th century the style of ship is similar as to what was captured by my infamous ancestor.

Here is a reference from the Admiralty logs.

Joseph Griffin, Clerk of the Cheque, Kinsale. The Enterprise, Captain Mungo Herdman, has arrived from Cork with transports carrying soldiers and the Lively, Captain John Carleton, has brought some Scottish prisoners captured by the privateer the John of Jamaica, Thomas Blake, Master.

So I am planning on recreating the moment of celebration as the great caper was completed and the ship then sailed off into the sunset...

I have purchased the upgrade to the Fly, a carving from Russia for the Fly as well as several boxes of sailors, Scotts and British miniatures to bash my diorama. I am also planning on doing a bit of a bash on the kit as I want to create the Captain's cabin with actual windows that can be seen through into the cabin. I will also be creating lighting inside the build using flickering yellow LED lights to simulate candles and lanterns. I will also be adding some additional components, like the galley stove under the forward deck and some other internal features on the lower decks. I'm also going to try and figure out a way to make the transom windows removable for a full interior view of the Captain's cabin. Maybe a hinge or something along those lines.
Here are the figures I purchased to populate the ship. I just need to add a set of British naval troops to the set. They'll all be dead of course but I think a few dangling from the rigging or laying on the deck would be appropriate.

I have purchased the David Antscherl book on the Pegasus build (same as Fly) as well as the supplement for rigging and sails for Swan Class ships.

The actual kit opening I will skip, as that is in many build logs but here are the pics of the kit and pieces.
I will be beginning the keel soon and going back and forth between completing my Bluenose and this build.

I apologize in advance for all the mistakes I'm going to make, the too many questions I will be asking and the artistic license in my bashing and creating of this pseudo historical diorama of crazy Scotts. I'm sure much drinking was involved in the decision making process.